Coveo Solutions Inc, a Canadian software company, announced on Wednesday, November 24, that is has raised a total of C$ 215 million in gross proceeds from its initial public offering (IPO).

The company was reportedly expecting gross proceeds of about C$ 150 million to C$ 200 million.

The Quebec, Montreal-based company, which began trading under the ticker of ‘CVO’ on the Toronto Stock Exchange (TSX) last week on November 18, has now closed its IPO.

It first filed for an IPO earlier this month on November 3, stating in its prospectus that the company raked in a revenue of about C$ 64.9 million in the fiscal year ending on March 31, 2021. 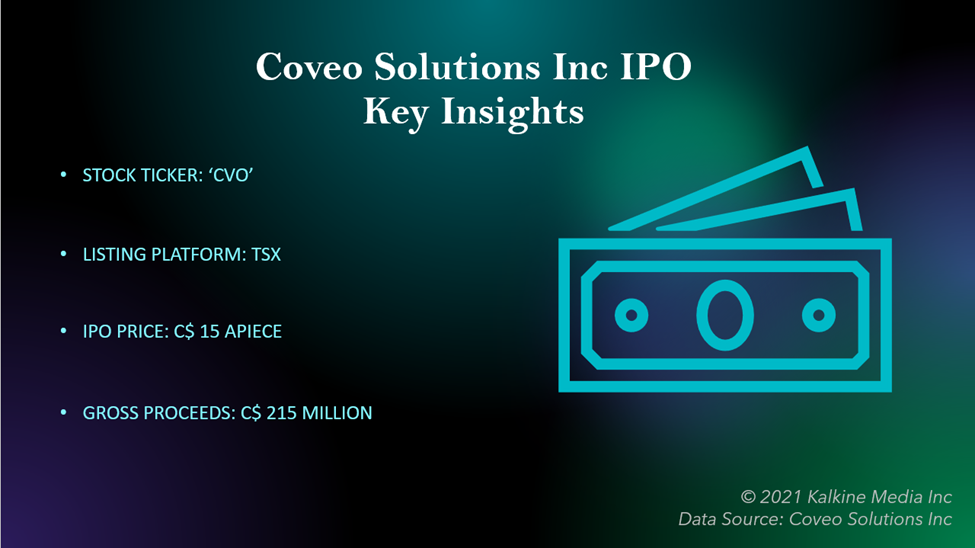 Coveo Solutions added that by the end of September 2021, its top line for the past one year had expanded to C$ 71.9 million.

At its IPO, the tech enterprise is said to have sold about 14.3 million shares at a price of C$ 15 each.

Now that the IPO is closed, Coveo Solutions’ over-allotment offer is set to be in effect for the next 30 days, which provides the option to buy another 2.15 million shares at the same IPO price of C$ 15 apiece.

If this offer is exercised to its full capacity, Coveo Solutions’ gross proceeds could rise to about C$ 247.3 million.

The IPO was handled by a pool of underwriters headed by BMO Capital Markets, who have been given access to the over-allotment offer.

It went on to rebrand itself as ‘Coveo Solutions Inc’ later that same year in October.

Having been in the business for a while now, Coveo has been expanding into newer markets and growing its operation. Most recently, it purchased a London, UK-based startup named Qubit that focuses on AI-powered merchandizing.

Now that its stock are up for grabs, investors interested in Coveo can explore its options on the TSX.