Ascent Resources IPO: When can you buy this natural gas stock?

The United States-based Ascent Resources LLC is reportedly looking to go public, and it could attain a market valuation of around US$ 6 billion.

The news of a potential initial public offering (IPO) comes when the IPO market is weak. In 2022, the markets have remained volatile due to some macroeconomic factors and unlike 2021, the IPOs and mergers of special purpose acquisition companies (SPACs) didn't perform as per the expectations.

Many companies have cancelled or delayed their IPO plans due to increased volatility. Due to the ongoing war between Ukraine and Russia, energy prices remain elevated, and that could be a favourable moment for Ascent Resources to consider an IPO.

If Ascent Resources IPO happens this year, it would be one of the biggest public debuts in the US. Let's take a look at the significant details about the company and its expected public debut plans.

Oklahoma City-based Ascent Resources focuses on acquiring, developing, and producing natural gas and oil. It is owned by private equity firms like the First Reserve Corp and the Energy & Minerals Group.

Both the firms are reportedly in talks with Barclays Plc and Citigroup Inc to advise on Ascent Resources IPO.

To go public, Ascent Resources will have to file all the necessary documents required for an IPO with the US Securities and Exchange Commission and then seek approval from the regulatory authority.

It is reported that the natural gas producer could go for IPO confidentially with the SEC this month, and Ascent Resources could get publicly listed in the second half of this year. 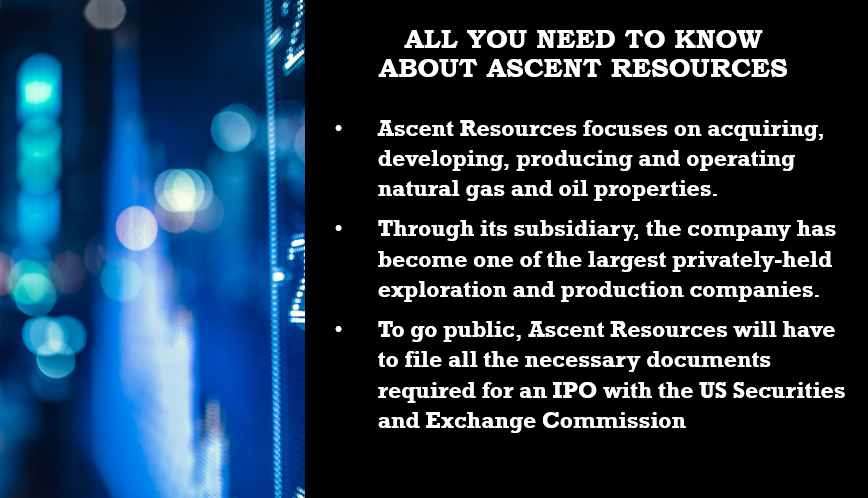 Earlier this week, some published reports suggested that Ascent Resources was in talks for a tie-up with Gulfport Energy Corp, a natural gas exploration and production company in the United States.

It is expected that if Ascent goes public, it will give a chance to the buyout firms to retain the option of exploring a buyer for the company in future.

Last year, Blackstone Inc had got a deal of US$ 615 million to sell Vine Energy. The move came five months after Vine had got listed in New York.