Bank of Canada hikes interest rates again: All you need to know

As inflation continues to rise, the Bank of Canada raised interest rates again on June 1. The interest rates were hiked by 0.5 per cent, bringing the benchmark overnight rate to 1.5 per cent.

Also Read: 5 top TSX stocks to buy in June while preparing for recession

Some analysts believe that this is not the end, and people should brace themselves for further rises in the months ahead. The interest rate hike is part of the central bank's plan to keep inflation under control.

Following a rise in April, the Bank of Canada's largest single increase in 22 years, Governor Tiff Macklem, had indicated that the interest rates might rise above the current range of 2 per cent to 3 per cent to control inflation.

According to Statistics Canada, the consumer price index in Canada increased 6.8% in April compared to the prior year. Groceries increased 9.7% year over year, while fuel increased 36.3%.

It is believed that people with lines of credit and consumers with variable rate mortgages will be affected immediately by the increase in interest rates.

What's happening with the Canadian economy?

According to Statistics Canada, the country's gross domestic product (GDP) grew at a 3.1 per cent annualised rate in the first quarter, demonstrating the economy's resiliency and showing solid growth in domestic demand and consumption. Meanwhile, inflation is expected to reach 7 per cent in May, a four-decade high.

According to reports, the job market in the country is also quite tight. In April, the unemployment rate fell to a new low of 5.2 per cent, and job openings reached a new high, all evidence of an economy that has run out of spare capacity.

After borrowing significantly during the COVID-19 pandemic to participate in the hot property market, Canada's economy is expected to be particularly vulnerable to increasing rates. 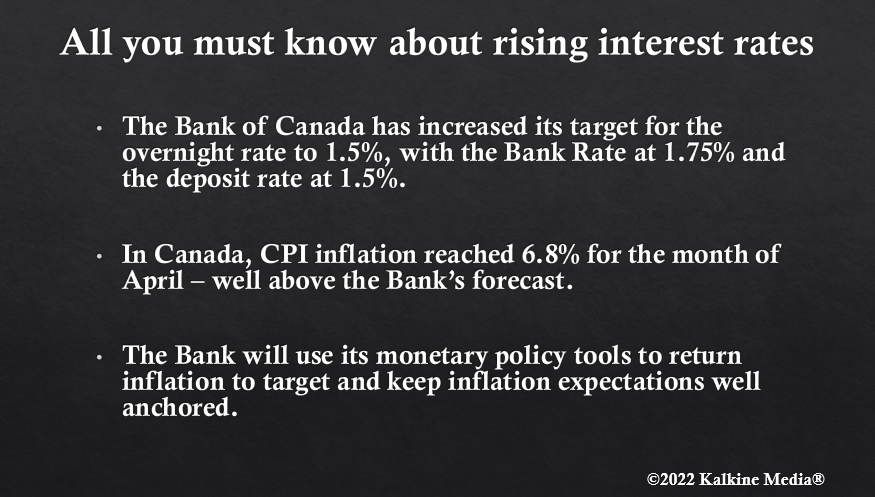 In a statement, the central bank said that it raised its overnight rate goal to 1.5 per cent today, with the Bank Rate at 1.75 per cent and the deposit rate at 1.5 per cent. The bank is also maintaining its quantitative tightening stance (QT).