What is Syn City crypto? All you need to know

The offering started on January 7 and is expected to run till Monday, January 10. After this, Syn City is scheduled to begin the next and final stage- Liquidity Bootstrapping Pool (LBP) token auction event.

Notably, the LBP event will be open for everyone as Syn City is under the decentralized finance (DeFi) ecosystem.

What is Syn City?

It claims to be the world's first mafia metaverse blockchain-based game, and it was built by a team of experienced game developers.

Syn City brings syndicate-style and mafia gameplay on the blockchain, and its native token SYN will give the users a unique chance of earning. 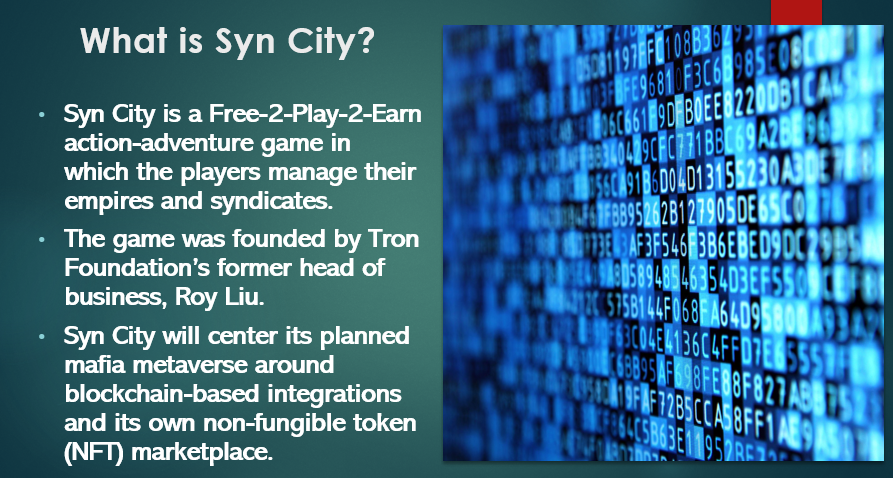 The action-adventure role-playing game is based on the concept of building a syndicate and accumulating money and power. Syn City will allow users to manage, trade, and acquire members of their syndicate.

The SYN crypto will allow users to participate in events to play and earn. Meanwhile, the governance rewards will also enable users to earn in cryptocurrencies.

If you are into metaverse and this cryptocurrency excites you, you could keep an eye on the LBP and join it once it is open.

Users will require a wallet compatible with platforms like WalletConnect, MetaMask, and Gnosis Safe, among others.

What is Syn City crypto? All you need to know

After checking the Compatibility, users will have to connect their wallets with either of the platforms and select the number of SYN tokens to purchase it.

Notably, Syn City is gaining traction, and on January 7, user-generated content (UGC) creation platform Overwolf announced that it was investing in the metaverse game.

Also Read: What is NinjaFloki crypto & why has NJF coin rocketed to its ATH?

So far, Syn City has reportedly raised eight million US dollars in investments, and its partnership with Overwolf will allow both companies to monetize their UGC.