Triangle Energy (Global) Limited (ASX: TEG) is an oil production & exploration company, based in Perth, Western Australia. It is currently the registered operator of the producing Cliff Head Oil Field with a 78.75% interest, in addition to a 45% JV interest in the Xanadu-1 Joint Venture oil discovery (TP/15) and a 50% interest in the Mt Horner Production Licence (L7(R1)1). Additionally, TEG holds a 33.34% equity interest in State Gas Limited (ASX: GAS).

The Cliff Head operations, located almost 10 kilometres off the Western Australian coast at a water depth of 15-20 metres, was the first commercial oil operation to be developed in the offshore Perth basin and commenced production in May 2006. The current production license WA-31-L covers over 72km², with the field spreading more than 6km². It includes the one and only offshore Cantilevered jack-up rig and offshore Arrowsmith stabilisation plant in the underexplored Perth basin.

The anticipated rise in demand for sweeter crude has boosted margins over the Brent Crude prices in the recent quarters, considering IMO 2020, which restricted the usage of marine fuels with a sulphur content higher than 0.5%.

In July 2018, Triangle Energy (Operations) Pty Ltd, a TEG subsidiary, took over the operations as the registered operator, focussing on maximising the operating margins and the economic life of the offshore Cliff Head Alpha platform, and onshore Arrowsmith Stabilisation Plant.

During 2019, Triangle progressed on the target identification to further expand the production capacity and economic life of Cliff Head operations. TEG prioritised prospective areas close to the Cliff Head platform with the possibility of operating them with minimum capital requirements.

As Triangle Energy enjoys stable production from Cliff Head operations after the recommencement of CH-13 well, ramping up the daily production to more than a 1,000 barrels of oil, the Company continues its quest to identify and evaluate new promising lands in and around the existing Cliff Head platform.

Several workovers, infill and satellite drilling opportunities within the range of the Cliff Head's Cantilevered jack-up rig were identified during the asset reviewal studies in the first half of 2019. A detailed evaluation for the appraisal of the opportunities followed by the investment decision (Cliff Head Renewal Project) commenced in mid-2019.

The current reserves for the Cliff Head field stand at 1.71 MMstb or Million stock tank barrels (as at 30 June 2019) and will add an additional 2C Contingent Resource of 3.13 MMstb on approval of the final investment decision for the upcoming projects.

The company launched the Cliff Head Renewal program with three prime objectives, which are- 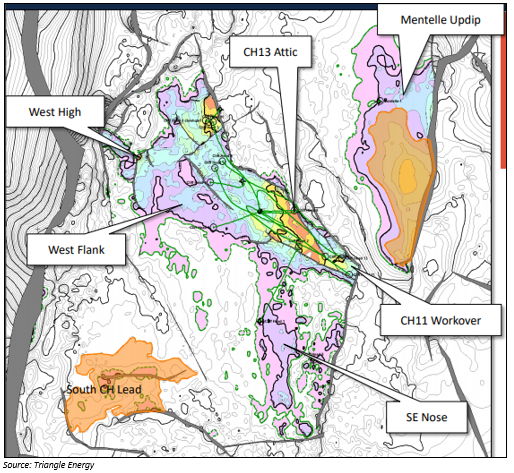 The opportunities for Cliff Head Renewable Project include –

The reprocessing of the 3D seismic data was completed at the end of December 2019, with the interpretation of the data planned during early 2020. The final investment decision of the projects would follow the validation from the geological data for which the reprocessing of 3D seismic data was completed in December with interpretation of the data to be revised soon, to build an advanced geological model of the field.

The final investment decision on the prioritised targets is still awaited and could lead to the economic life extension and increased throughput from the Cliff Head operations. The Company plans to start the Cliff Head Renewal Project development well drilling either during 4Q20 or 1Q21.