Are electric vehicles green? This was one of the most quizzed questions of the last decade.

We say electric vehicles are green as long as power at the charging point comes from a renewable power source or else, we would end up transferring emissions from the transportation sector to the power generation sector.

The EV or electric vehicle is probably the most trending word we have come across but why not a cleaner power solution for domestic sectors or for industrial sectors that consume even larger energy.

Yes, that’s happening. The long-term power producers are switching to renewable power stations with decrease of per unit cost of energy generation.

However, renewable energy needs to be stored to flexibly cater to the increased demand during different time intervals and when the renewable power station doesn’t operate such as in the absence of sunlight or wind for solar or wind power plants, respectively. Consequently, the energy storage industry and power players seek viable options for the storage of renewable energy on large scales, enough to provide electricity to an entire city.

Batteries used in consumer electronics or even EVs contain elements such as lithium and cobalt, which are not abundant in nature and are also expensive, making this solution more unviable.These mega batteries must be scalable and long life with the ability to charge again and again.

One solution that the world is seeking is Vanadium Redox Flow Batteries (VRFB). In fact, China is already developing a 200MW/800MWh vanadium flow battery in Dalian, using ~6,960 tonnes V2O5 and it is also expected to become the world’s largest battery.

Vanadium batteries have long lifetime of up to 20,000 cycles, which is much more than a conventional lithium ion battery. The vanadium redox flow batteries also register minimal degradation in activity in the first 20 years of operation and offers huge scalability such as Dalian’s battery of 200 MW at a competitive cost. Vanadium ions in different oxidation states are used to store electrical energy, and ions change colour with the change in oxidation state.

The steel industry accounts for the lion’s share of the vanadium demand. And, vanadium nitrogen demand continues to surge, with an upsurge especially from the Chinese rebar, batteries and alloy sectors. Almost 50% spike in demand for vanadium from China, anticipated to account from the implementation of the Chinese rebar standard, to up to 15,000 tonnes per year.

The development of large-scale primary vanadium projects such as Gabaninthais essential to bridge the demand-supply gap.

The project has an initial LoM (life of mine) of over 16 years and extensive opportunities for economic life extension with one of the lowest cash cost of US$4.04/lb V2O5. GVP is expected to produce 12,800 tonnes of V2O5 a year with high purity of over 99%, making it suitable for all major applications. 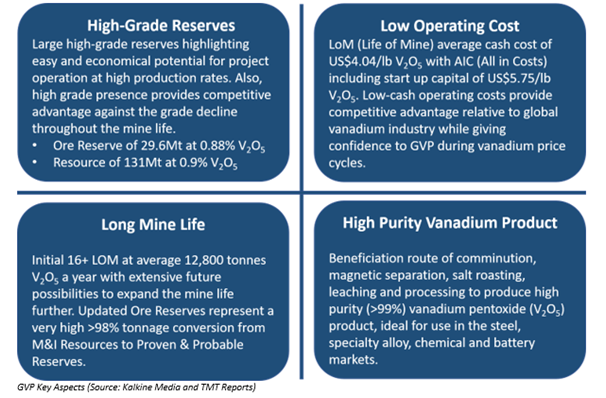 At present, Technology Metals is negotiating with Northern Australia Infrastructure Facility (NAIF), a $5 billion facility set up as an initiative of the Australian Federal Government, to secure financial support to progress the development of the globally significant large-scale, low-cost, long-life project. A general meeting of the Company has been scheduled for 4 May 2020, from which several important decisions can be expected.

Meanwhile, TMT is progressing on securing environmental clearances for the vanadium project and expects to initiate the FEED (Front End Engineering Design) study on the GVP.

With surge in demand for vanadium, the demand-supply gap is anticipated to widen and require large-scale, long-life vanadium projects such as Technology Metals’ Gabanintha. The world’s largest single primary vanadium producer, GVP, once developed, is expected to play a key role in meeting the global energy storage demand.

CLICK HERE FOR YOUR FREE REPORT!
Tags:
Mining ASX:TMT
All pictures are copyright to their respective owner(s).Kalkinemedia.com does not claim ownership of any of the pictures displayed on this website unless stated otherwise. Some of the images used on this website are taken from the web and are believed to be in public domain. We have used reasonable efforts to accredit the source (public domain/CC0 status) to where it was found and indicated it below the image.