On 2 October 2019, ISX announced that in consultation with ASIC (Australian Securities and Investments Commission) and in the light of volatility of share price, Australian Securities Exchange decided that it was suitable to suspend trading in the securities of ISX with immediate effect under Listing Rule 17.3, awaiting the result of enquiries to be made by AISC and ASX into numerous issues regarding ISX. The securities were supposed to be suspended until further notice.

The Company intends to build Australia’s first digital and digitised asset exchange and has invested in NSX.

Let’s dig deeper to understand the stance of ISX.

iSignthis operates in the information technology sector and provides transactional banking services through remote identity verification and payment authentication. ISX serves the anti-money laundering and counter terrorist funding entities and e-Commerce operators and is based out of Australia.

iSignthis was suspended from trading on ASX since ASX served a 11 minutes of suspension notice from quotation on the 2nd Oct 2019 due to “share price volatility”. The Company sued ASX with regards to trading suspension.

Other Key highlights from the period includes of the following:

ISX registered unaudited revenue of ~$7.7 million in 2Q FY20 gained from different industry segments as follows: Online video gaming – contributed 46% to total quarterly revenues, followed by Options/CFDs/FX, which contributed 13% to the total quarterly revenue, followed by Credit providers at 9%, Online gambling –at 4%, Crypto/digital currency at 2%, and others contributing around 26%. 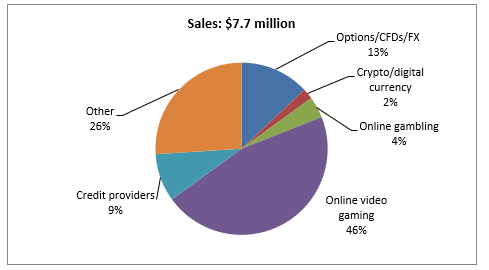 Net cash from operating activities in 2Q FY20 stood at $1.6 million backed by customer receipts and government grants. Customer receipts decreased by ~20% from 1Q FY20 to reach $8.4 million in 2Q FY20. The decrease was due to suspension from ASX and impacts from COVID-19 in the quarter.

Customer receipts for 1H FY20 were recorded at $18.9 million. The Company received government grants and tax incentives of $353k in 2Q FY20. 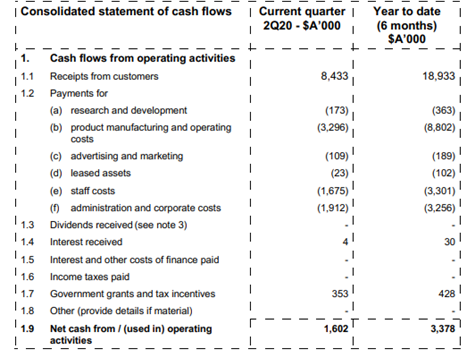 On 17 July, ISX held an AGM through Zoom video call and provided an update on its strategy and financial review for the period ended 31 December 2019 and took shareholders queries.

The Company mentioned that it aims to ramp up its business by achieving new contracts with entities. ISX intends to continue growing its regulated business in operations and geographically in Australia and Europe and expand into New Zealand, Brazil, and Canada in next two to three years.

Furthermore, iSignthis expects to continue expanding its Probanx and Baltic Banking Service offerings worldwide by supplying clients, with a core banking system, and a provision to access SEPA network.

iSignthis intends to keep mulling for acquisition or growth opportunities in 2020/21 in Europe and North America to grow its payment and transactional banking business. The Company would also apply for new licences to build its payment and account operations.

iSignthis announced to launch Flykk, an online and app-based eMoney service, in August. Flykk is expected to utilise its SEPA network to allow quick fund transfers among merchants and retail customers. The Company expects the Flykk platform to boost its business growth. The Flykk® app has been approved by Apple Inc, and the release is expected during August 2020 to worldwide app store.

The Company’s relationship with Visa is expected to be terminated.

The Company would utilise its own platform, and work with NSX through the ClearPay JV to develop a platform that will considerably uplift NSXA’s reputation to the broking and investment community and issuers who wants to go public via IPO. ISX aims to make NSX as Australia’s first digital and digitised asset exchange.

iSignthis increased its stake in NSX through a Placement led by company’s subsidiary Probanx Holdings Ltd. The $1.5 million placement was raised by pricing more than 16.48 million shares at $0.091 per share.