Australia On Tightening Its Cyber-Regulation: Glance at AR9 and TNT

Information and communication technology form an essential part of our daily life. It is difficult to visualize our lives without technology, be it using a computer at home or office, doing online transactions, conducting banking services, and many more. As we progress further, the dependency on technology is increasing. The rise in the demand for technology is also giving birth to various crimes that take place online. Hence, there is an urgent need for a safe online environment where people feel protected while performing any duty online. It helps to build trust and confidence.

During the lockdown period in Australia, many people were performing their duties from their home, which was only possible because of advancements in technology and network services. With tasks carried out from remote locations on the rise amid social distancing guidelines, the demand for tools and services to facilitate online business activities rose. This also led to the networks becoming susceptible to an increase in cyber-attacks.

As per the report released by the Australian Cyber Security Centre, there was an increase in COVID-19 themed malicious cyber activity.

According to Scamwatch, a website run by Australian Competition and Consumer Commission recorded more 3,400 scam reports which resulted in A$1,790, 000 in reported losses since the outbreak of COVID-19. The common scams during the period were phishing for personal information, online shopping, and superannuation scams.

Scamwatch has urged people to remain watchful of the COVID-19-related scams and requested not to provide personal, banking or superannuation details to any strangers approaching.

Steps by the Australian government to prevent cyber-attack:

The Australian Cyber Security Centre (ACSC) offers advice to support essential infrastructure providers safeguard themselves from cyber-attacks as critical staff members, during the pandemic, are performing their tasks from remote locations.

Critical infrastructure facilities, including power and water distribution networks, and transport and communications grids, are likely targets for malicious cyber activities in Australia and other geographies.

Abigail Bradshaw CSC, the Head of ACSC, said that their top priorities include protecting vital infrastructure and the systems that control essential services.

In a media release on 30 June 2020 by Prime Minister, Minister for Home Affairs, and Minister for Defence, it was announced that the Federal government would invest A$1.35 billion in improving the cyber security systems over a couple of years. The funds would assist Australians via the Australian Signals Directorate (ASD) and the ACSC.

The Australian PM also highlighted that there had been an increase in the frequency of cyber activity. At present, the safety of the country’s economy, national security, and sovereignty are the key priorities. 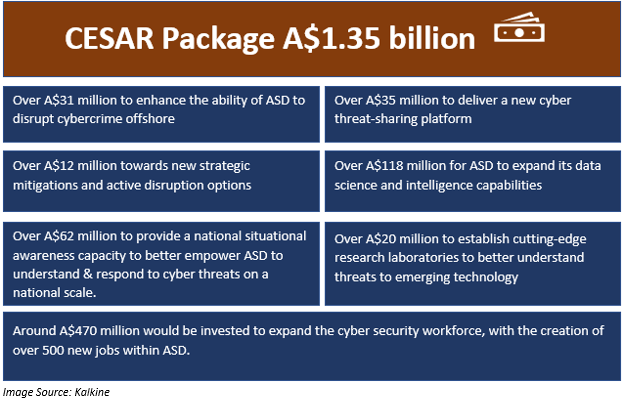 On that note, let us look at a few ASX-listed companies from the cyber security world and see their performance during the COVID-19 period.

archTIS Limited is a Canberra-based company that focuses on the design and development of products, solutions and services for safe information sharing and collaboration. The product and solutions offered by the Company. The Company was established in 2006 and has more than ten years’ experience in providing secure information & identity management services and solutions within the highest security levels of the Australian government.

AR9 shares have shown significant growth of ~83% in the last one year. The shares provided a decent YTD return of ~31% and an impressive 183.33% growth in the previous three months.

On 13 July 2020, the Company announced the renewal of the software maintenance and service deal with a Commonwealth national security agency for A$141,200. Under this agreement, the Company would provide maintenance & support services for an active Kojensi platform for another 12 months. Apart from this, the Company renewed an independent 12-month services agreement with a national law enforcement agency worth A$259,090.

On 18 June 2020, the Company announced that Northrop Grumman purchased an initial 50 licenses of archTIS’ Kojensi cloud platform.  These licenses were purchased to share information for its Business Development teams in a secure way.

The Kojensi Platform would be used for the preparation of Government and Defence tender between Northrop Grumman Business Development team members in Australia, the US plus their partners.

MCA Partnership and Appointment Of DISP:

On 15 June 2020, the Company announced that it significantly strengthened its Canberra business via north security | digital’s appointment to the Defence Industry Security Program (DISP) and entered a robust teaming deal with McArthur Associates Pty. Ltd. (MCA).

The DISP program will provide the Company through the north, with improved prospects to work with Defence & simpler access to Defence security services.

This, along with the MCA deal, would significantly bolster the Canberra business of the Company.