The broader equity market revival since March crash is being closely watched amidst resurgence in coronavirus cases in Australia. Victoria, Australia’s second-largest state, reported a record single-day jump of 288 new cases in the second week of July.

On that backdrop, let us cast our lens over few Gold penny stocks:

Aruma Resources is an exploration and development company focused on its gold project portfolio in the Eastern Goldfields of Western Australia.

On 7 July 2020, Aruma Resources announced expansion of its Saltwater Gold Project by identifying a large priority exploration target in the Pilbara region of Western Australia. The company has applied for Exploration Licence E52/3846 covering an area of 96 km2 which is located on the eastern extent of the Saltwater project area.

AAJ claims that the Saltwater Project presents the company with an exciting early stage gold exploration opportunity in an area which is under explored.

Red Mountain Mining focuses on new energy metals with assets located in DRC. The company is currently working on exploration at its Mukabe-Kasari copper-cobalt project.

On 29 June 2020, the company announced that it has applied for 3 tenements comprising 100% ownership of Koonenberry, prospective for gold in northwestern New South Wales (Koonenberry Gold Project), which covers ~657 km2 with a geologic setting considered analogous to the prolific Victorian Goldfields located in south-eastern Australia. 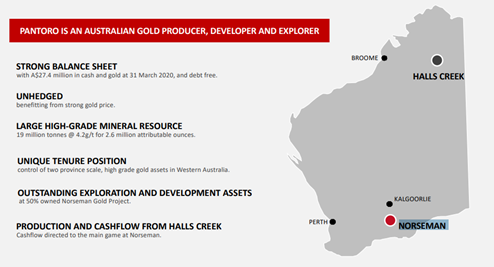 PNR enjoys strong cash position with A$27.4 million in cash and gold and being debt free. The company also revealed itself to be unhedged backed by strong gold prices. PNR also drew attention to its large high grade mineral source which stands at 19 million tonnes @4.2g/t for 2.6 million attributable ounces.

Resource estimates are as follows:

New user. Create account.
forgot Password
Enter the email address associated with your Kalkine account.
Set new password
To verify your email, we've sent a One Time Password (OTP) to
Which are the top tech penny stocks for Q3 CY21?
We use cookies to ensure that we give you the best experience on our website. If you continue to use this site we will assume that you are happy with it. OK