The results indicated the continuation of the copper and gold enriched Base Metal Horizon and routine assay process detected platinum, palladium and gold (3E PGM).

Recently, POD concluded additional rock chip sampling and has found anomalous platinum, palladium and gold plus copper in the area of interest.

Moreover, a potential for around 1.2km lengthy extension of Parks Reef’s western flank is also uncovered through magnetic imagery. POD’s results from the gathered rock chips comprise of copper up to 1,070ppm and platinum up to 14ppb, palladium up to 16ppb and gold up to 34ppb, notwithstanding the limited outcrop available for sampling.

POD believes that the results of PGM hold significance for the Company, taking into account the absence of surface signature normally observed in Parks Reef, for which the currently known mineralisation was discovered utilizing shallow RAB drilling.

A notable observation among the anomalous PGM results is their consistency in lying along the mafic/ultramafic contact interpreted from the magnetics. Moreover, the absence of outcrop for sampling in the area is steady due to increased susceptibility of ultramafic rocks to weathering. 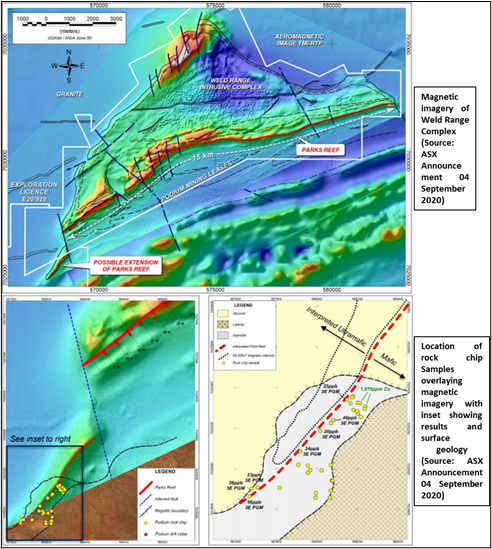 Another upside for Podium is the location of highly anomalous copper that is in line with the noted stratigraphy in the Parks Reef drill results. In addition to this, copper is found to be in the hanging wall next to and on top of the PGM enrichment.

As the Company continues to pursue its growth strategy, it is progressing with the systematic drilling at its extensive Parks Reef PGM project to delineate an immensely substantial resource base.

POD looks forward to expanding the scope of the total resources at the project to a collective length of 8.5km through current drilling.

Re-assaying of drill samples for base metals from the mineralised zones is currently underway. Subsequently, POD plans to commence resource modelling with a target to upgrade resource for Parks Reef by October 2020. Additionally, POD shall further assay select drill holes from current drilling for rhodium to confirm the persistence of rhodium linked with POD’s PGM Mineral Resources.

Furthermore, POD is currently engaged in planning its upcoming drilling programmes and expects to bring in an additional exploration of the western extension within this work. Based on the results from rock chip samples supporting POD’s interpretation of the magnetic data, POD suggests utilising angled RC drilling to test for reef style mineralisation within this prospect. This RC drilling is like the methodology used for POD’s resource drilling.

Overall, POD remains optimistic that successful results from this drilling shall help to extend the exploration potential and resource target area for Parks Reef Project.