Regarding itself well-positioned to add value to the US domestic uranium supply squeeze, GTI Resources Limited (ASX:GTR) has been gaining massive market attention. During the last week, the Company completed an aeromagnetic survey at the Niagara (Kookynie) Gold Project, raised $ 1.81 million via capital raising and was granted a 5-year extension of term on its Kookynie gold exploration licence E40/0342.

Subsequent to these significant accomplishments, the Company recently updated that it has secured a significant data package to enable rapid evaluation of the new leases it is acquiring and currently held ground. It will also provide valuable insights for planning the next phase of exploration in Utah.

The significant data package secured by GTI was identified during its due diligence enquiries into the two mineral leases that it is acquiring from Anfield Energy Inc.

The company’s review of the data package serves to further reinforce interpretations and validate GTI’s recent acquisition of two State of Utah mineral leases from Anfield.

According to Executive Director Bruce Lane, the historical data package gives GTI a head-start in planning the next phase of exploration in Utah. The data allows for accelerated evaluation of the currently held ground, assessment of adjacent ground and much greater refinement of drill targets.

Moreover, it is of particular interest for the Moki project for which it offers drill intercept information, maps and an evaluation report. Significant historical drilling took place on this property.

GTI believes that acquisition of this data for the Moki project may help in understanding the local mineralisation and determining if there is a trend relationship with known ore-grade mineralisation at the Tony M Mine.

Acquainting with Moki Project: Last year in September 2019, GTI Resources acquired eight properties prospective for uranium and vanadium mineralisation in Utah which have a total of 181 claims and a total area of 1,505 hectares. Moki was part of this acquisition and is located near Ticaboo, Utah, positioned immediately east of the Tony M Mine owned by Energy Fuels Inc.

In late 1970s, the Tony M Mine was developed. Production has been reported as recently as 2008 by then mine owner Denison Mines (USA) Corp. In 2012, the mine was bought by Energy Fuels Inc as part of a larger transaction.

Close to 1 million lbs of U3O8 was extracted from the mine via intermittent mining through 1979 and 2012. A global resource (Indicated and Inferred) of over 20 million lbs U3O8 is the recent resource estimate from June 2012 reported by Energy Fuels Inc (for Tony M Mine and adjoining mineral resources).

On 7 July 2020, the Company announced the acquisition of two State of Utah mineral leases from Anfield. The acquisition joins the Jeffrey and Rats Nest projects into a far bigger contiguous tract covering 5.5km along interpreted strike of mineralised trend.

The Company is currently awaiting drill core assay results from drilling completed at the Jeffrey project in June 2020. The reconnaissance stage drill program at Jeffrey-

This discovery increases potential of the Jeffrey project to host significant uranium and vanadium resources, similar to that historically produced. 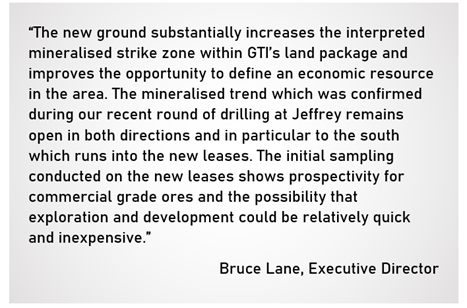 Data generated in this work will support the generation of drill targets for the planned next phase of exploratory drilling.