Emergence of electric vehicles has ignited competitive race for the paper-thin, long lasting battery with high-energy density and thermal stability. Electric Vehicles of present and future would be fuelled by chemical energy stored in batteries that powers the electric motor and enables EVs to be the cleanest medium of mobility.

Batteries require a high-quality cathode (usually made from metals or composites such as Lithium, Cobalt and Nickel) while the high-performance anode is made out of graphite.

Spherical graphite is one of the most superior choices for anode, attributed to the shape and form of spherical graphite, which allows a highly efficient packaging of particles in the anode, maximising energy and recharge capacity of the battery.

EcoGraf Limited (ASX:EGR), an eco-friendly and sustainable graphite and battery components player, is advancing towards the commercialisation of its high purity spherical graphite product for the lithium-ion battery market.

With the burgeoning demand for battery graphite in the Europe, US and North East Asian markets, EcoGraf plans to vertically integrate the business streams through its reliable supply of EcoGrafTM battery graphite products.

EcoGraf’s Kwinana Battery Graphite Facility: Introduction of a Premier Technology to the World

EcoGraf plans to build the world-scale EcoGraf™ battery graphite facility, one of its kind outside China. To envisage this plan, the Company recently conducted a $3.79 million share placement and share purchase plan.

Additionally, EcoGraf is involved in eco-friendly and economic recycling of graphite, which could be reused to improve the battery lifecycle efficiency. The TanzGraphite natural flake graphite business, commencing with the Epanko Graphite Project, would supply high-quality additional feedstock for spherical graphite processing facilities as well as serve long-term customers with high-quality graphite products used in the refractories, lubricants and other industrial segments.

Supply Contract with ThyssenKrupp, Customer Engagement in place prior to Plant Commencement

The German major would be supplied with 10,020 tonnes of Spherical Graphite and an equal amount of fines from the third year of commencement of the Kwinana plant with reduced amounts in early years.

EcoGraf had announced battery electrochemical results for its preferred feed materials tested during the recently concluded calibration and benchmarking program. Completion of the calibration program is a step forward towards the development of EcoGraf’s facility in Kwinana, Western Australia.

The performance test was conducted for electrochemical battery under certain cell configurations and follows almost 2 years of a pilot test program in Germany to optimise the processing technique and the flowsheet to ensure high-quality performance of the commercial product.

Read: Emerging battery technologies in the era of electric mobility

The test work was conducted at a prominent German research institute which specialises in battery test works and is credited by the global battery and electric vehicle manufacturers. Each of the spherical graphite (SpG15) product samples were developed under identical conditions and included the same electrode composition, electrolytes, and cell configuration.

Outcomes of the test include:

The selected feed samples (four in number) exhibited the following charge and irreversible capacity loss measurements for electrochemical performance analysis of each material within a lithium-ion battery. 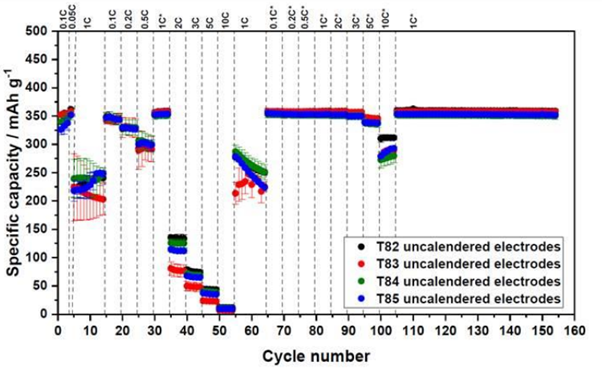 For each of the samples, rate capability test was conducted under a range of C-rate conditions. C-Rate indicates the rate of charging of the battery to its ultimate capacity.