Australian mineral resource and energy company, Dark Horse Resources Ltd (ASX:DHR) is primarily engaged in exploring for large gold deposits in tier-1 mining jurisdictions. The Company holds interests in the Las Opeñas and Cachi gold projects, located in underexplored mineral provinces that host world-class mines, in Argentina. Moreover, it has a 30% stake in Lakes Oil NL, an onshore natural gas firm with resources of over 11 TCF in Victoria.

As part of its 2020 strategy to re-position the Company by diversifying into world-class assets in the prolific gold and base metals mining jurisdictions, Dark Horse recently entered into a term-sheet agreement to acquire 100% of Tampere Gold Project in Finland and Bergslagen Tungsten Project in Sweden. To read more about the new acquisitions, click here. 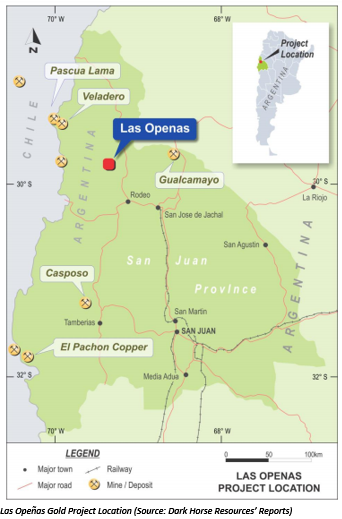 The lease covers 1,462 hectares and is located at an elevation of approximately 3,000 metres, free of glacier and with excellent access to the site. The mineralisation system at the Las Opeñas project consists of multiple veins and vein breccia, which varies from 200 metres to 2,200 metres in length with width up to 200 metres and open in all directions.

An initial Reverse Circulation (RC) drilling program at the project was completed in April 2019, which covered 1,536 metres across 17 priority targets. The program resulted in the confirmation of high-grade mineralised zones to moderate depths from surface, with five mineralised vein systems identified being Tramway, Rock Oven, Presagio, Vultur and Viscacha.

Presagio, the largest vein spanning across 3.7 kilometres within the Las Opeñas, holds a unique combination of veins and breccias, an area of interest that had been included in the drilling program and surface sampling programs.

Recently, Dark Horse announced that following the payment of a cash sum of US$23,650 to the vendor, the explorer gained a 25% stake in the Argentinian project. This also marked the end of all obligations on the Company’s front towards the first year in compliance to the exploration agreement. Upon achievement of next series of milestones, the Company’s ownership in the project would grow to 51%.

An extensive drilling program at Presagio is expected during the summer of 2020/2021, which would be later followed by a JORC Code complaint mineral resources estimation.

Dark Horse is also advancing on its key project in Argentina, Cachi Gold Project, which holds a lease package stretching over 46,892 hectares with potential for large-scale epithermal vein system. 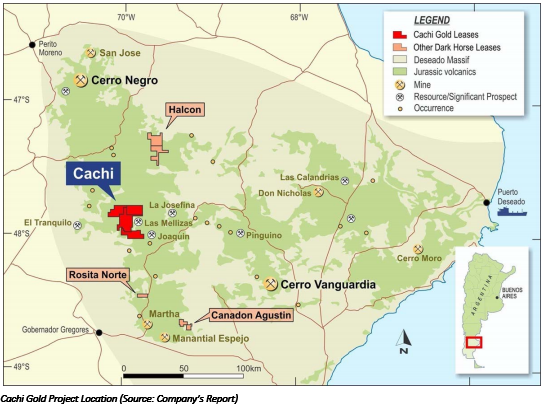 The project in the Santa Cruz province of Argentina is in proximity to several multi-million ounce, epithermal style gold-silver deposits such as AngloGold Ashanti Limited’s (ASX:AGG) Cerro Vanguadia and Newmont-Goldcorp’s Cerro Negro.

Deseado Massif, which hosts the Cachi project, holds over 28 million ounces of gold as mineral resources with development and commencement of 7 mining operations in the last 15 years enhancing the commercial aspect and the mining friendly nature of the region.

The Company has previously reported numerous anomalous gold and silver rock chip and trench samples, with individual surface sampling results up to 17.8 g/t gold. Five major epithermal vein systems are drill ready, with drilling being the next phase of exploratory work.

Open in all directions, the largest target at the project with a structural corridor of 1,000 metres in length and 315 metres in width is Vetas Cachi. At the project, the Company’s objective is to prove a JORC Standard Gold resource within 12 months and iteratively define larger resources over a maximum four-year period.

Dark Horse has recently renegotiated its next vendor payment and amended the expenditure investment commitments with Tres Cerros Exploraciones SRL. At the milestone of the new commitment towards expenditure investment for the June 2020-May 2021 period of a diamond drilling program spanning 2,000 metres, the Company would earn a 35% ownership of the Cachi Gold Project.

The Company has appointed Red Cloud Financial Services Inc as its financial advisor to assist with the development of its Argentine gold projects via various capital raising programs.

Dark Horse views having a portfolio of prospective gold properties in several different countries, aided by its large investment in Lakes Oil, as a robust path forward in realising shareholder value.