Corazon to recommence drilling at Lynn Lake, Stock Zooms up 100%

Corazon Mining Limited (ASX:CZN) announced the advancement on the preparations to resume the drilling program at the Lynn Lake Ni-Cu-Co Sulphide project in Manitoba, Canada.

The drilling program at the Lynn Lake is focussed on the priority exploration targets at the Fraser Lake Complex (FLC) which is 5 kilometres from the Lynn Lake mining centre. The drilling activity was interrupted due to the increased water levels from the northern hemisphere spring melting.

Corazon is currently drilling a new compelling target at the FLC. Prior to the suspension of the drilling activity, the initial drill hole at the FLC namely, FLC2020-22, had reached the crest of the defined anomaly at a downhole depth of 523.4 metres. The Fraser Lake complex has so far showcased extensive prospective areas rich in sulphide mineralisation.

The drill hole (FLC2020-22) at the FLC is situated on the basal contact of the gabbroic intrusion which has been identified using various geophysical methods. The initial hole displayed increasing sulphide content between 1% and 8% from about 490 metres down-hole.

The drill hole FLC2020-22 intersected variable sulphide mineralisation from trace levels to the highly disseminated and interstitial concentrations with up to 30% within an interval as small as a meter. The dominating minerals in the sulphide mineralisation include pyrrhotite (iron sulphide), with variable quantities of pentlandite (nickel sulphide) and chalcopyrite (copper sulphide). 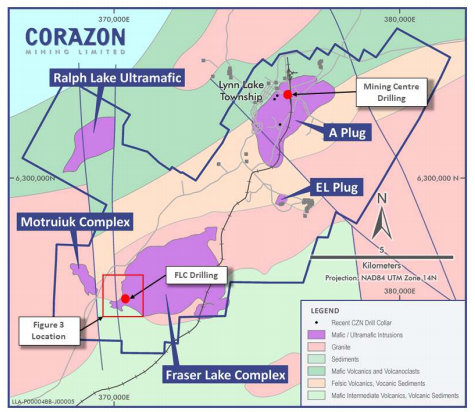 Corazon’s systematic approach on the exploration has defined the general architecture of the Fraser Lake Complex, identifying geophysical anomalies with potential for nickel-copper-cobalt sulphide mineralisation.

The current drilled target was also identified by ground magnetics using analysis of magnetic vector inversion (MVI), a new and advanced geophysical processing technique. The target is a flat lying magnetic feature at the basal contact of the intrusion, stretching across an area of at least 350 metres by 200 metres. The peak of the magnetic anomaly is located almost 450 metres below surface, with the base of the intrusion interpreted to be located almost 500 metres below the surface. Ever since 2019, Corazon has been using the MVI technique to identify and locate mineralisation to depths of at least 600 metres.

The closing date for the non-renounceable entitlement offer has been extended from Thursday 23 23 July 2020 to Thursday 6 August 2020. Corazon has already published the amended timelines for the same.

Corazon closed at $0.002 a share, an increase of 100% against the previous close, with a market capitalisation of $5.54 million.