Why Core Lithium (ASX:CXO) slipped on the ASX today?

The share price of mineral exploration firm Core Lithium Ltd (ASX:CXO) had a shaky start today. Despite witnessing strong growth for an extended period, the firm's shares slid 6% in the morning. The shares closed 5.7% down at AU$1.385 apiece.

Core Lithium has been on a major bull run over the past year, up 518% in tandem with the larger material sector, which increased 16%. Despite significant hurdles caused by Covid-19 induced lockdowns, the firm maintained its upward trend in the middle of the year, with a 265% increase in the six months. The corporation has grown by 125% since the beginning of 2022. The firm's stock has not lost its lustre in recent times, surging 56% in one month.

Why did Core Lithium fall today on the ASX?

On Wednesday, the Core Lithium share price is heading south, owing to weakness in the lithium industry and a dismal night of trading on Wall Street.

Today, it's not only Core Lithium that's in decline. Other lithium shares are also under significant pressure, with Pilbara Minerals Ltd (ASX:PLS) down 5%, Liontown Resources Limited (ASX:LTR) down 6% and Neometals Ltd (ASX:NMT) down 5%. 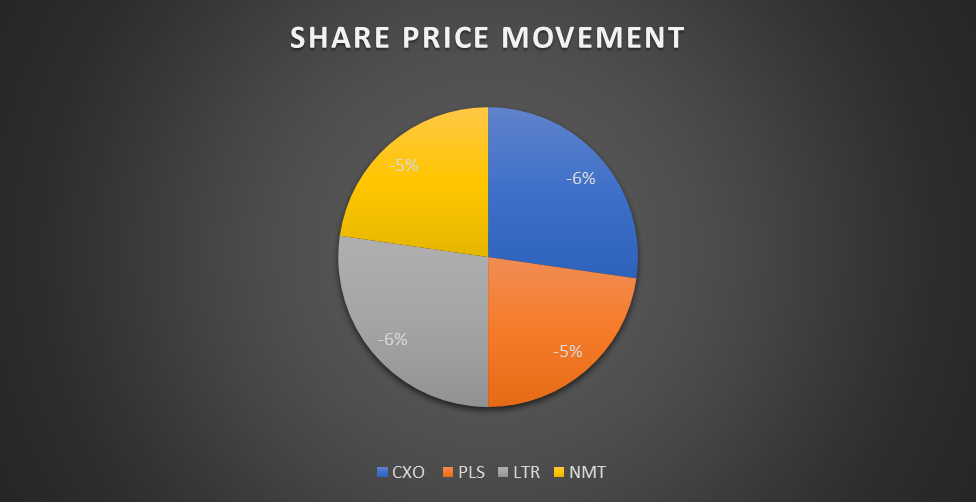 In addition, the drop might be due to traders taking some profit off the table today after extremely significant gains in 2022.

Moreover, Core Lithum's shares have been the strongest performers. This year, they are shattering the market, thanks to a slew of favourable news, including its partnership with electric vehicle behemoth Tesla and the acquisition of six mineral leases.

In February, Core has acquired six granted mineral leases, which contain over 30 historic pegmatite mines. The acquisition gives substantial value to the Finniss Project, allowing for the acceleration of resource and mine-life expansion goals.