New activity was impacted in the wake of COVID 19. Although most of the states have re-opened, consumer fundamentals have deteriorated now, including unemployment, income growth and demand.

Do Read: How deep the shroud of joblessness and Income uncertainty eclipse the Property Market?

In July, Fletcher Building reported a new completion period for the motorway between Puhoi and Warkworth. Waka Kotahi NZ Transport Agency was in negotiations with the company regarding the impact of COVID 19.

Now the motorway is expected to open by mid-May 2022 after COVID 19 restrictions delayed the earlier launch by the end of 2021. The opening dates would remain subject to unexpected challenges, including COVID 19.

In late-June, the company announced an early repayment of US$300 million of USPP Notes. These notes, issued in 2012, were the company’s most expensive debt having an average cost of funding of 5.4%. It expects to repay NZ$350 million, which includes net costs.

Earlier in June, FBU announced that amendments were made to its banking agreements to allow more flexibility in covenants. It was reported that the business has a strong balance sheet, but FBU was resetting the cost base for an uncertain environment.

James Hardie is expecting to release first quarter update on 11 August 2020. The company has also deferred Annual General Meeting 2020 to November from August.

In June, the company upgraded guidance for the first quarter 2021. It was noted that housing market activity is picking-up in North America. During the quarter, the company experienced volume growth and market share gains due to customer engagement and better-than-expected COVID 19 period.

The company had an improved liquidity and leverage position after acting on capital management and working-capital in mid-March; this led to strong leverage and liquidity position.

In Q1 FY21, the company expects North America Exteriors volume to be flat to +2% over the same period last year. The company has upgraded Q1 FY21 North America adjusted-EBIT margin guidance to 27-29% from 22-27%, and increased liquidity guidance to over US$640 million from US$600 million at the end of June 2020. FBU expects leverage ratio to be less than 1.8x from less than 2x as at 30 June 2020.

Recently, CSR Limited conducted its Annual General Meeting, during which it was highlighted that the company achieved good operational results, enhancing its financial position. For the year ended 31 March 2020, the company reported statutory net profit after tax of $125 million. 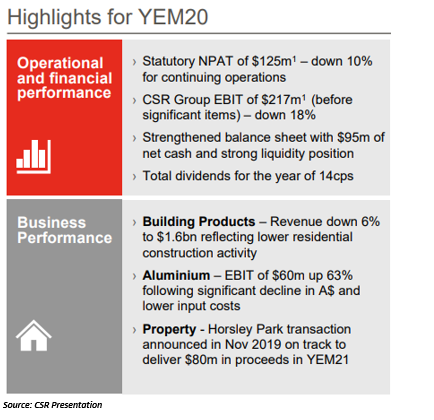 On trading update, Building Products’ revenue in ANZ was down 5% on a like for like basis for the initial 11 weeks of the current financial year. But the results for Australian Building Products were consistent with management’s pre-COVID forecasts.

The company acknowledged that lead indicators in Australia were down 19% in April and May against the same period last year. It also indicates lower activity for the year due to lagged demand for its products. Although there would be benefits from Government measures, the timing and extent remain uncertain.

In its property business, first tranche of the Horsley Park transaction remains on track to contribute $80 million in proceeds and $53 million to EBIT in the second half of the year. In Aluminium, CSR did not change its hedge position from its results announcement in May; 63% of net exposure to YEM21 was hedged at an average price of $2,826 each tonne.

Also Read: Will there be a Revival of Real Estate Sector in Post Pandemic Era?