Finbar Group Limited (ASX: FRI) is a real estate developer, primarily focused on residential development in Perth CBD and surrounding areas. The real estate developer has more than 25 years of time-tested business performance. In the last 23 years, it has paid fully franked dividends to its shareholders.

If we look at the pre-virus period, real estate markets had a decent run last year, and residential real estate was positioned favourably, owing to policy initiatives and lower interest rates that are much lower now.

At the beginning of this year, launch of the First Home Loan Deposit scheme made floor for first-time home buyers to invest in a residential property and avoid rental accommodation.

As interest rates are lower now, home loan rates have also come down in the recent past, and households with stable income will likely have better opportunities since there is a risk of demand problem in the near term, which may lead to attractive property prices.

Most of its projects are completed and the company continues to add more in pipeline with the latest being this month. Finbar is specialised in apartment development with ready-to-move in capability for its customers. Finbar to Rent, its subsidiary, is a property management service for current and future owners. 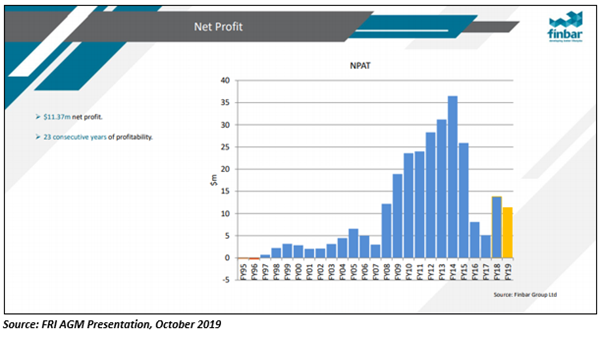 As a small business, it has the ability to adapt towards changing market conditions. Finbar operates in Western Australia, specifically in Perth CBD and surrounding areas. The company acquires land and carries development of properties. For large development projects, the company seeks to develop through equity partnerships.

Finbar outsources construction and design activities to remain agile in a market where project timing and acquisition are crucial for better returns and sustainability. Its business depends on a range of factors, including interest rates, resource sector activity, policy initiatives, employment rates, lending growth and credit availability to households.

Generally, the company does not seek to acquire land through debt funding, and development activities are carried through senior bank funding.

In the half-year ended 31 December 2019, the company reported net profit of $6.64 million compared to $1.89 million in the same period last year. The results were boosted by investment property revaluations and sale of completed stock.

At the end of the period, the company had cash of $31.2 million after a $12 million repayment of bank facilities and a reduction in debt facilities by $750k. Finbar’s share of completed stock through JV interests was $57 million out of the total $102 million, having sold an average of $6.1 million/month in the half-year period.

In February, the company updated that earnings in the second-half period would be boosted by completion of projects. It had pre-sale book of $116 million across its projects.

Although full-year profit guidance was withdrawn in the wake of COVID 19, the company has completed a few projects and added in-house sales team to the business.

Completion of Sabrina Applecross: In March, the company reported that the construction of Sabina Applecross was completed, and more than 50% pre-sales were secured, resulting in ~$60.5 million in sales. The project has 164 apartments with resort style features, including a swimming pool and gym.

Sales confidence and path to debt free: Darren Pateman, Managing Director, in May 2020 stated that there would be impact on sales confidence in real estate markets due to COVID 19, and called for stamp duty reforms by the State Government to restore the confidence.

He stated that settlements in Sabina Applecross continued with earning contribution expected in the second half, but foreign buyers have been unable to complete settlement formalities. After the commencement of settlement at Maylands, the company would be debt free with $187 million in completed stock, and around half of $187 million is attributable to the company as JV interest.

In-house sales team: In May, the company appointed experienced professionals from Knight Frank, who have worked together for 13 years as well as with Finbar in external sales capacity since 2006. The sales team would focus on recently completed projects. It was a strategic decision of the company that would augment the relatively new property management service, Finbar to Rent.

It was highlighted that the upcoming Civic Heart is a $400 million project, and a well-resourced internal team with an intense understanding of the product and the Company’s benefits would give a better chance of success for the project. Meanwhile, Mr Pateman noted that stamp duty reform remains crucial for the industry, and the company with industry leaders would continue to lobby for the reform.

As of 25 May, the company had $1.3 billion of work pipeline, of which $960 million was approved. Also, the company would move to construction phase for several projects in 2020.

Adelaide Terrace Approval: In July, the company reported that approval was received for an Adelaide Terrace project, which has estimated the final project value of $92 million with 119 units. Construction is expected to commence in January 2021. Mr Pateman stated that June was the busiest sales month in the last two years.

Stamp duty support: Western Australia has extended the stamp duty rebate of 75% for off the plan apartments. The policy support now extends to include stock under construction, allowing industry to move towards construction from marketing.