Imugene has recently announced that it has received a third approval from the Human Research Ethics Committee (HREC) to kick-start a Phase 1 trial of PD1-Vaxx in Australia. The third ethics approval has been granted to the Cabrini Hospital, located in Melbourne, Australia.

PD1-Vaxx is a B-Cell activating immunotherapy of Imugene, which has been designed to treat, in the first instance, cancerous tumours in the lung. PD1-Vaxx induces the body to produce antibodies that bind, interact and deliver an anti-cancer effect identical to available and transformational treatments like billion-dollar blockbuster drugs, Keytruda® and Opdivo®.

Imugene is planning to undertake a multi-centre dose-escalation Phase 1 trial of PD1-Vaxx in non-small cell lung cancer patients, both as an individual therapy and alongside other immune checkpoint inhibitors such as Keytruda® and Opdivo®. 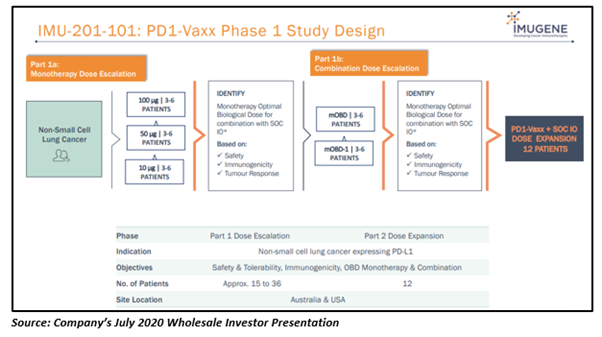 It is important to note that Australia carries a great burden of lung cancer disease, with ~12,800 Aussies diagnosed with lung cancer each year, as estimated by the Australian Lung Foundation.

Cabrini Hospital is the third hospital to attain ethics approval for PD1-Vaxx’s Phase 1 trial after Chris O’Brien Lifehouse and Macquarie University Hospital, based in Sydney Australia.

Imugene notified that additional clinical sites are also being profiled in Australia, as well as the US following the planned submission of investigational new drug (IND) application to the FDA (Food and Drug Administration).

The Company also informed that the site activation has been completed, and patient screening has now started at Macquarie University Hospital, which was the second hospital to receive human research ethics approval for PD1-Vaxx’s Phase 1 trial.

In its latest newsletter for July 2020, Imugene mentioned that Merck reported FY19 sales of USD 11.1 billion for Keytruda®, while Bristol Myers Squibb (BMS) announced sales of USD 7.2 billion for Opdivo®.

While both these drugs have been approved for public use by the FDA in recent years for many different types of cancer, including lung cancer, toxicity and immune-mediated side effects have been discovered. Besides, Imugene stressed that the success rates of these drugs are relatively low, with just a proportion of patients responding to the treatment as a monotherapy.

It is worth noting that the pre-clinical studies of Imugene’s PD-1 and Her-2 vaccines have demonstrated both efficacy and a response rate with minimal toxicity.

Imugene’s research suggests that PD1-Vaxx holds the potential to prevent lung cancer cells from averting T-Cell recognition and subsequent killing, which then provides the T-Cells with the ability to comprehend cancerous cells and produce an immune system response.

According to the company, this concept of tutoring and encouraging the body to produce its own antibodies targeting PD1 expressing cells epitomises a paradigm shift in oncology and is a unique treatment method for cancer.

Notably, Imugene’s ongoing efforts on PD1-Vaxx, hold two-fold potential, both as a standalone therapy and the possibility of tandem effect when combined with treatments like Keytruda® and Opdivo®, two of the most financially successful drugs on the market.

Do Not Miss! Flick Through Imugene’s June 2020 Quarter Milestones