On the back of robust exploration endeavours which currently appears to be bustling with vigour, Troy Resources Limited (ASX: TRY) is progressing on the advancing track concerning gold exploration. In a significant development, the Company has fostered a robust potential with the success-churning efforts that is being crafted around the diamond drilling campaign at its wholly-owned Karouni Gold Project in Guyana.

Adding another feather to its cap, Troy recently announced spectacular results for the exploration activities which involves eight-hole diamond drilling campaign at Smarts Underground targeting mineralisation beneath the Smarts Pits. The impressive results generated from the successfully completed first stage of the campaign typically align with the ongoing buzz around the bullion counters.

Notably, the volatility induced by Black swan event COVID-19 has nurtured a fertile landscape for the yellow metal as investors continue to hold an upbeat stance regarding the precious metal. High-grade gold discoveries amidst such time points at the cornucopia of excellence for Troy Resources exploration efforts.

ALSO READ: Gold- A Sprinter in the Marathon, Is the Price Rally Sustainable?

With this backdrop, let us, deep-dive, into the latest exploration endeavours being advanced by the Company.

An eight-hole diamond drilling campaign at Smarts commenced following Troy’s ASX announcement entitled “June Quarter Production and Exploration Update” on 13 July 2020. Notably, the Company previously beneath the Smarts Pits had delineated a Mineral Resource (all categories) of 3 million tonnes at 3.0 g/t Au at a 1 g/t Au cut-off for approximately 290,000 ounces.

The campaign is centred on further advancing the underground mining potential at Smarts.

It is pointed out that at a 3 g/t Au cut-off, around 190k ounces is still contained by the Mineral Resource. While scoping study was already required, the additional drilling and other inputs would be required prior to the release of a JORC-compliant scoping or pre-feasibility study.

Furthermore, the Smarts 3 Pit contains approximately 30k ounces of gold, which, to some extent, has problematic access due to pit wall stability issues. The development of the Smarts Underground would potentially offer access to the Ore Reserves, which lies above the aforementioned Mineral Resource.

Lens Through the First Stage of Drilling Campaign

Since the commencement of the campaign, assay results from five holes have been received, marking the completion of the first stage of the diamond drilling campaign. The results have been spectacular for holes SDD183 to SDD187, enhancing gold centric exploration prospects.

Multiple intersections present in some of the drill-holes, especially SDD183 and SDD185, suggest the presence of several high-grade mineralised zones.

Furthermore, the block model of Smarts Deeps at a 3 g/t Au cut-off showing recently completed diamond holes and the long section including results from the holes indicate:

The higher grades are confined to blocks of mafic rocks which lies within the Smarts-Hicks shear, amenable to brittle fracturing and gold formation bearing sulphide-rich quartz veins.

The initial diamond drilling targets are provided by the central zones, which also offer the potential for the presence of repetitions to the north-west of the Smarts Pit.

The Company considers the results very promising, and they confirm the significant potential for the presence of a high-grade mineable Ore Reserve at Smarts Deeps.

The Company building on the recent exploration has re-commenced investigation into the underground mining potential at Smarts. 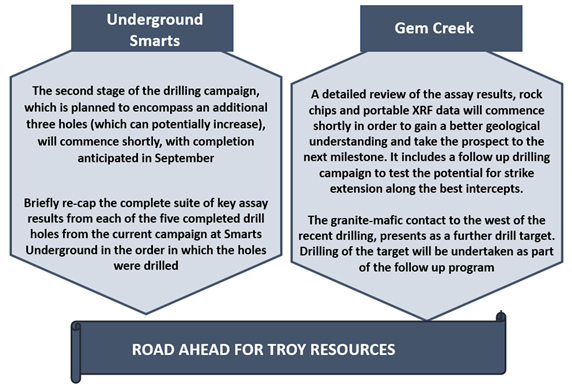