Kaiser Reef’s strong portfolio in LFB, Stocks up 80% since IPO

Kaiser Reef Limited (ASX:KAU), the Lachlan Fold Belt (LFB) focused Gold explorer, published a presentation with details pertaining to the company updates and foothold in the region, the flagship Stuart Town Project and the strong financial and cash position of the company for future advances.

Premium Mineral Projects in the neighbourhood of mega operations and discoveries

The Macquarie Arc lies on the northern extent of the Macquarie Arc and includes (ELA 5948 and ELA 5949) exploration license applications stretching across 80 square kilometers. 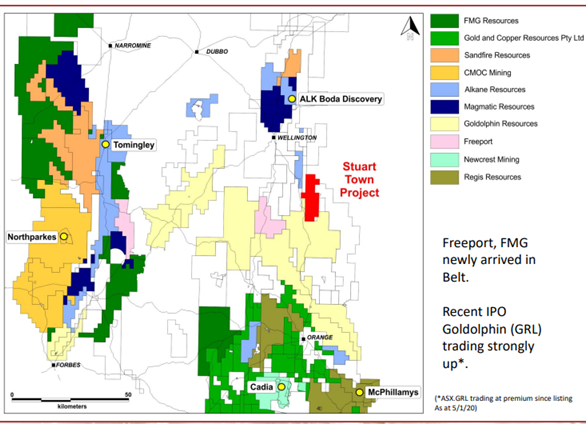 Ever since the discovery of the gold prospects in 1852 at Stuart Town, over 80 documented Gold operations existed making it one of the densest groups of historic gold mines in NSW. A recorded production (1875 onwards) of >170,000 ounces of gold – well after the peak if the fields production.

The historical gold mining operations had a working depth up to 228 meters and a with mineralisation of strike lengths over 600 meters. The characteristic mineralisation style includes brecciated rhyolite and porphyritic intrusive rocks which are considered prospection for bulk tonnage gold deposits.

The geophysical data modelling indicated a large-scale coincident gravity and magnetic anomalies located beneath the Specimen Hill Quartz Hill-Manna Hill historic gold workings. Processing of magnetic and gravity results generated an image with bulk gravity low anomaly coinciding with the magnetic inversion anomaly. The prospective exploration target with overlying gold mineralisation may be the origin of the intrusive system. 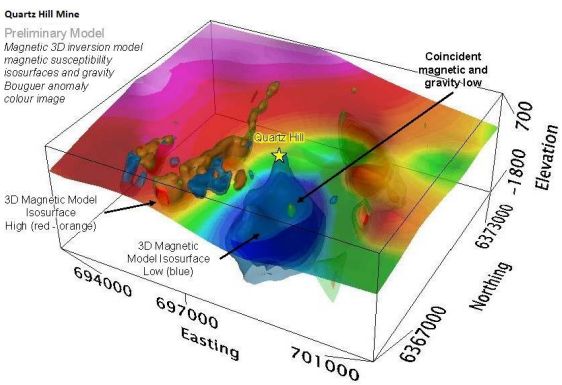 Prospective Targets - The prospective targets include the extensive high-grade soil anomalies. Several large-scale geophysical prospects have already been identified at shallow depth and are considered underexplored.

An intrusive system stretching across 1,200m x 1,700m has been identified within 200 meters of the surface. Large overlying historic gold workings form an area of interest ranging from high grade shear to the large-scale targets. The bulk targets are yet to be tested and have never been drilled by historical explorers including CRA (now Rio Tinto group) and MIM in the 1990s.

The Lachlan Fold Belt is considered among the hottest Gold and Copper mining regions of Australia.

The discovery of Alkane’s Boda prospect has further put the region into the limelight with the prospective exploration ground being sought by explorers ranging from juniors to the mining majors.

The rising interest by the mining firms in the LFB establishes the region as one of the lowest risk in Australian province.

Strong & Experienced Management – A strong and experienced board and management leads Kaiser Reef.

The directors, Mr Jonathan Downes and Mr Adrian Byass have led multiple ASX listed mining firms through 6 IPOs with strong early returns and several moving into production. The latest venture by the directors includes the Galena Mining (ASX:G1A) which is currently developing the Abra lead-silver mining project. Out of the 6 listings from the management, 4 have already commenced operations, 1 is under development and another one is at an early financing stage.

Read Here: To know more about the management and board

Kaiser Reef holds cash of ~$4.0M with no debt, well positioning the unique explorer for the advanced exploration program at the Stuart Town Gold project.

The lean IPO reflects in the tight capital structure, with over 33.5 million shares on the ASX. Kaiser Reef closed at $0.36 a share on 21 July 2020, registering an increase of ~7.46% against the previous close, with a market capitalization of $12.04 million.