Staying ahead of the curve, the Australian explorer, Horizon Minerals Limited (ASX: HRZ) continues to make a pitch for next milestones while its recent undertakings churned out impressive results. Significantly, the latest news on ASX indicating the commencement of the Company’s largest-ever drilling program has been garnering substantial attention.

The FY 2021 program will commence across a range of targets, all within 75 kilometres of Kalgoorlie-Boulder in Western Australia’s world-class Goldfields region. The drilling program will comprise of resource growth, reserve conversion as well as new discovery drilling through the 850 square kilometres of the Company’s wholly owned tenure. Notably, the program totals over 70,000 metres within over $7 million budget.

The recently planned exploration follows the completing of the first milling campaign, which produced a total 1,050 ounces of gold generating $2.93 million in revenue. Meanwhile, the Company also received bidding commitments from new and existing Australian and international institutional and sophisticated investors to raise $16.1 million before costs. Horizon indicated that it is now well funded and is assessing a more massive scale production profile along with pursuing exploration for growth and new discoveries.

With Horizon making headway for opening further prospects, let us explore what the upcoming exploration program holds for the Company

Horizon’s planned drilling program consists of infill, metallurgical, geotechnical, environmental and near mine extensional drilling to ensure the enablement of conversion of current Measured and Indicated Resources to Ore Reserves.

The Company will complete the drilling at the core Boorara, Teal, Rose Hill, Brilliant North and Binduli gold project for enabling the assessment of minimum 4 to 5 years initial production profile with Boorara offering 70% of the mill feed bolstered by satellite open cut and underground projects. 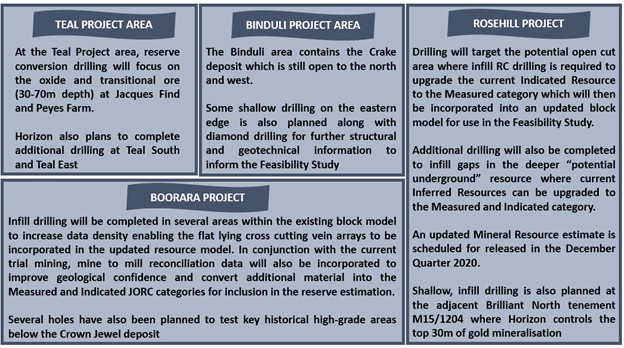 Horizon has planned a 15,000 metres program for growing resources at key advanced exploration projects which would support the Reserve Conversion program along with ensuring a robust projects pipeline to replace reserves over time.

The resource growth drilling will target strike and depth extensions beyond the current mineralised envelopes, test for repeat structures and new targets for near-mine resource growth

Notably, the strike and depth extensions beyond the current mineralised envelopes would be targeted during the resource growth drilling, with testing to be carried out for repeat structures and new targets for mine resource growth. 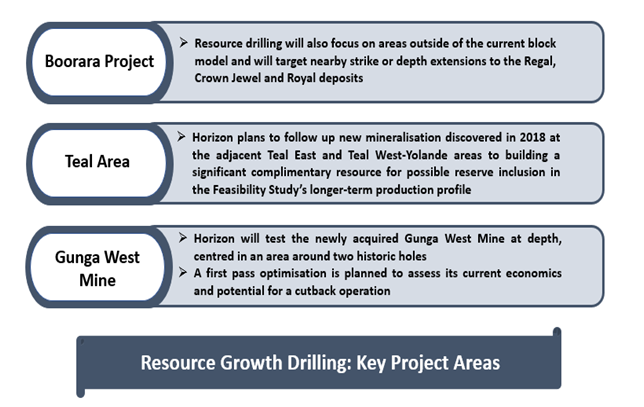 Deeper drilling during 2019 at the historic Capricorn prospect of the Windanya project area returned significantly promising results from 20 metres depth. Furthermore, the prospect has been drilled along 400 metres of a strike on a 40-metre grid pattern and has mineralisation open in all directions and require follow-up.

At the Silverstar prospect, over an area of ~100m length, complex mineralisation has been identified while impressive gold intervals were recorded at several drill holes, requiring follow-up drilling.

Horizon within major geological structures and prospective greenstone belt has consolidated a number of large, strategic landholdings in the Kalgoorlie-Coolgardie district. The priority project areas include Black Flag, Yarmany, Lakewood and the Kanowna South - Balagundi area north of Boorara.

Horizon indicated that the drilling would be completed systematically with up to three rigs cycling through the program and the results from each round would be collated, reviewed, and informing the next round of drilling.

(All currency is in AUD unless stated otherwise)