Staying ahead of the curve with its strategic actions, Horizon Minerals Limited (ASX: HRZ) appears to build a favourable ground for its exploration and milling programs. In a significant update, the yellow metal explorer has announced Capital Raising worth $16.1 million for catalysing the momentum of its already advancing exploration and mining activities.

The noteworthy undertaking strengthening the financial capabilities of the Company comes post the revenue-producing developments at its Boorara Gold Mine. Notably, Horizon in a recent announcement has indicated the generation of $2.93 million in revenue with the completion of the first Boorara Milling Campaign that produced 1,050 ounces of gold.

Commenting on the recent successful capital raising endeavours, Horizon Minerals’ Director Mr Jon Price indicated that the Company is “committed to growing sustainable mid-tier gold production business in the heart of the WA Goldfields”. He Stated numerous high quality Australian and international institutions showing strong support for Horizon Minerals besides the existing shareholders is a clear validation of the Company’s strategic focus.

As Horizon is setting the stage for advancing to the next phase of the exciting journey, let us dig into the key details of the capital raising and explore how the Company on the back of strategic measures and exploration success is fostering robust financial soundness.

Lens through the Placement

With the success of the recent Placement, Horizon Minerals appears all buckled up for advancing the exploration and production activities at Boorara. The Company has received binding commitments for the Placement of 115 million fully paid ordinary shares at $0.14 per share for raising $16.1 million before costs of the offer. The transaction shall take place in 2 Tranches.

New shares that will be issued under the Placement will rank equally with existing ordinary shares on issue.

With the heavy oversubscription of the Placement, the Board elected to increase the Placement size towards providing balance sheet flexibility, which would further assist in undertaking a large-scale drilling program along with pursuing further regional consolidation and providing general working capital.

Placement settlement shall happen in 2 Tranches

Notably, the Issue Price of $0.14 a share represents following discounts:

Hartleys Limited and Bell Potter Securities Limited acted as Joint Lead Managers to the issue and shall receive 6% as their fee while New York-based Jett Capital Advisors LLC was working as an advisor and US & Europe Placement Agent.

The capital raised would be utilised for accelerating exploration as well as long-term mine and mill development studies.

Apart from the recent capital raising, with the gold production totalling 1,050 ounces at Boorara’s first milling campaign, Horizon Minerals generated $2.93 million in revenue with an average sale price of $2,791 per ounce.

The Company completed its first milling campaign, which comprised ore from the Regal East trial pit. The cash-generating trial is a crucial step in the context of upgrading Horizon’s understanding of the extensive mineralised system at Boorara. Meanwhile, it would also aid in de-risking the more substantial scale development, which is currently being assessed as an element of the consolidated Feasibility Study.

A total of 26,340t of ore was processed from the first milling campaign at a fully reconciled feed grade of 1.32g/t Au and is line with expectations for the upper oxide ore zones near the surface.

Mill performance was beyond the expectations with excellent throughput rates, gravity recovery of 40% and a 93.8% overall calculated gold recovery.

Mr Price discussed the plans backed by the successful completion of recent capital raising indicating that fully funded Horizon would complete its largest-ever exploration program, geared towards resource growth, reserve conversion and testing new discovery targets with over 70,000 metres of drilling in the prolific gold producing region. Besides, the consolidated Feasibility Study would also be advanced by the Company and evaluating the longer-term production profile, including the establishment of a stand-alone processing plant at the Boorara mine site. 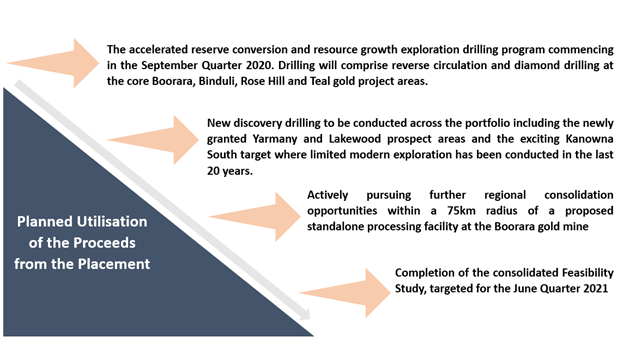 [Note: All currency is in AUD unless stated otherwise]