Redflow Limited (ASX: RFX) is a company engaged in the manufacturing, as well as the development of the zinc-bromide flow batteries, which is utilised to store stationary energy. 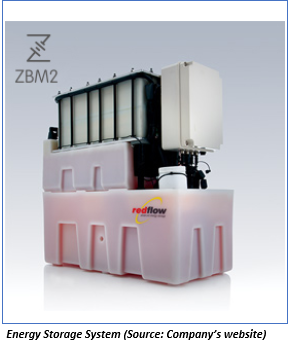 On 17 May 2019, Redflow Limited announced that it had entered into a collaboration agreement with ZbestPower Co., Ltd where RFX will be supplying a large scale (100kwh) Redflow battery energy storage solution for a demo project for a smart grid project in China. ZbestPower Co., Ltd is a Chinese zinc-bromine flow battery company.

The Redflow deployment forms a part of the Smart Grid Project of Haidong Transportation Group, which is situated in the Qinghai Province. The China National Energy Bureau will be supporting the Smart Grid Project. The project consists of sixty-six-kilowatt solar PV parking carport, 1MWH energy storage system, eighteen EV fast charging points along with smart energy management system. Through the energy storage system, the electric vehicles will be charged using renewable energy from the grid at the lowest price. At the same time, the energy storage system will help in analyzing various energy storage technologies. The entire project of Haidong Transportation Group is managed by ZbestPower.

As per the Collaboration agreement, both the parties have decided that they will be developing a large- scale battery storage solution for meeting the critical project milestones, which was set by Haidong Transportation Group. Under the agreement, both the parties have also agreed that during the demo period, they will be demonstrating the technical, as well as the economic feasibility of the Redflow system and at the same time will be working together on leveraging the Redflow system for commercial opportunities in China.

The company will be helping in site preparation followed by testing, setting up, commissioning, operation and ongoing monitoring along with reporting. It will also help in decommissioning as well as returning the Redflow system. The company would also provide technical support that will be provided through Chinese-speaking technicians of Redflow.

The CEO of ZbestPower, Luke Lu stated that the collaboration of ZbestPower with Redflow would help ZbestPower in understanding the potential of ZBM2 batteries in China since flow battery technology has been identified as a vital part of energy storage future of China.

Mr Harris, the CEO of Redflow, stated that that through this collaboration, both the parties would jointly be benefitted with the Smart Grid Project of the Haidong Transportation Group.