Amid one of the most challenging financial years for Australia, a few sectors managed to emerge as winners despite several headwinds in their path. One such sector is Consumer Staples that has had a limited impact from the pandemic compared to the others. Panic buying during the initial stage of lockdown saw the sector players witness a sudden surge in demand.

ASX 100 listed Company Coles Group Limited (ASX:COL), a constituent of the Consumer Staples sector, is an Australian retailer of products such as fresh food, groceries, household goods, liquor, fuel and financial services. The Company delivered a strong result in FY2020 which has brought the stock under the limelight.

In Q4 FY2020, COVID-19 had an impact on both the level and mix of supermarket sale. After soft and socially distanced Easter, the Company noted an increase in sales as a result of increased in-home consumption. Its hole cooking categories like as meat and poultry were benefitted which got balanced by the drop in impulse, food-to-go and prepared salads.

The liquor sales stayed elevated all over the Q4 as government restrictions on the opening of hotels, pubs, clubs, and licensed venue operators were in place for most of the quarter across most states. The trading at CBD and shopping centre store were adversely impacted. Online sales were strong, improving more than 70%. The liquor segment remained consistent with Supermarkets, and it incurred incremental COVID-19 related costs of nearly A$5 million which includes thank you payments to team members, of which ~A$2 million are non-recurring.

Coles’ Express segment, c-store sales were robust as a few customers finished their ‘top-up’ shops at Express sites instead of visiting a supermarket. Sales in ambient groups were solid as were tobacco sales with the business profiting from lower CBD footfall. With the ease in the government restrictions in the second half of Q4 FY2020, the Company witnessed an improvement in its core convenience and impulse categories like food-to-go and confectionery. 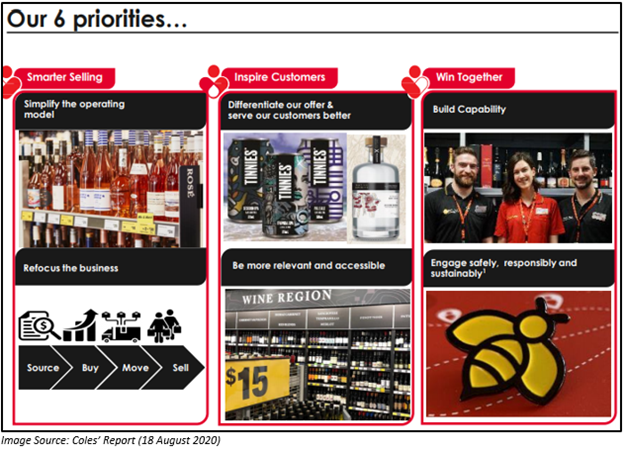 DO READ: How Has COVID-19 Impacted Brands? Are People Adopting Quality-Conscious Behaviour?

Coles is likely to incur a substantial rise in COVID-19 costs in the early part of FY2021. In Liquor, sales remain elevated with any balance of sales growth reliant on social distancing restrictions for clubs, hotels, pubs, and licensed venue operators. The average weekly fuel volumes in the early Q1 FY2021 are consistent with June exit rate.

Coles preserves its A$1 billion cost-out targets to be attained between FY2020 and FY2023. In FY2021, the Company would focus on realising cost-out opportunities. Gross operating capital expenses are anticipated to be ~A$1 billion.

Coles’ shares have gained market attention post the release of its FY2020. Although the Company delivered a robust performance in FY2020, continuous uncertainty has been seen in its share price. The Consumer Staples sector, which reached near its pre-COVID-19 level on 14 August, started moving in the downward direction from 17 August 2020. The movement was also reflective on Coles Group share price which went south despite favourable FY2020 results.