The steady stream of eventful undertakings at the Elizabeth Creek Copper project continues to give an extra edge to the growth potential of Torrens Mining Limited (ASX:TRN).

In line with the current exploration momentum, the Company’s joint-venture partner Coda Minerals Limited (ASX: COD) has kicked off drilling the daughter (wedge) holes at the Tier-1 Emmie Bluff Deeps IOCG Prospect, which is part of the Elizabeth Creek Project.

Notably, Torrens holds a 30% JV interest in the Elizabeth Creek Project, located in the heart of SA’s Olympic Copper Province. 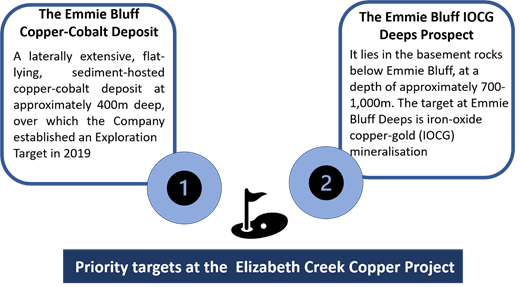 A 200-metre-thick zone of intense IOCG-style alteration, consisting of ~50 metres of moderate to intense copper sulphide mineralisation, was intersected in a deep diamond drillhole (DD21EB0018) at Emmie Bluff Deeps. Following the encouraging drilling intercept, work on the first of two wedge holes from DD21EB0018 has been kickstarted.

Daughter holes (Commencing at approximately 500m) will initially be drilled to the west and the east of the parent hole. They have been designed to produce separation of between 50m and 100m from the parent hole through the sulphide zone.

A substantial parent and daughter diamond drill holes programme is planned to rapidly and efficiently evaluate the potential for Tier-1 IOCG system.

An additional diamond drill rig will be mobilised to commence drilling from the surface at one of the six additional pads in the area, previously approved at Emmie Bluff Deeps.

Further drilling, consisting of potential daughter holes, is expected to continue for minimum next three months.

Core from DD21EB0018 has been dispatched to a dedicated facility in Adelaide for cutting, photographing and assay preparation. Assays are expected within 3-5 weeks.

Drilling is underway at the Emmie Bluff Zambian-Style prospect to complete the drill-out and resource estimation process. Two diamond rigs and one RC diamond rigs are present on-site, while a third diamond rig is expected to arrive on-site within two weeks.

On the basis of the recent results at Emmie Bluff Deeps, a small proportion of resources, including field staff and drill rigs, which had been earmarked for the Emmie Bluff programme, have been reassigned to IOCG exploration.

The Emmie Bluff Mineral Resource Estimate delivery is expected in the December Quarter of 2021, while the avenues for increasing available resources on-site would be considered.

The regional exploration programme at the Elizabeth Creek Copper Project consists of RC drilling at the Hannibal, MG14 North, and Powerline prospects. The drilling at all three prospects is projected to be completed in the first half of July 2021.