Notably, FYI aims to position itself as a significant player in the burgeoning HPA industry to tap the growing opportunity from the electric vehicle and high-tech product market segments. HPA is increasingly becoming the primary input material for various high-tech products due to its unique chemical properties and characteristics, which are very useful in LEDs and sapphire glass products.

Besides this backdrop, let us look at the key highlights for the reported period. 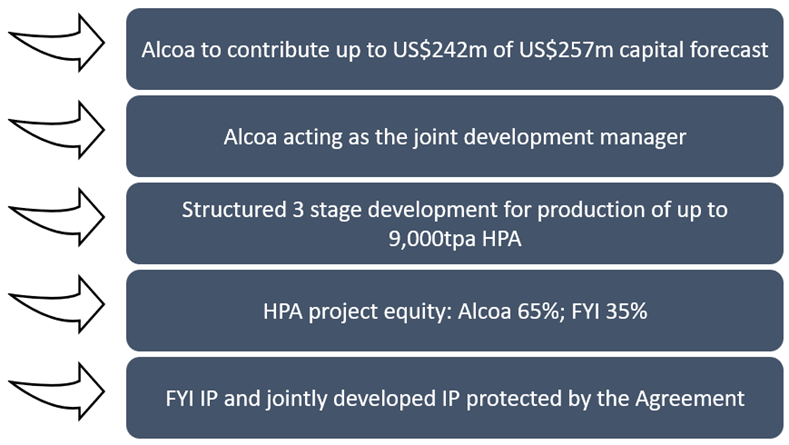 FYI along with its partner, Alcoa, has been jointly structuring the HPA product marketing strategy. The marketing strategy will leverage FYI’s existing relationships with potential customers and Alcoa's global marketing team with a global presence.

During the reported period, FYI along with its partner Alcoa, collaboratively conducted two extended pilot plant operations. Results of the two weeks of pilot operations demonstrated continued high-quality grades being achieved across the suite of samples, with purity ranging from 99.999% to 99.997% Al2O3.

In April 2021, FYI announced an update to the revised Definitive Feasibility Study for the HPA project, demonstrating a potential project value (NPV-post tax) of US$1.14 billion. The significant rise in potential project value reflects several changes to underlying assumptions based on technical improvements, project de-risking, and other key commercial developments achieved since the preliminary DFS in March 2020.

The outline of the updated DFS are as follows:

Appointment of Operations and Technology Manager

FYI has appointed Claudio Di Prinzio to the position of Manager – Operations and Technology during the period. The new professional brings more than 30 years of direct industry experience in project development management, commissioning and operations management across a range of project sizes, commodities and jurisdictions.

The resource player has inked a joint development program with ASX-listed graphite company, EcoGraf Limited (ASX:EGR), to develop an innovative, high-density and HPA-enhanced battery anode coating material, which is suitable for usage in the lithium-ion battery industry.

Qualified and Upgraded to the OTCQX

During the period, FYI qualified for upgradation from its current standing of OTCQB to the premium OTCQX market. The Company had initially received approval for trading on the US-based OTC market from the Securities and Exchange Commission (SEC) in May 2021. Furthermore, the alumina producer commenced trading upon approval on the OTCQX on 29 October 2021 under the ticker, “FYIRF”.

FYI adopted a globally recognised ESG rating framework during the half-year period under which, the Company has established a baseline standard, and intends to improve on these ESG standards.

Sustainalytics, a pioneer in providing best-in-class analysis, has provided FYI with a revised ESG score of 23.8 and a ranking of 5th out of 153 peers. Additionally, FYI was among the top rankers in 3 categories and among the top 5 rankers in additional 5 categories.

Adding to this, FYI has also established an independent ESG reporting platform to centralise the Company’s ESG data during the period.