The clinical-stage stem cell and regenerative medicine firm, Cynata, focusses on the development of therapies based on its unique Cymerus™ technology. The Company’s Cymerus™ technology is addressing a critical limitation in existing MSCs (mesenchymal stem cells) production methods for therapeutic use. The shortcoming in existing production methods is the ability to achieve economic manufacture of cell therapy products, including MSCs, at commercial scale without the need for multiple donors.

Cynata has been making fast-paced progress towards enriching its proprietary Cymerus™ mesenchymal stem cell technology. This unique technology makes use of induced pluripotent stem cells (iPSCs) and a precursor cell known as mesenchymoangioblast (MCA) for the commercial-scale production of MSCs from a single donor. With this approach, the Company overcomes multiple issues with today’s on-market solutions. 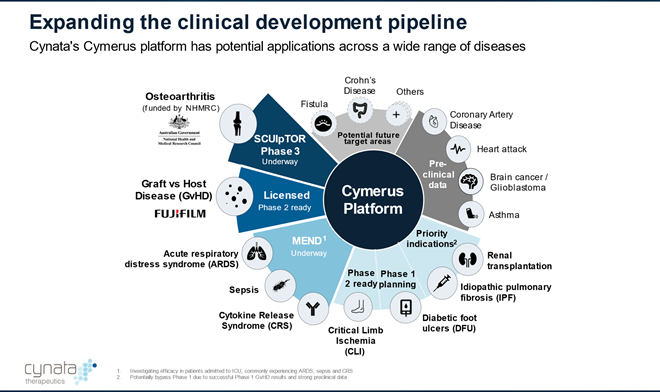 Cynata informed that the patent office has issued a notice stating its intent to grant two new patents on applications covering its exclusive Cymerus™ MSC technology. The matters are entitled as “Colony Forming Medium and Use Thereof” and “Pluripotent Stem Cell Assay”. Both the patents are wholly owned by Cynata.

The two Russian patents will play a significant role in building on the broad IP (Intellectual Property) protection of the company’s unique manufacturing platform. Moreover, the patents will protect its ability to produce highly consistent MSCs at commercial scale to create therapeutic stem cell products, without the need for multiple donors.

Notice of allowance for a patent in the US and Canada

Of late, the ASX-listed firm secured approval from the Canadian Intellectual Property Office (CIPO) for its patent application covering the Cymerus™ technology. The receipt of approval underlines the Company’s progress towards building a substantial IP asset base in markets of major commercial importance.

The patent application is entitled as “Methods and materials for hematoendothelial differentiation of human pluripotent stem cells under defined conditions.” Owned by the Wisconsin Alumni Research Foundation (WARF), the patent is one of the intellectual properties licensed exclusively from WARF to Cynata. WARF is an independent non-profit technology transfer group that serves the University of Wisconsin–Madison.

Cynata Therapeutics is leading the healthcare segment as a regenerative medicine and stem cell therapeutics company. In the recent past, Cynata has been actively adding layers to its extensive patent portfolio to strengthen Cymerus™. The biotech firm is determined to enhance the valuable traits of its unique technology against a variety of catastrophic diseases across the globe.