Alchemy Resources Limited (ASX:ALY) is riding high on its latest update on the identification of a cluster of pegmatites at the Karonie gold project in Western Australia. Further fieldworks on its flagship project have returned additional outcropping pegmatites over the recently discovered lithium in soil anomalies.

The mapping program by the Company has delineated the pegmatite cluster over an initial 7km x 1.5km area and doubled the strike length at two of the lithium prospects on the project.

As lithium explorers have become the darling of the investing world nowadays, the bourse cheered the upbeat update. ALY shares jumped 7.4% to AU$0.029 during the early hours of trade on 27 May 2022.

After the discovery of lithium and pathfinder anomalism at the project, Alchemy led a reconnaissance field mapping operation over the Cherry, Hickory, Mesquite and Pecan prospects on the Karonie tenement.

The mapping program further extended the known pegmatite occurrences at the project. The team delineated several pegmatite dyke clusters, which indicate the presence of multiple zones outcropping within the target area. 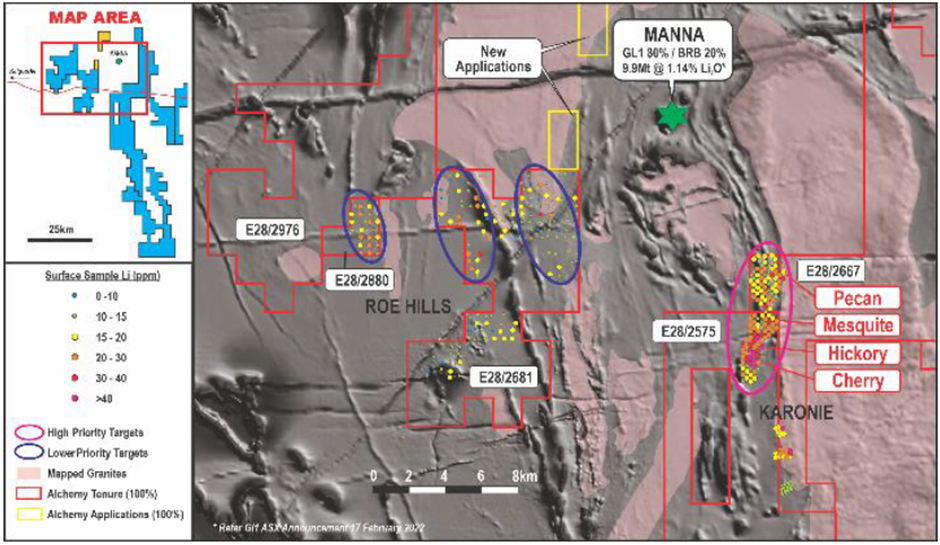 Also read: Why shares of Alchemy Resources (ASX:ALY) have more than doubled so far in 2022?

Alchemy feels that understanding the structural and geochemical controls on the identified outcrop bodies will be crucial in determining the areas for drill testing.

Alchemy’s team identified additional outcropping pegmatites at Cherry and Hickory during the ground truthing for the lithium anomalies. A total of six outcrops were mapped, with a cumulative strike length of >1.4km.

The plotted pegmatites lie close to the soil anomalies, which is significant. A thin soil cover is present on the portions of the Cherry and Hickory anomalies. 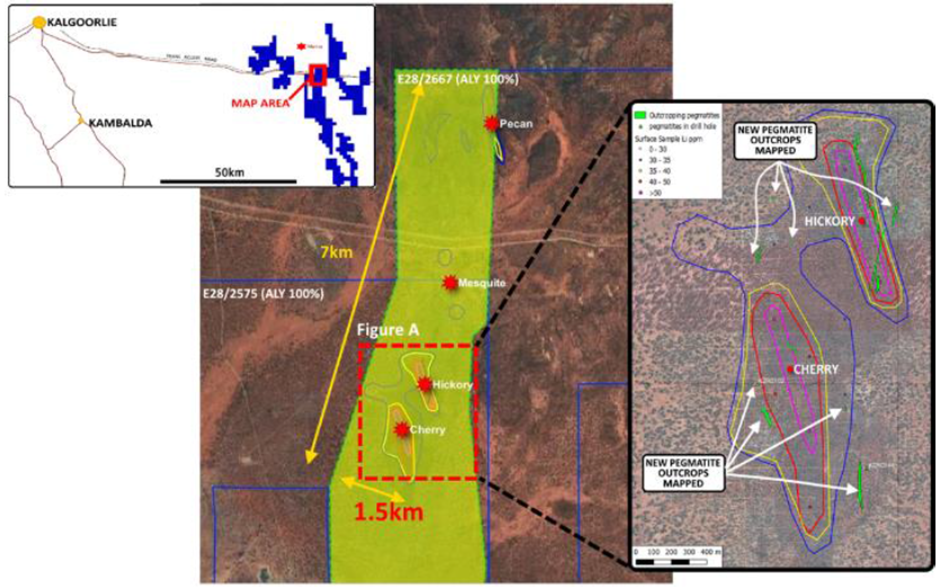 New mapping results on Cherry and Hickory (Image source: ALY update of 27 May 2022)

At Pecan, two zones of outcropping pegmatites were observed during the ground truthing of the anomalies. The outcrops correspond to the soil anomalies in the area with a surface strike extend of nearly 200m in each area.