Commodities had witnessed a lot of turbulence in the recent past with consumption-based commodities except iron ore plunging considerably across the global front, while safe haven commodities such as gold rallying consistently since the outbreak of COVID-19.

However, while the equity market or S&P/ASX 200 Index has plunged considerably to deliver a negative YTD return, some of the metals and mining stocks have delivered impeccable performance, despite an overall slowdown in the global economy and day-to-day challenges imposed by the lockdown. 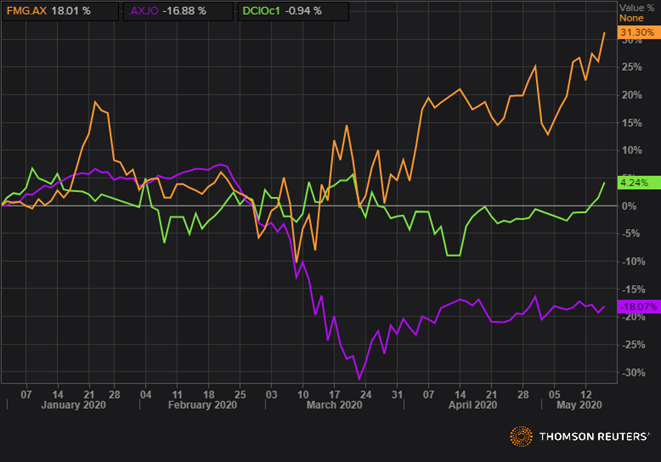 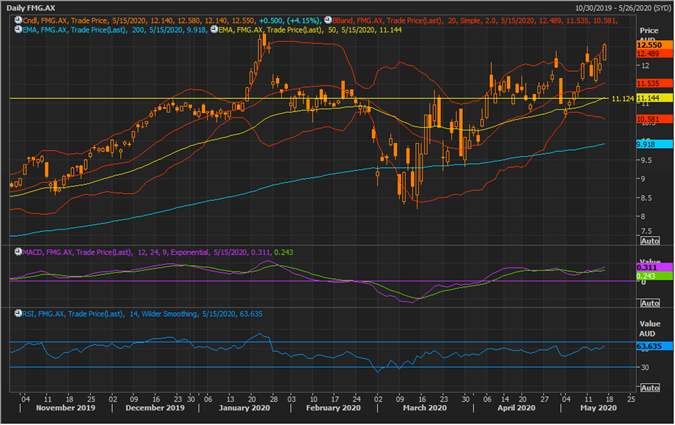 On the daily chart, it could be seen that the stock recently crossed its long-term resistance line at $11.144 per cent and gained momentum on ASX. During its upside rally, the stock breached the +1 Standard Deviation (or SD) of the 20-day Bollinger band around 6 April 2020; however, took a correction right after to retest the mean value of the band (or 20-day simple moving average).

In the status quo, the 12,26,9 MACD indicator is giving a positive signal, while the stock is testing the +1 SD of the Bollinger, which coupled with an above-mean 14-day RSI suggests that the momentum gained might cause the Bollinger to expand +-1 SD points ahead.

It should also be noticed that the long-term support line of $11.124 is overlapping with the 50-day EMA, reflecting that the support level is a decisive one, and if the stock sustains and closes above the same level with decent volume, it could attract bulls ahead or failure to do so would attract bears attention. 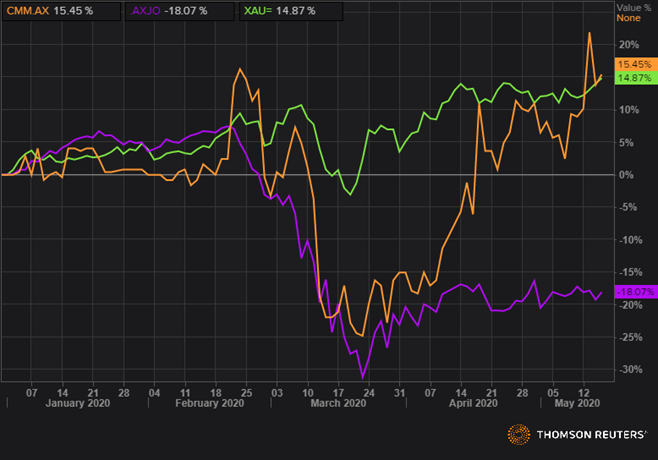 On a YTD basis, the stock delivered a return of 15.45 per cent to outperform the overall equity market by 33.52 per cent. Not just the overall market (captured by AXJO), the stock also outperformed the underlying asset, i.e., the return from the main source of revenue (gold), by 0.58 per cent. 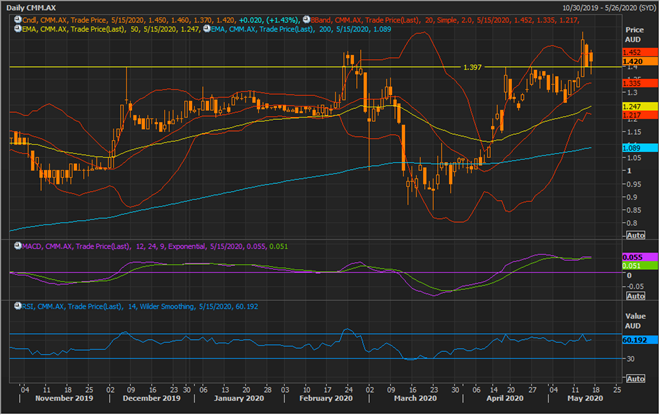 On the daily chart, it could be seen that the stock is now resting its support line after breaching the +1 SD of the 20-day Bollinger; however, it is presently trading above both the 50- and 200-day EMAs, which would act as support for the stock over the short-run. The MACD and RSI are both giving a positive signal, which coupled with the observation that the 20-day SMA is above 50-day EMA, reflects that the market sentiment around the stock is bullish. 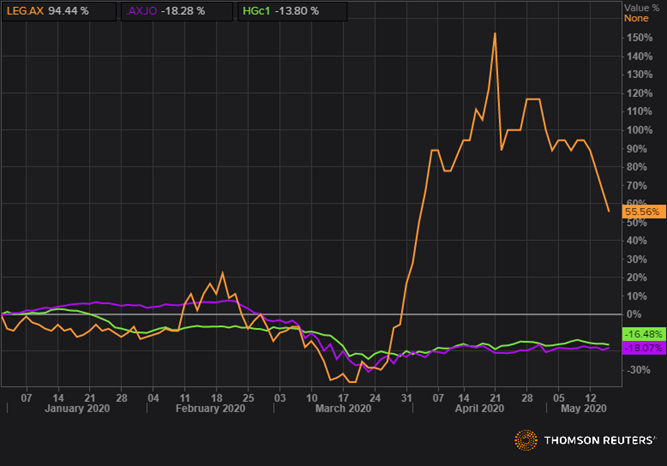 LEG delivered a massive return of 55.56 per cent on a YTD basis, despite weak nickel and copper market, in which the Company mainly deals. The stock outperformed the AXJO by 73.63 per cent and the underlying asset (copper) by 72.04 per cent. 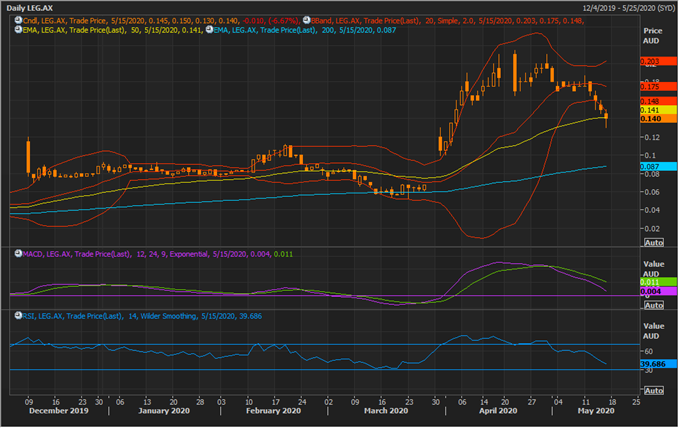 On the daily chart, it could be seen that the stock is now retracing from the mean value of 20-SMA and has breached the -1 SD of the Bollinger band, while taking a support around the 50-day EMA level. The MACD indicator is yet giving a negative signal coupled with a below-mean 14-day RSI value, reflects that at present bearish sentiment strongly prevails around the stock.

Over the near-term the 50-day and 200-day EMA would act as crucial support and should be monitored to gauge the price movement ahead. 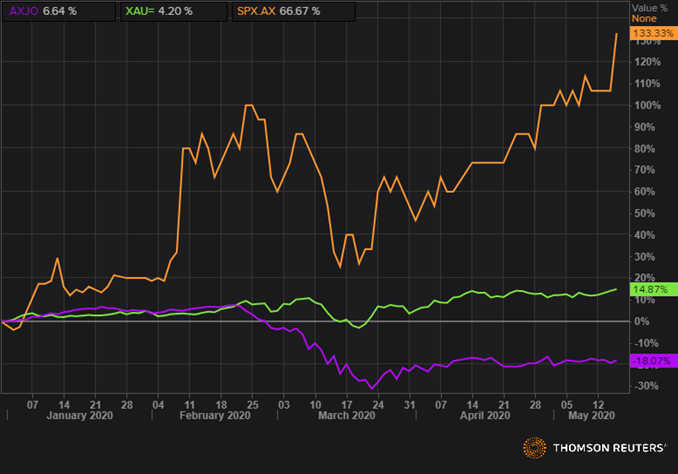 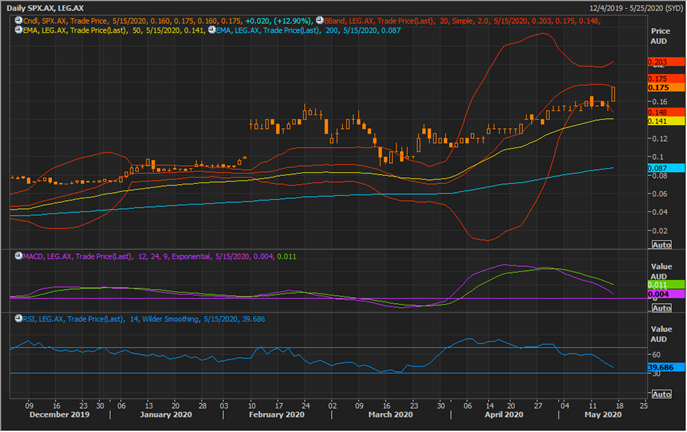 On the daily chart, it could be seen that the stock is now testing the mean value of the 20-day Bollinger band, which is above the 50-day EMA. The MACD indicator coupled with a below-mean RSI is giving a negative signal and reflecting a bearish setup for the stock.

The 50- and 200-day EMA should now act as the primary and secondary support for the stock. 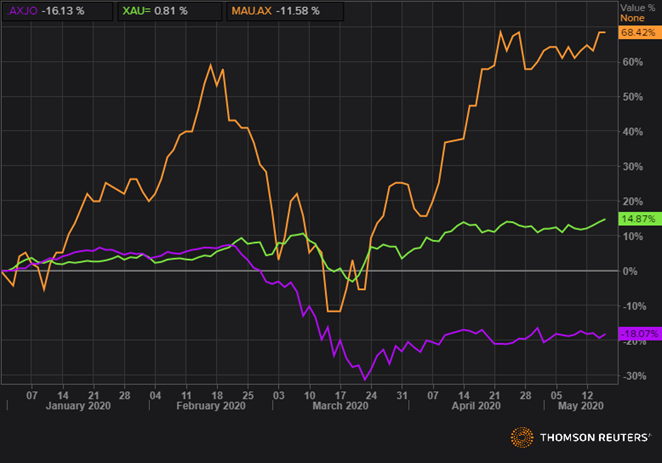 MAU has delivered a return of 68.42 per cent on a YTD basis while outperforming both the equity index and the underlying asset (gold). 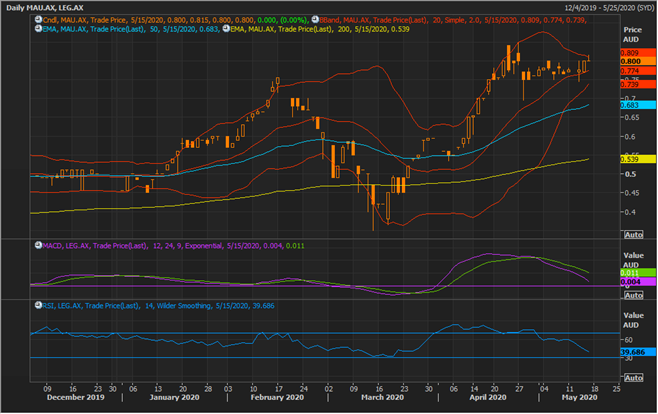 On following the daily chart, it could be seen that the 20-day Bollinger band is squeezing while the stock is retracing from its +1 SD, which could with a below-mean RSI and a negative crossover from the MACD indicator, reflects that the stock might take a correction ahead. There is a bearish divergence in the stock price movement and the RSI. The RSI failed to mark a new high while the stock is testing its previous months high price.