As per the assessment of the Department of Industry, Innovation and Science (or DIIS), prices of lithium hydroxide (delivered to China) stood 18 per cent lower in March 2020 quarter against the previous quarter (USD 9,410 a tonne) to stand at USD 7,750 a tonne.

However, despite the current fall in the consumption-based commodities, many industry experts, businesses, are still optimistic over lithium in the long-run, with DIIS estimating the lithium hydroxide price (delivered to China) to reach as high as USD 10,400 per tonne by 2025 amidst higher electric vehicle uptake, and projections over a possible bottleneck in the lithium supply chain from 2023.

The department also anticipates that the Australian supply, which stood at 244,000 tonnes (lithium carbonate equivalent) would fall in 2020 due to a sharp pullback in the production over falling lithium prices before surging to 393,000 tonnes in 2024-25.

Likewise, spodumene prices plunged by 4.6 per cent on a quarterly basis in March 2020 quarter and fell by 24 per cent in 2019 based on a price average of USD 515 a tonne.

In the recent past, China decided to increase its electric vehicle target to 25 per cent of all new vehicle sales by 2025. Tesla, a pioneer in EVs, began production for the Tesla 3 model at its Shanghai factory during the end of the year 2019 and witnessed a good order book. The EV giant, albeit halted the production at the unit post the COVID-19 outbreak in mid-February 2020, the factory at Shanghai is scheduled to produce 100,000 vehicles per year by the end of the year, and many industry experts estimate that the factory could now achieve 150,000 vehicles per year.

To Know More, Do Read: Tesla and Others are Back For Cobalt; Australian Mines’ Sconi Project To Lead the Australian Front?

Likewise, another Auto giant- Volkswagen has commenced pre-production at its Anting factory near Shanghai, and the full production is planned for October 2020, and the Company has a planned capacity of 600,000 vehicles per year, split between two factories in China.

In the recent past, the United Kingdom fast-tracked its banning of internal combustion engines from 2040 to 2035, excluding hybrid vehicles. 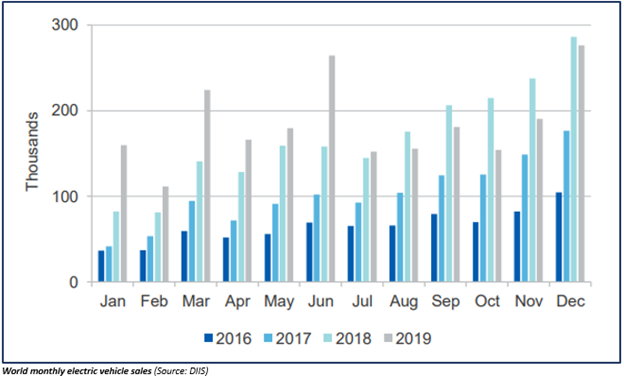 While the EV outlook is the very basic foundation of any lithium price-related projections, the DIIS anticipates that EV sales expand significantly over the longer term. 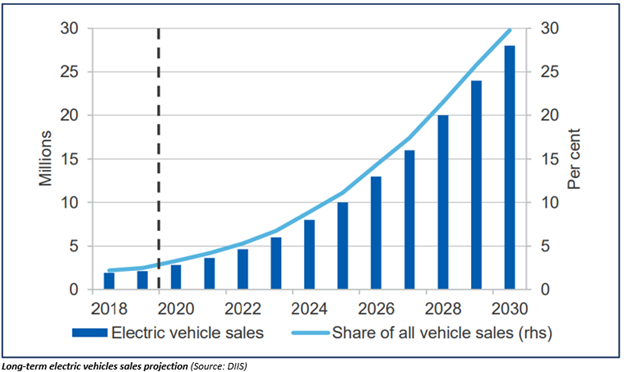 The global production in 2019 stood at 495,000 tonnes of lithium carbonate equivalent, exceeding consumption considerably, which in turn, exerted pressure on prices, leading to a production pullback across the continent and the globe.

To Know More, Do Read: Spodumene Pullback- How are the Key Australian Players Positioned?

The DIIS projects the global production to surge ahead to stand at 858,000 tonnes of lithium carbonate equivalent by 2025; however, suggests that in the wake of current oversupply, and due to the rapid acceleration in the scale of vehicle manufacturing across the globe, producers are likely to pay close attention to offtake agreements, vertical integration opportunities and strategic considerations before embarking on expansion.

The DIIS anticipates that the domestic production would gain a swing over the long-run or till 2025 after showing a loose momentum over the short-run or say till 2021 in the wake of falling lithium prices.

The snippet of the forecast by the DIIS is as below: