In a notable development, Pacifico Minerals Limited (ASX: PMY) has advanced well concerning its Optimised Pre-Feasibility Study (PFS) on its Sorby Hills Joint Venture Project. The Optimised PFS is expected to enhance the Process Plant throughput by a massive 50% from 1.0Mtpa to 1.5Mtpa, allowing the project life of at least eight years.

Following the significant resource update, the Australian Battery Commodity explorer is undertaking the Optimised PFS that is directed at increasing the mining rate as well as processing capacity, which would further de-risk the project with additional testwork.

The company is accessing two options within the Optimised PFS study, which is viewed towards increasing the Process Plant throughput by 50%.

Whole Ore option- The mined ore are directly treated by flotation at 1.5Mtpa

DMS option- Dense Media Separation (‘DMS’) is used to beneficiate low-grade ore, and the upgraded product is blended with high-grade ore for feeding the flotation plant at 1.5Mtpa

Comminution: PMY has performed Comminution tests on four composite samples, including crushing and grinding. It would add to the current data base for process design calculations in the Optimised PFS.

PMY also obtained good grades from the higher-grade samples. However, it also increases the reject grade, which at this stage is considered too high. The company would further explore the opportunity to incorporate high grade in the DMS process, along with additional testwork in the Definitive Feasibility Study.

Final full-scale DMS performance (corrected for fines content and DMS cyclone efficiency) estimated the mass recovery of 30% with 81% Pb and 73% Ag recoveries, offering the upgrade ratios of 2.7 for Pb and 2.4 for Ag.

Flotation: The new flotation testwork was conducted on four composite samples. Better sample representation was shown by the current recovery estimates, which have improved Pb recovery higher than compensates for the small reduction in Ag recovery. Project’s NPV will be positively affected by the latest testwork, as per the company.

Optimised PFS pit optimisation is utilising the October 2019 MRE. In addition to the ongoing refinements to the geological model on MRE, Pacifico has also completed a high-level review of Phase III drilling data’s perceived impact.

The key highlights include:

CSA Global is commissioned by PMY to complete a further MRE update, which is anticipated to be finalised during May 2020.

For the Optimised PFS, Pacifico has adopted a conservative approach with its pit optimisations and has excluded alpha and beta deposits which lies outside the EPA approved open pit development zone.

A regional numerical groundwater model is currently being developed. 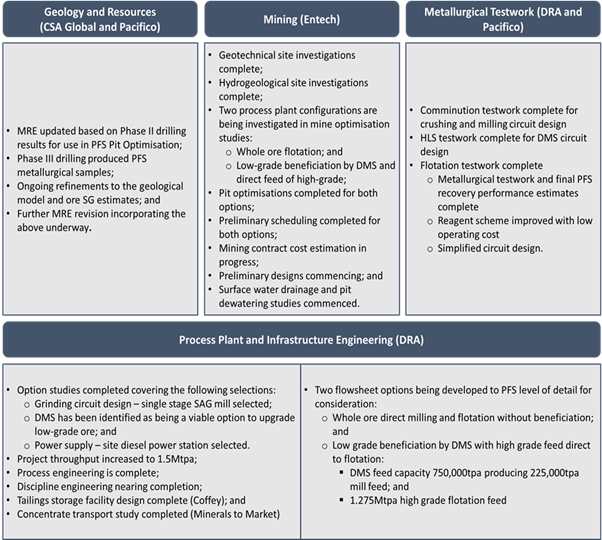