Australia has an excellent medical research, and health care infrastructure, as a result the Australian health care system has been the global benchmark for decades. In Australia, the health care industry is backed by the national and state government bodies together with some private healthcare players paving the way for continued expansion and contributing towards a healthier Australia. Investments in health care stocks require vigilance over their trading profile and significant clinical developments. While eyeing for stocks, for pouring money in the ones that seem to be trading at low levels can give an enormous benefit in future, however, this depends on several variables and not all such stocks can be a great bet in delivering a huge return as otherwise expected. On 25 October 2019, the benchmark index S&P/ASX 200 settled the day’s trade at 6,739.2, up 0.7% or 45.6 points from its previous close, while S&P/ASX 200 Health Care (Sector) last traded upward by 1.81% to 38.398.5 points. Below discussed are the two healthcare stocks, listed on the Australian Stock Exchange; ImpediMed Limited (ASX: IPD) and Medical Developments International Limited (ASX: MVP), that have seen a rise in their share prices post important developments related to their product candidates. Let’s take a peek into each of these health care stocks in detail. ImpediMed Limited (ASX: IPD) Brisbane headquartered, ImpediMed Limited (ASX: IPD) is a world leading company engaged in designing and manufacturing innovative medical devices that uses bioimpedance spectroscopy (BIS) for non-invasive clinical measurement, monitoring and management of tissue composition and fluid status. ImpediMed products comprise of FDA cleared and CE Marked medical devices portfolio, including SOZO®, sold in select markets globally, and is used for multiple indications including, heart failure and lymphoedema. IPD’s New Lymphoedema Prevention Program to End Cancer-Related Lymphoedema 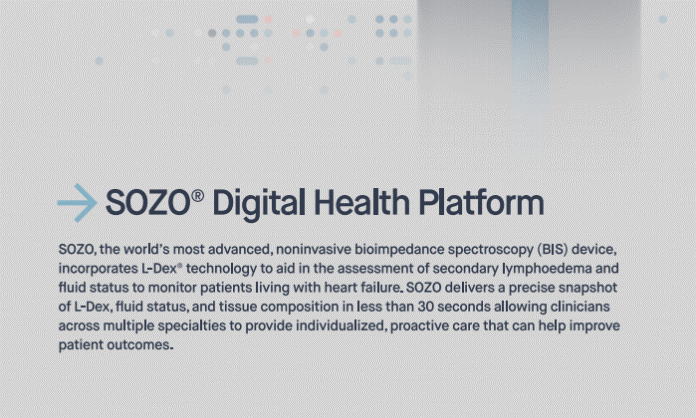 Source: Company’s Annual report for FY19 ended 30 June At present, it is estimated that 1 in 3 cancer survivor patients, those who are at-risk will develop secondary lymphoedema associated with their cancer treatment that would cost approximately $7 billion every year to the U.S. healthcare system. Main Objective of Lymphoedema Prevention Program is to bring to the knowledge of healthcare providers and patients that lymphoedema can be detected and managed way earlier than becoming a debilitating chronic condition if the proper protocols are in place. The company had also launched a website www.preventlymphoedema.com, which is focused on education and prevention. ImpediMed’s Financial highlights for the year ended 30 June 2019 In August, ImpediMed released its annual report for the financial year ended 30 June 2019. A few highlights from the same are as follows: Guidance for FY2020 Milestones Achieved During FY19 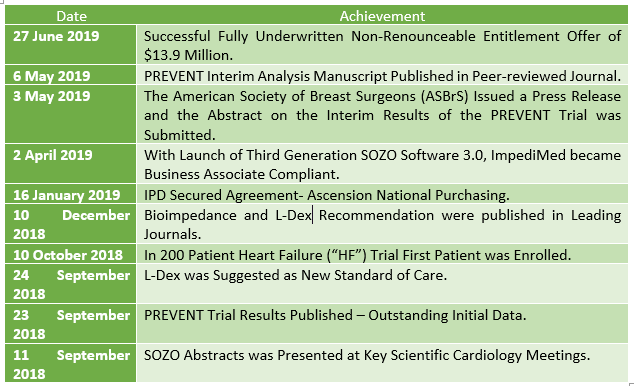 Stock Information As on 25 October 2019, the shares of IPD last traded at $0.165, down by 5.714% from its previous close, at a market capitalisation of $88.77 million and 507.26 million outstanding shares. IPD’s stock generated a negative YTD return of 9.27%. Medical Developments International Limited (ASX: MVP) An Australian company that provides emergency medical solutions, focused on improving patient outcomes, Medical Developments International Limited (ASX: MVP) is a global leader in emergency pain relief and respiratory products. MVP had manufactured, patented, fast-acting trauma and emergency pain relief product named Penthrox®. The company is also in expanding phase, taking steps towards the international market while manufacturing different world leading Asthma respiratory devices. MVP’s Penthrox® included in European Society of Emergency Medicine Guidelines Recently, on 24 October 2019, MVP updated on ASX that Penthrox® has been incorporated in new European Society of Emergency Medicine (EUSEM) guidelines for the “Management of acute pain in emergency situations”. It is a key achievement for Penthrox® as it is now recommended and approved as “first-line of treatment” option in both moderate and severe pain. The guidelines were funded by Mundipharma International Limited as an educational grant. Under these guidelines, clinical study data from InMEDIATE and MEDITA studies is included that provides clinical evidence underpinning the use of Penthrox (methoxyflurane).

MVP Launched Penthrox® in Italy MVP provided an update to the market that MVP’s Penthrox® has been launched in Italy, as announced on 23 October 2019. MVP’s CEO Mr. John Sharman stated that in preparation of this launch numerous clinical studies were completed by the company. Precisely, a 272 trauma patients’ study was conducted in Italian emergency units (MEDITA) demonstrating ‘superiority’ of Penthorax over Standard-of-care, including Opioids, for adult trauma pain patients in Italy. He further revealed that the launch would generate US$2 million, another milestone payment from MVP’s partner firm Mundipharma, expected during FY20. The company believes that Penthrox is positioned well to develop into a leading trauma pain medication in Italy as well as throughout Europe.” Multiple Positive Results Indicating Penthrox® is Superior to Standard of Care for Acute Trauma Pain Treatments that includes: 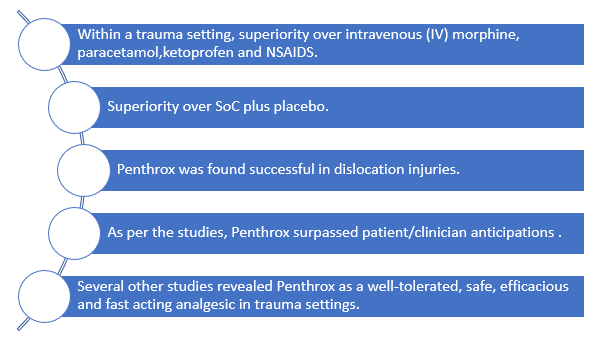