On 31 May 2019, Yancoal Australia released its 2019 Annual General Meeting (AGM) CEO Presentation. Mr Reinhold Schmidt is currently leading as the Chief Executive Officer of the company. Also, in 2018, Yancoal got listed on the Stock Exchange of Hong Kong Ltd.

The highlights of the presentation for the year 2018 included: 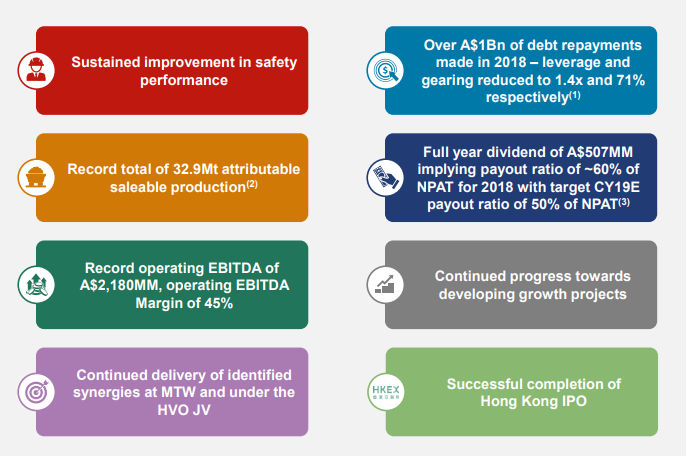 The company continued to develop and implement Core Hazard Critical Controls throughout the year with a commitment to operating mines to the highest safety standards. The Yancoal Total Recordable Injury Frequency Rate stood at ~ 7.7% as of December 2018, reducing significantly from ~ 12.5% since the completion of Coal & Allied acquisition in September 2017. 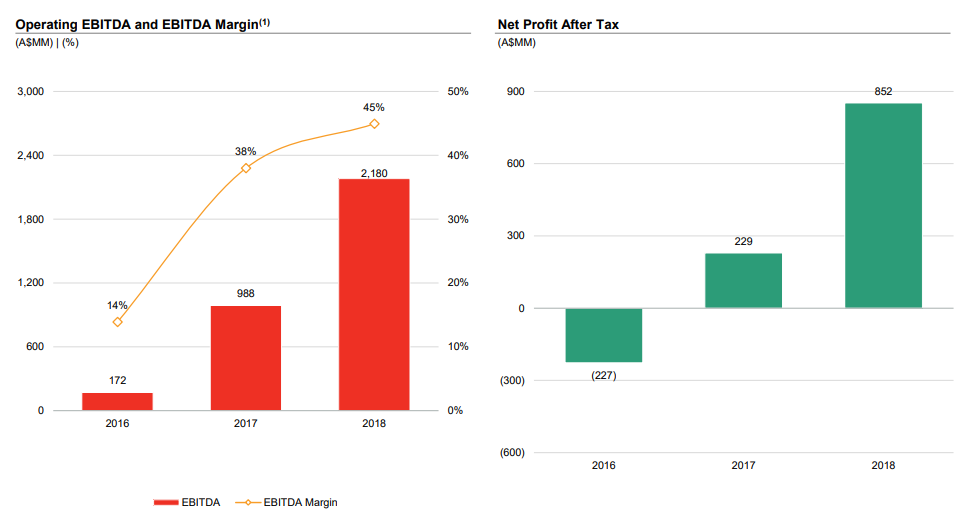 There was a significant expansion of operations with the completion of Coal & Allied acquisition and record production from Moolarben. The total gross saleable coal production for 2018 amounted to a record 50Mt, up 59% on the prior year on the back of 84% contribution from Yancoal’s three tier-one assets, Hunter Valley Operations (HVO), Mount Thorley Warkworth (MTW) and Moolarben which produced 41.9Mt in total.

The record annual production for Moolarben stood at 16.5Mt with maximised extraction rates at OC4/OC2 pits, and the Moolarben longwall (commissioned in November 2017) continues to deliver high productivity rates. 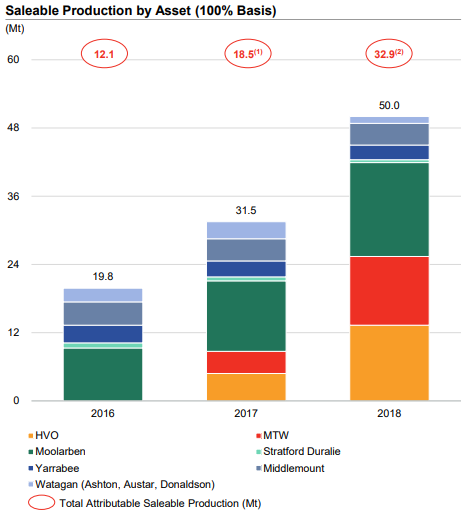 At MTW, Yancoal’ recorded fleet efficiency gains in 2018 and the receipt of approvals enabled the expansion of West Pit. Besides, HVO maintained high rates of extraction and haulage, while the ongoing maintenance reviews are expected to drive further production gains. The company anticipates ~ 35Mt of saleable production on an attributable basis in 2019.

According to the CEO, the robust financial performance has enabled the company to distribute dividends and undertake early debt repayments. The combined dividends for 2018 were A$ 507 million, or A$ 0.39 per share. In addition to this, the debt of US$ 1,400 million has been repaid during the past 20 months. Also, in 2018, the Yancoal Community Support Program invested more than $ 800,000 into the local community initiatives across Australia such as QUT’s Cancer and Ageing Research Program, Westpac Rescue Helicopter, Science, Technology, Engineering and Mathematics (STEM) and others.

Going forth, the company’s 2019 guidance for saleable production is around 35 million tonnes (attributable share), with stable production costs of A$ 63.5 per tonne (FOB basis and excluding royalties) and a capital expenditure of approximately $ 285 million (equity share).