Macquarie Group has reported its results for the year ended 31 March 2020. The financial services company has declared a $1.8 per share dividend (40% franked) payable on 3 July 2020 to the shareholders in records on 19 May 2020.

2H20 dividend is not sourced from the banking income of the group. In FY20, the group has recorded a net profit of $2,731 million, down by 8% from the previous year. Earning of the reported year were impacted by the impairments to account for the potential losses due to COVID-19. 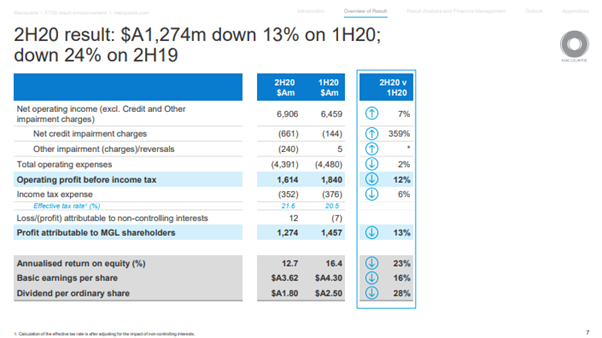 At $1,274 million, its 2H20 profit was lower by 13% compared to 1H20, and the profit decreased by 24% over the previous corresponding period. As the second half was coming to an end, the economic consequences of COVID-19 weighed on the performance of the group.

A substantial increase in credit and impairments expenses reflects the deteriorating condition of the economy and the outlook as a result of COVID-19 pandemic. Around 63% of the group performance or $3,439 million, up by 13% over the previous year, was generated from Asset Management, Banking Financial Services and some parts of Commodity and Global Markets.

Earning contribution from Macquarie Capital and most parts of Commodity and Global Markets was down by 35% compared to the previous year at $2,009 million. The international income constituted 67% of the total income. Ex credit and other impairment charges, the net operating income of the group was $13,365 million for the reported period while operating expenses of the group were $8,871 million.

Despite unfavourable market movements, lower contractual insurance assets and managed funds divestments, the assets managed by Macquarie Asset Management were up by 10% to $606.9 billion by the end of the year as against $551.3 billion in the previous year, primarily due to an acquisition, FX movements and investments by managed funds.

Interestingly, the group’s financial health continues to exceed the Basel III minimum requirements of APRA, having a record group capital in excess of $7.1 billion at the end of the reported period as against $6.1 billion in the previous year.

During the year, the group strengthened its capital position with a $1.7 billion equity capital raising, accessed new term funding worth $26 billion and increased customer deposits to $67.1 billion as of 31 March 2020 compared to $56 billion at the end of the previous year.

The group is also managing the disruption caused by COVID-19 pandemic. In response, it has floated a range of measures to support stakeholders. In banking, the small business and personal banking clients are provided with loan deferrals for up to six months. It has been actively supporting corporate clients with fundraising and advisory services, particularly in navigating a way out of the pandemic.

Almost all of the group staff (98%) is working remotely. Also, the group has contributed $20 million to the organisations that are engaged in fighting the pandemic through its foundation.

Asset Management business of the group delivered a net profit contribution of $2,177 million for the year, up by 16% from $1,872 million in the previous corresponding period. It recorded higher base fees, performance fees, investment income and other fees. However, these gains were offset operating expenses, lower lease income and credit and other impairment charges.

Banking and Financial Services had a net profit contribution of $770 million for the period, slightly up by 2% on the previous year. Despite higher credit provision and margin pressure, the segment performed well in deposits, loan portfolio and wealth advisory business.

Commodity and Global Markets recorded a net profit contribution of $1,746 million for the period. Market facing business witnessed a strong client activity across the jurisdictions, products and sectors. Also, there were higher revenues from specialised and asset finance, commodities lending and financing. However, these gains were lowered by higher credit provision, lower trading revenues and inventory management.

A $755 million of net profit contribution was credited to Macquarie Capital, and it was lower by 57% compared to the previous year. Substantial fall in contribution was attributed to lower revenue from debt capital markets, lower investment income, higher operating expenses, funding costs and elevated credit and other impairment charges. However, the segment saw strong performance in the mergers and acquisitions business.

It was noted that market condition would be challenging due to the global impact of the pandemic and uncertainty on the global economic recovery. As a result, the group was unable to provide meaningful guidance for the year FY21. The group is committed to conservative stance to capital, funding and liquidity.

In asset management, the group expects base fees to be consistent, but net other operating income would lower due to the delays in asset sales. In Banking and Financial Services, the group expects higher deposit and loan volumes, platform volumes would be dependent on market movements, but the competitive environment will likely result in margin pressure.

In Commodity and Global Markets, the group expects lower customer activity, especially in the commodity space. A diverse product and client base would provide support amid uncertain economic conditions in the first half of FY21.

In Macquarie Capital, the group noted that transaction activity continues, but the challenging market condition would impact the number of successful transactions and cause delays in the completion of transactions. Investment-related income is expected to be subdued; however, market recovery would be beneficial.