An Audit report of the 21st century American corporation- Facebook, the social media company that has influence over 2.5 billion users across the globe, has been concluded and it is not all praises!

In 2018, Facebook agreed to become the first social media company to undertake an audit pertaining to the civil rights community. Interestingly, the related report has been unveiled at a time when racial injustice and police brutality is bringing millions of people to the streets, globally.

On 8 July 2020, Facebook’s third civil rights audit report was published, marking the end of an independent two-year review of the Company’s policies and practices by Laura W. Murphy and Megan Cacace. 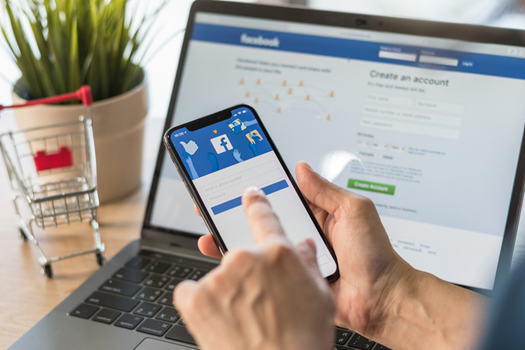 While Facebook believes that this two-year journey has had a profound effect on the way it thinks about its impact on the world, civil rights activists believe that the Company needs to act more forcefully against specific posts, and even consider altering its management structure and business model.

The investigation into Facebook’s policies and practices began in 2018 and was led by Laura W. Murphy, a civil rights and civil liberties leader and Megan Cacace who led a team from civil rights law firm Relman Colfax. The Audit was majorly encouraged by the civil rights community and some members of Congress. The aim of the Audit was to enable Facebook in identifying, prioritising, and implementing sustained and comprehensive improvements to the way it impacts civil rights.

Over the course of two years, more than 100 civil rights and social justice organizations, hundreds of advocates and several members of Congress were interviewed and sought inputs. Facebook had several interactions with civil rights leaders, resulting in a lot of face-to-face contact with Company executives.

Reportedly, civil rights leaders have been criticising one of tech’s untouchable giants, condemning Facebook for tolerating hate speech, misinformation, and harassment. An audit that was assigned by Facebook a couple of years back and which concluded recently, opines that the Company has been slow to adopt changes to protect users from discrimination and harassment.

Accusations proclaim that Facebook has lagged behind in dedicating enough resources and ramping up a multitude of civil rights challenges that have kept arising. Moreover, the final report of the recent Facebook’s Civil Rights Audit also concludes that the Company has not kept up to the expected pace concerning its diversity goals, especially in leadership positions. Consequently, it has even failed to consult the civil rights community on crucial decisions, for instance- the decisions in May of 2020 to not remove three posts by President Trump caused considerable alarm for the Auditors and the civil rights community (allowing propagation of hate/violent speech, voter suppression, mail-in-ballots and voting posts).

Indictments also state that Facebook has been far too reluctant to adopt strong rules to limit misinformation and voter suppression.

Moreover, while activist organisations have held Facebook accountable for perceived policy failings, over 900 advertisers have joined the Stop Hate For Profit campaign. This is an initiative led by few civil rights groups and other organisations, that aims to “hit pause on hate”, calls for companies to suspend advertising on Facebook and Instagram and demands that Facebook hires an executive with civil rights expertise, to name a few goals. Many prominent companies, such as – Coca-cola, Starbucks, Unilever, and Microsoft, have followed suit and pulled out their ads from Facebook.

What do Civil Rights Leaders Want?

The civil rights leaders hope for the Company to alter specific decisions of posts that should be removed or left online as well as its management structure and business model. Primarily, the report encourages the Company to do three things- 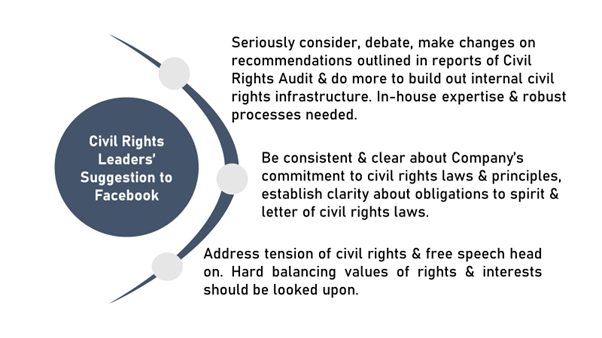 The Report acknowledges Mark Zuckerberg’s recent commitment to building products to advance racial justice, and his promise that the Company would reconsider various existing Community Standards, including how it treats content dealing with the potential provocation of violence and voter suppression. Moreover, a voting hub is likely to encourage greater participation in the November 2020 elections while offering access to more authoritative voting information.

There have been other improvements in the form of new policies that deal with voting on topics ranging from prohibitions against inflammatory ads, guidance on voter interference policy enforcement, labeling of voting posts, processes for addressing local attempts to engage in voter suppression and transparency on newsworthiness decisions.

Facebook acknowledges that it has faced heavy criticism from several civil rights communities about hateful content on its platform and is subject to boycott by many advertisers. The Company asserts that it stands firmly against hate and has clear policies against hate and constantly strives to get better and faster at enforcing them. Though this is a never-ending work, the Company has made real progress over the years.

As the Audit has analysed how Facebook can strengthen and advance civil rights at every level, the Company acknowledges that it is in a better place today than two years ago and has a long way to go.

As the report states- Facebook has made notable progress in some areas, but it has not yet devoted enough resources or moved with sufficient speed to tackle the multitude of civil rights challenges that are before it.

While all this is unfolding, the market seems to shrug off the negative news around Facebook and the stock is trading close to record highs on NASDAQ, (NASDAQ:FB) was up by 0.38 % and quoted USD 244.5 with a market cap of USD 696 billion, on 10 July 2020.