Woomera Mining Limited (ASX: WML) is involved in the mining exploration area. The company primarily operates in the exploration of lithium, caesium, tantalum and light rare earth metals. It has exploration licenses in the Musgrave Province and Gawler Craton in South Australia (SA) as well as significant lithium tenement portfolio in Western Australia (WA).

The company today, on 23rd May 2019, announced that it has signed a Heads of Agreement (HOA) with Cazaly Resources Limited to purchase an 80% interest in Mt Venn gold and nickel project of Cazaly, located 125 kilometres northeast of the township of Laverton in the north-eastern goldfields of Western Australia.

Framework for a detailed Share Acquisition and Joint Venture (JV) Agreement has been provided in the HOA, which the parties are legally bound to use their reasonable endeavours to negotiate and execute on or before 20 August 2019. The Heads of Agreement describes the key terms, which have been agreed and must be incorporated into the final agreements.

As is agreed, Woomera will acquire 100% of the shares in Yamarna West Pty Ltd, a wholly-owned subsidiary of Cazaly, which holds the tenements. Yamarna will then transfer a 20% undivided interest in the Tenements to Cazaly, and Cazaly will enter into an agreement with Yamarna to establish an unincorporated joint venture, under which the JV parties will hold the interests (Yamarna 80% and Cazaly 20%). 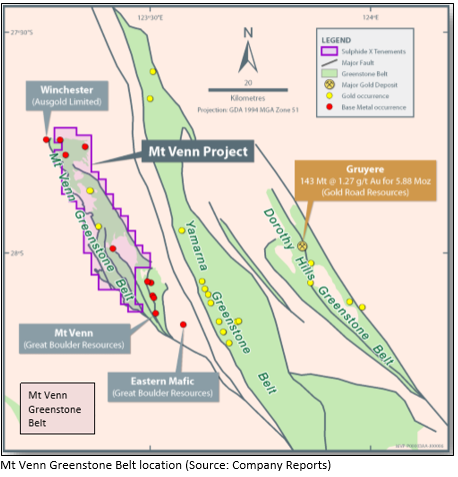 The Mt Venn project has two granted exploration licences E 38/3111 & E 38/3150. Additionally, on the granted exploration licences, the ground covered by four expired prospecting licences over the historic Chapmanâs Reward mine is due for an amalgamation into E 38/3111. The tenements which cover approximately 390 square kilometres occur over some 50 kilometres of strike of the Mt Venn Greenstone Belt giving Woomera the dominant land position over the Belt.

Several gold anomalies have been identified from the soil and rock chip sampling and RAB, aircore and Reverse Circulation drilling, including very high-grade rock chip samples at Chapmanâs Reward and Langâs Find that resulted in assays greater than 200 g/t Au.