Why Is Altura Mining Trading Lower Today On ASX?

As per the report provided by the company, followed upon a geophysical survey, Altura utilised the Induced Polarisation (IP) method at its Cleopatra Prospect. The company has completed an initial round of exploratory drilling at the prospect.

The Cleopatra Prospect is approx. 3.5Km south-east from the Altura Lithium Mine, which recently commenced commercial production, and is in the company’s E45/2363 tenement. Altura mentioned that to detect and delineate any potential responses associated with known gold anomalies, which the company discovered from surface sampling banded quartz veins and breccias, it conducted a Dipole-Dipole Induced Polarisation (DDIP) based survey in September 2018 at the prospect.

The surface sampling revealed that the area was dominated by conductive weathered overburden and the company interpreted nine near surface anomalies that required further investigation.

Altura proceeded further in February 2019 and drilled 12 Reverse Circulation (RC) holes, which accounted for 684m at the prospect. As a result, the company sampled and analysed quartz vein intersections. 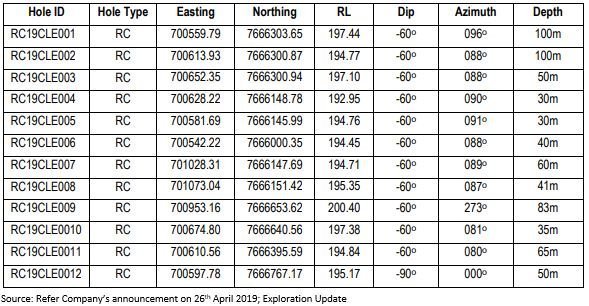 As per the company, the assay results received from drill mentioned above did not indicate the presence of significant gold mineralisation, despite the presence of substantial epidotic, carbonate and chloritic alteration within the mafic volcanic host rock.

The Hazelby Prospect or Melted Caravan Prospect is approx. 4km east of the Altura Lithium mine, and 3.5km NNE of the Cleopatra, within the E45/2363 tenement of the company. Altura previously identified mineralisation within pyritic quartzite and cherts. Hazelby is dated 3.5 billion years old and is among the oldest known prospects in the Pilbara region.

As per the company, the potential of the Hazelby Prospect provided an impetus to the company to complete further data research and field exploration work in the year 2019.