Why Are Fund Managers Turning Positive Towards Shopify?

Shopify Inc. (NYSE: SHOP) is a company operating in the e-commerce industry with headquarters in Ottawa, Ontario. Shopify’s platform is used by merchants to design, develop and manage their stores across multiple sales channels, including marketplaces, social media, web, pop-up shops and mobile.

Shopify’s Business Model: The company’s business model is composed of two key revenue streams, namely Subscription Solutions and Merchant Solutions. Subscription Solutions entail monthly fees charged for the company’s online storefront and digital store management platform. This may also include revenue from themes, apps, domain name registrations, etc. Merchant Solutions form a supplementary part of the business providing additional value to the experience of the company’s merchants. This may include add-ons in the form of transaction fees, shipping and financing services and point-of-sale hardware. A significant portion of the segment’s revenues and costs is attributable to Shopify’s payment gateway, Shopify Payments.

The company, at Shopify Unite, the yearly conference that gathers its global partners and developer community, came up with certain key announcements on its business. Let us have a detailed look at the announcements made in the conference.

The most important announcement made by the company was about set up of the Shopify Fulfillment Network in order to improve the shipping experience for merchants and customers. The company is planning to invest $1 billion to establish fulfillment centers in the United States. Over the years, space has been dominated by Amazon with a leading position in the provision of third-party fulfilment. Due to the lack of options, merchants are using Amazon services even when they are not selling their products on the platform. Lately, Amazon has been under scrutiny due to its pricing policies and is known to charge high prices from the merchants. Though Shopify is operating in the space on a much smaller scale than Amazon, the pricing practices by Amazon has provided it with a room for competition. Shopify’s fulfillment network is expected to cut shipping times and costs for the merchants, hence, passing on the benefit of cost savings to customers in the form of lower prices.

In addition, the company came up with Shopify Plus, a new platform for enterprise merchants, wherein the merchant can have a single view of the entire business. It provides an easier way to create new stores and is helpful for large brands and fast-growing companies to boost their business. The company redesigned its POS (Point of Sale) software to provide ease of use to those who sell in a brick and mortar store with a simple interface and new customer service shortcuts.

The company has introduced an altogether new online store design experience in order to help the merchants increase customer traffic. The new store design experience is aimed at providing merchants with ease to customize the stores as per their requirements in order to expand their sales by meeting the expectations of the shoppers. Changes in store design will also be reflected in the ability to display products in video and 3D models, offering merchants with new possibilities to deliver the in-store experience to attract more customers. It will also help partners integrate subscription payment solutions directly into the checkout option.

The company introduced new tools like Shopify App Bridge that helps developers embed their apps directly into Shopify and provides ease of use to merchants. Shopify App CLI helps incorporate all the app building steps in one command and GraphQL induces the speed and efficiency for building faster and stable apps for merchants.

Another development by the company was with respect to new shipping features that will help merchants to define specific rules and pricing for different products that can help create much accurate visibility during fulfillment process with a track of any activity happening in the third-party apps and services.

Understanding buying behaviour: The company recently released its first global State of Commerce Report, wherein it provided insights on buying behaviour in order to help the merchants better understand the needs of customers. It revealed its brand positioning with over 62 million buyers around the world purchasing from the same Shopify store twice. Commenting on the shopping statistics, the company revealed that Americans turned out to be the most frequent shoppers, with Germans, the fastest shoppers and Japanese, the biggest spendthrift. The company discovered that sales via online stores accounted for over 80% of the total sales.

Key Highlights of FY18: On the financial front, the company reported a 59% increase in revenue at $1.073 billion over 2017. Growth in Subscription Solutions revenue and Merchant Solutions revenue was reported at 50% and 67%, respectively. Gross profit for the period amounted to $596.3 million, up 57% on 2017 gross profit of $380.3 million. The company reported a net loss for the period at $64.6 million against a net loss of $40 million in FY17. The last quarter saw Shopify expand its market presence by launching Shopify Payments in Spain and expanding its availability in other countries, including Australia, Ireland, New Zealand, Japan, UK, U.S, Canada, Hong Kong, Singapore and Germany. This helped the company attract new merchants on the platform from North America, UK and Australia. 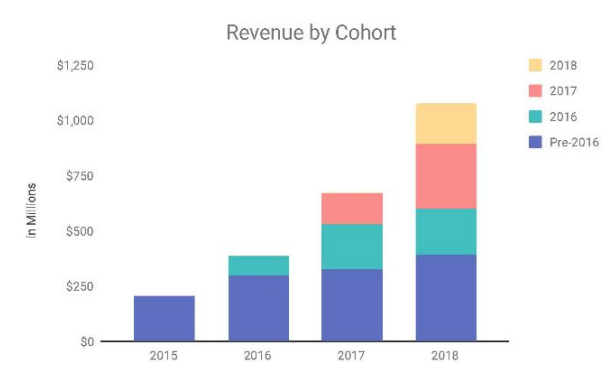 As discussed above, the company reported progress in financial performance in FY18, with a growth in revenue and gross profit. In addition, through the recent developments in place, the company has been able to expand its retailer base and enhance its international market expansion. With plans to set up the Shopify Fulfillment Network, the company is striving towards taking a competitive stand in front of Amazon. This new initiative can help the company establish a competitive position in the third-party fulfillment space, which was being dominated by Amazon. The company has been thriving to expand its presence in the market with new developments and innovation, bringing in new apps to provide better user experience and technologies to boost the business of merchants and helping them expand their international footprints.

According to analysts, the above developments by the company have led to a positive impact on its business and placed it in a better position to provide returns to its investors. The analysts believe that with these advancements in place, the company is expected to generate a high rate of sales growth for years. The stock of the company is currently trading at a market price of $311.83, down 4.6% on 24th June 2019.