Penny stocks trade at low prices, as the name suggests these stocks typically trade at a price less than a dollar. These kinds of shares, besides having a low market capitalisation they are illiquid and highly speculative by nature. Characterised by high risk and volatility, these stocks are also bucketed in the high-risk micro-cap stocks. Let us look at the recent updates and stock performance of 2 Penny stocks that are from the metals and mining industry, listed on ASX: Company profile: Hot Chili Limited (ASX: HCH) is a copper developer with its project portfolio spread across the Chilean coastal range. The company is based out of Perth and is presently developing its flagship Productora copper project in Chili. For this project, the company had partnered up with Minera del Pacíico S.A, which is Chili’s largest iron ore miner. 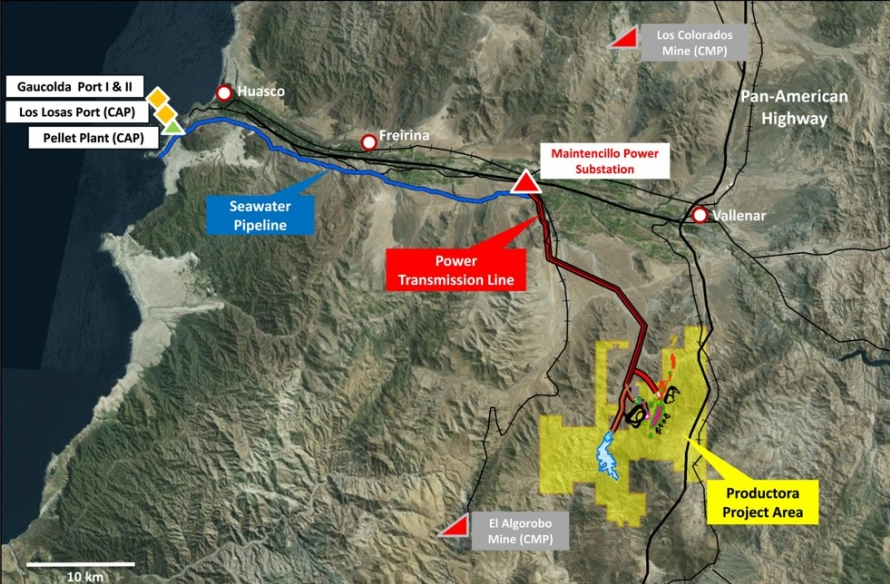 Location and Infrastructure at the Productora copper project(Source: Company website) Hot Chili has a market capitalisation of $34.5M, and the shares are quoted at A$0.030, qualifying under the category of penny stocks. Recent Updates: On 12th June 2019, the company made an announcement regarding the Cortadera copper-gold porphyry discovery in Chile. The recent data showcased a new 4th porphyry centre, much larger and stronger in magnetic signature compared to each of the company’s previously discovered three porphyries. Earlier, porphyry drilling intersection of 48m grading 0.5% copper and 0.1g/t gold from 34m down-hole (with 12m grading 1% copper and 0.4g/t gold) had been done, and it is located on the southern flank of the 4th magnetic anomaly. Meanwhile, at 1,040m, the second DD hole is being extended ahead of starting a third DD hole. The results are most likely to come next week for the first two holes. 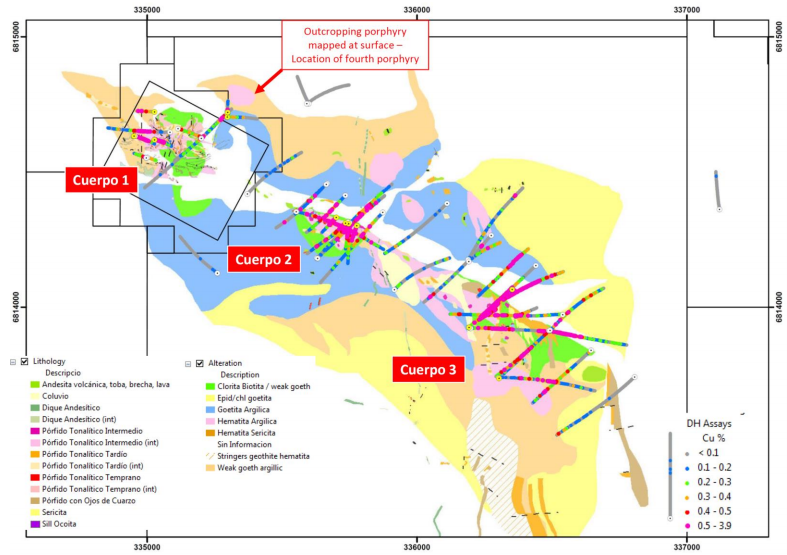 Plan view across the Cortadera discovery area(Source: Company’s report) Going back in time, the company had announced on 22nd February that it had proceeded with an option agreement to acquire 100% interest in Cortadera. In April, drilling programme comprising 17 holes for approximately 5,000m of RC and 1,500m of DD drilling had begun. 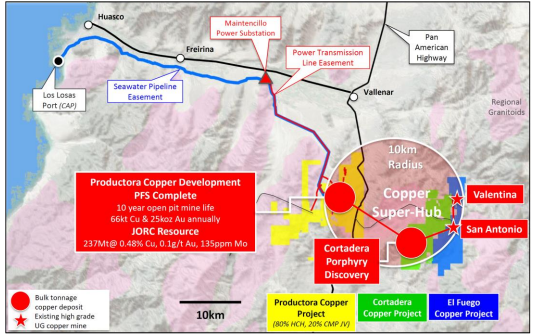 Location of Productora and the Cortadera discovery (Source: Company’s report) On the same lines, the company announced on 5th June 2019 that the first Diamond drill hole had ensured a large northern extension to the Main Porphyry at Cortadera. The second Diamond drill hole was at 840m depth and aiming at testing large extensions to bulk high-grade copper and gold mineralisation and was being extended to a depth of 1,000m. The RC drill testing of the upper near surface extent of the Main Porphyry had ensured up-dip extensions to deeper sulphide mineralisation. Share Price Information: The company was listed in 2010 on ASX. At the time of writing on 12th June 2019, the stock is trading at A$0.030, 30% away from its 52-week high price of A$0.039, In the day’s trade the shares were down by 3.226%. The stock has generated a YTD return of 238.17%. Company profile: With projects and operations in Central West of New South Wales, eastern Australia, Alkane Resources Ltd (ASX: ALK) is a mining and exploration company. Its most vital project is the Dubbo Project, which is owned by the company’s subsidiary, ASM. The company produces gold via its wholly owned subsidiary, TGO. 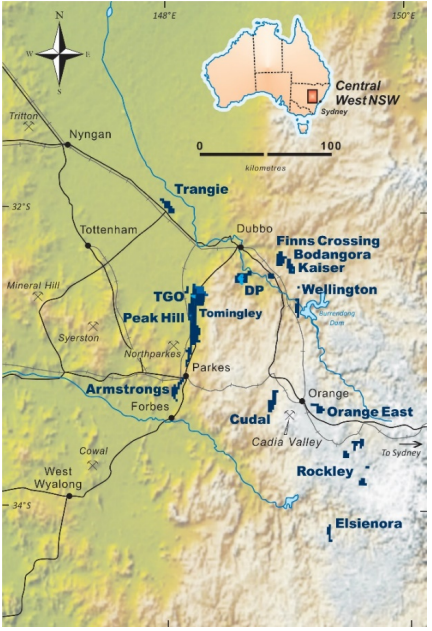 Locations of ALK (Source: Company’s report) This penny stock has a stock price of A$0.400 and a market capitalisation of A$189.79M. Recent updates: On 12th June 2019, the company revealed that it had further found Significant Gold mineralisation intercepts in the Tomingley Gold Corridor, specifically between the Roswell and San Antonio prospects. The length of this discovery is 1,600m, and it ranges 4km south of the TGO processing facility. Along with the El Paso prospect, the strike length is 2,500 metres within 8km of TGO. The intercepts between Roswell and San Antonio prospects include the following:

(Source: Company’s report) As for McLeans South is concerned, the drilling results had verified that its mineralisation connects to the northern extension of the Roswell mineralisation. Post this; the length would be more than 600m. The intercept is inclusive of the below:

(Source: Company’s report) The company notified a 60,000-metre resource definition drilling program on the San Antonio, and Roswell prospects would commence in mid-June. On 6th June 2019, the company announced that its 100% owned subsidiary ASM made a binding agreement with a Korean player, Zirconium Technology Corporation. The motive behind this agreement was to fund the final stage research and feasibility relating to a clean metal process for the conversion of metal oxide to metals of high marketable purity, inclusive of prime metals from the Dubbo Project. Zirconium Technology Corporation would give the company an IP license along with technological expertise. The company would invest $1.2 million on a pilot plant facility. On 5th June 2019, the company also provided a Tomingley Gold Production Update and released it revised FY 2019 guidance. The total gold production for April and May was 8,886 ounces and 46,319 ounces financial YTD. The production for FY19 is most likely to range between 48,000 ounces, and 49,000 ounces, which is above the upper range of previous guidance wherein the range was 42,000 ounces and 47,000 ounces. The company had reduced its cost guidance for this year to a range between $950 to $1,050 per ounce. Apart from this, Processing of low-grade stockpiles would continue this year at the design feed rate of 1 million tonnes per annum. These total to almost 700,000 tonnes and are expected to average approximately 0.7 g/t Au. Post this, the processing would revert to the underground ore. The development of the underground operation is ahead of its assigned schedule and on budget. The average Development rates from the single jumbo were almost 300m per month for the last three months. The grade control drill began in April, and the development had turned out at the first ore level, and the first stoping ore is anticipated in August. 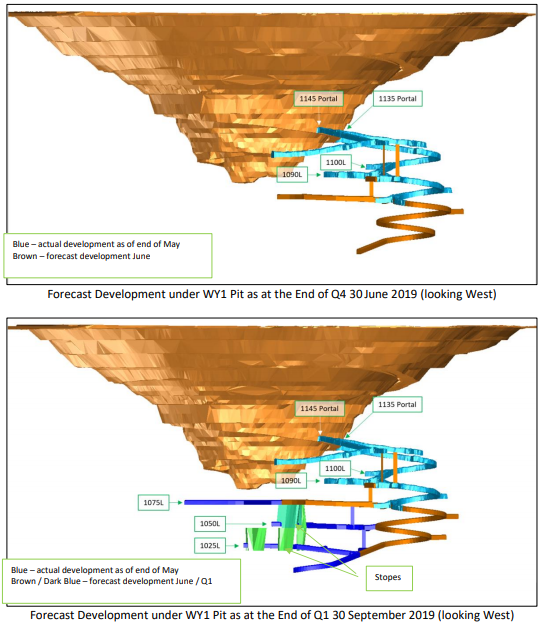 Forecast development (Source: Company’s report) Share Price Information: The company was listed in 1980 on ASX. By the close of the day’s trade on 12th June 2019, the stock was trading at its 52-week high price of A$0.400, up by 6.667% as compared to its previous closing price. The stock has generated a YTD return of 87.50%. Disclaimer This website is a service of Kalkine Media Pty. Ltd. A.C.N. 629 651 672. The website has been prepared for informational purposes only and is not intended to be used as a complete source of information on any particular company. Kalkine Media does not in any way endorse or recommend individuals, products or services that may be discussed on this site. Our publications are NOT a solicitation or recommendation to buy, sell or hold. We are neither licensed nor qualified to provide investment advice.
All pictures are copyright to their respective owner(s).Kalkinemedia.com does not claim ownership of any of the pictures displayed on this website unless stated otherwise. Some of the images used on this website are taken from the web and are believed to be in public domain. We have used reasonable efforts to accredit the source (public domain/CC0 status) to where it was found and indicated it below the image.