One of Australia’s leading energy companies, Viva Energy Group Limited (ASX: VEA) deals in manufacturing, distribution and supply of petroleum products to retail and commercial customers. The company is the only supplier of high-grade Shell fuels and lubricants in Australia having a broad network of over 1,200 service stations throughout the country. One of the only four refineries in Australia, Geelong Refinery is owned and operated by Viva Energy.

The company released a presentation on its Annual General Meeting 2019 today. The presentation released by the company incorporated the lost time injury frequency rate of the company, its operational highlights and financial performance.

However, according to the company’s CEO Chief Executive Officer, Scott Wyatt, the lost time injury rate of 1.12 in 2018 is low when compared to other industries. Mr Wyatt emphasised that Viva Energy aims to deliver attractive and sustainable shareholder returns and strong cash generation in future with a focus on maximising cash returns from refining, operational efficiency, restoring the performance of the Alliance network and growth in higher return segments. 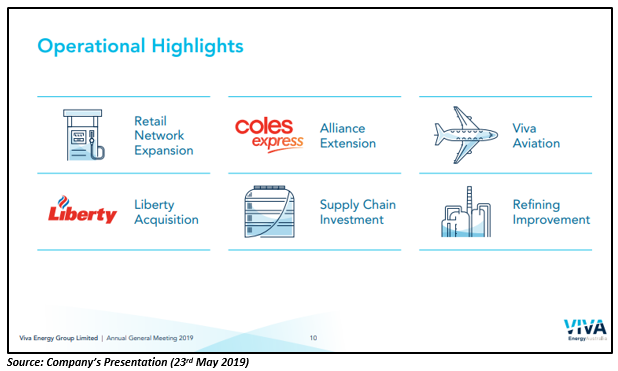 The company reported GRM of US$6.5/BBL with a crude intake of 3.8 Mn BBLs for March 2019. The improvement in April’s GRM is impacted by growth in regional refining margins compared to the first three months of 2019.

Recently, the company published its Annual Report for the period ended 31st December 2018. As indicated in the report, the company supplied approximately 14 billion litres of petroleum products during 2018, which is close to a quarter of Australia’s fuel needs.

During the period, the company’s Underlying NPAT (on a replacement cost basis) and its revenue stood at $293 million and $16,395.1 million, respectively. Viva Energy also declared a fully franked dividend of 4.8 cents per share for the period of six months ended 31st December 2018. 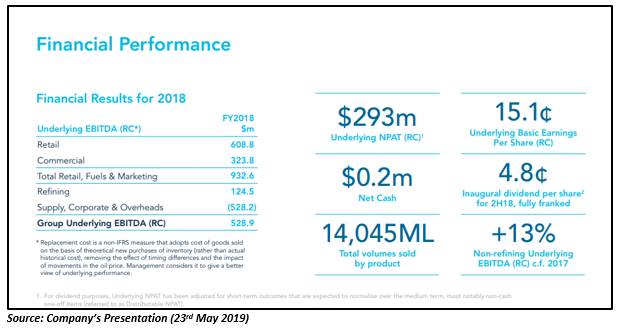 The company also acquired the remaining 50 per cent interest in Liberty Oil Holding Pty Ltd’s wholesale business for a total consideration of $42 million on 27th February 2019.

Viva Energy announced the extension of the Alliance agreement with Coles Express until 2029 on 6th February 2019. Under the New Alliance Agreement, Viva Energy had to pay a commission per litre to Coles based on fuel volumes achieved.