Vintage Energy Ltd (ASX: VEN), established in 2005 and based in Goodwood, Australia, is engaged in the exploration and development of oil and gas properties in Australia.

According to the terms of the MoU, APA will undertake a work program to figure out a pipeline route to connect the Galilee Basin in Queensland to Australia’s east coast gas markets (as depicted in Figure 1). The route proposed to the market by APA will also allow for gas to be supplied to the large mining projects planned for the Galilee Basin. This would give them an alternative to using diesel for their operations.

The work program will include on the ground surveys, engagement with local stakeholders, undertaking initial environmental studies and applying for a Pipeline Survey Licence. 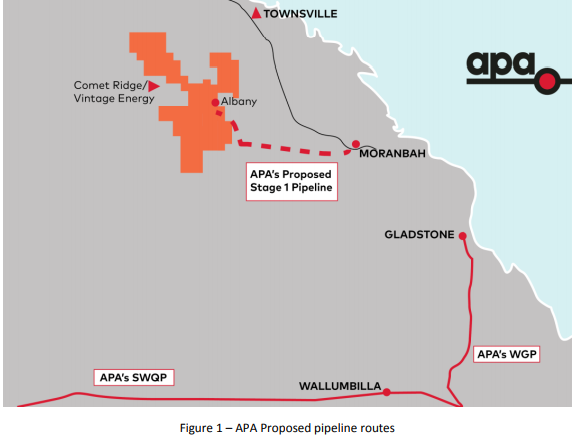 APA, Comet Ridge and Vintage have also agreed on a framework to negotiate a Gas Transportation Agreement (GTA). Under this GTA, APA would build, own and operate new pipeline infrastructure and other related infrastructure for the transportation of gas from the Galilee Basin Deeps Joint Venture permits held by Vintage and Comet Ridge.

Commenting on the significance of the MoU, the Managing Director of Vintage, Neil Gibbins was quoted, “We believe that the Galilee Basin has the potential to produce material quantities of gas. In order to fully commercialise any discovered gas, we will need to have access to the Australian east coast markets, so this MOU with APA is a large step toward making this possible. The timing of this MOU with APA couldn’t be better considering our imminent appraisal drilling campaign of the Albany-2 and Albany-1/ST1 wells.”

Earlier on 28 May 2019, Vintage Energy informed the market that the recent span of heavy rains had delayed the movement of the Ensign 932 rig from the Cooper Basin to the Galilee Basin for the drilling of Albany-2 and Albany-1/ST1. However, the roads are now drying up and the operator, Comet Ridge hopes to mobilise the rigs in early to mid- June 2019. In addition, the construction of the wellsite pad at Albany-2 restarted on 7 May 2019 and is approaching completion.

Both the Albany-2 and Albanty-1/ST1 are planned to be stimulated (preparations underway) later in 2019, after which the production testing will be conducted. Condor Energy Services Ltd has been selected as the preferred provider for the same.

The company also added in the announcement that while the rain may have delayed the program, it did provide the much-needed relief to the drought-stricken landholders in the area.

This equity stake would increase to 30% upon completion of the Stage 2 farm-in funding obligations associated with completed Koburra 2D seismic program and the drilling of Albany-2 and Albany-1/ST1.