Venus Metals Corporation Limited (ASX: VMC) is engaged in the exploration of gold, base metals, diamonds, etc. It was officially listed on the ASX in June 2007. On 28th May 2019, the company, by release, updated the market about the start of RC drilling at Currans Find Prospect, a part of the Youanmi Gold Project Western Australia. VMC in combination with Rox Resources Limited, commenced circa 1,200m reverse drilling. Venus Metals anticipates the programme to be accomplished by early June.

Referencing to the company’s previous announcement made on 23 April 2019, VMC planned a shallow RC drilling programme at the Taylor’s Reef Discovery. 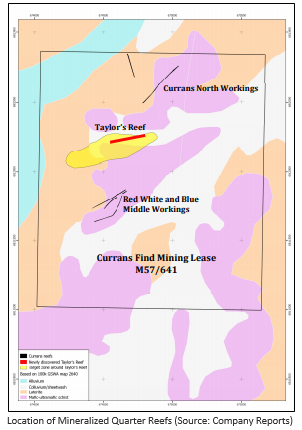 Furthermore, VMC inked a purchase agreement with Murchison Earthmoving & Rehabilitation Pty Ltd, which is a wholly-owned company of Mr Doug Taylor. The company jointly entered in an agreement with Rox Resources Limited to acquire a joint interest of 90% in ML 57/641 “Currans Find” of 300 hectares and ML 57/642 of 59 hectares “Pinchers”, respectively. The company reported that 90% interest is being shared between Venus and Rox equally and the remaining 10% held by Mr Taylor. 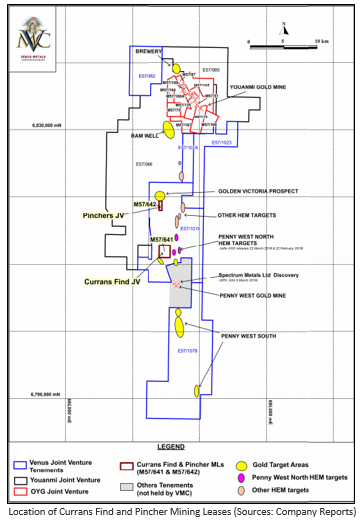 Moving to the highlights of the Youanmi Vanadium Project. The total resource has been estimated to be 134.73 Mn tonnes grading 0.34% V2O5 in accordance with new JORC 2012. The measured indicated and inferred resources contain 458,900 tonnes of V2O5.

On the project background front, VMC has an extensive tenement stake in the Youanmi Greenstone Belt, which is in Western Australia. In addition, the company holds all the exploration rights in the north and south of the Penny West Deposit, where Spectrum Metals Limited recently announced high-grade gold discovery extensions. The company signed two option agreements, which allow it to purchase the historical Youanmi Gold Mine Mining Leases along with all associated infrastructure and the mine village in 2018. Widenbar and Associates evaluated a near surface exploration target of 2.0 to 2.6 million tonnes at 1.05 to 1.30 g/t Au. In reference with ASX announcement dated 22nd March 2019, a substantial RC drilling programme has been scheduled to start as soon as all statutory approvals are in place.