Financial Sector company Eclipx Group Limited becomes one of the top gainers on ASX today as its stock price zoomed up by 28.324% to finish the week at $1.110 on 31 May 2019.

The positive market sentiments were recorded after the company released its half-yearly results this morning. Although the report card was much of a dismal, investors favoured the company on exchange for its long-term potential and simplification plans.

In 1HFY19 report, Eclipx posted a decline of 15% in its net operating income to $132.0 million for the six months ended 31 March 2019. Earnings before Interest, Tax, Depreciation, Amortisation and one-off costs (including goodwill impairment) (EBITDA) for the period was down 46% to $31.3 million, compared to the previous corresponding period.

On the bottom-line front, the company reported statutory loss after tax of $120.3 million, including the non-cash impairment charge of $118.4 million. This compares to the profit $25.0 million reported in 1H FY18. The headwinds were claimed as the impact of underperformance in the non-core businesses being Right2Drive, GraysOnline and Commercial Equipment.

To address this underperformance, Eclipx has come up with simplification plan as per which the company now commits to focus just on its high-quality core fleet and novated businesses which have been delivering stable, predictable earnings and a strong return on capital for over 30 years, through varying market conditions, said Eclipx newly appointed CEO Julian Russell.

Eclipx’ simplification plan reportedly includes the divestment of divestments of ECX non-core businesses, the renewal of its senior leadership team and the initiatives to right size the Group cost base. As announced by the company on 16 April 2019, ECX current Chief Financial Officer Garry McLennan has announced his intention to retire; search for the successor remains underway.

Have a look at Eclipx’ recent business updates

The presentation was focused on Boral Australia, which forms 53% of Boral Group’s revenue, as per 1HFY2019 results. The company highlighted the outstanding performance of Boral Australia, including the strong and above cost of capital returns from the division. 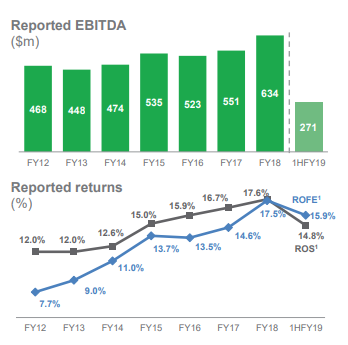 Looking forward, the company expects Boral Australia to deliver around $30 million in FY2019 on the back of solid property earnings. Boral Australia tightens its belt for future growth by shifting segment focus from residential to infrastructure due to the meltdown going-on in the Australian housing market.

Its 2H FY2019 priorities remain at carrying out an organisational effectiveness review to lower overheads and rightsizing to align resources & demand. Reducing costs and achieving supply chain optimisation outlines the other related objectives, the review aims at.