In this article, we would discuss two stocks from the retail industry. These two stocks have been in the light due to some reasons, which are discussed in detail below. The Australian benchmark index closed at 6716.1, up by 0.4% or 26.3 points on 11 July 2019.

Founded in 1979, Michael Hill International Limited (ASX: MHJ) is a dual-listed (on ASX and NZE) retail jewellery company from New Zealand. Currently, the group manages about 306 stores in ANZ & Canada, and it is headquartered in Brisbane, Australia.

On 10 July 2019, Michael Hill notified on the historic Award compliance issues in Australian region. Accordingly, the company reported non-compliance with some requirements of the General Retail Industry Award. Subsequently, it announced a full remediation program post the initial review of Australian retail employment contracts and rostering practices for several of its store-based workforce in Australia.

Also, the review had been concluded with the assistance of PriceWaterhouseCoopers, which has revealed some historic misapplication of the Award across selected sample groups of team members over several years.

Besides, the company has initiated a more detailed review of all employee records, rostering practices and payments. Further, it expects to complete this in several months because of the volume of data and complexity of issues persisting in the records. Nevertheless, it intends to undertake the review with urgency.

Reportedly, the issues during the last six financial years would be remediated by an estimated one-off cost in between $10 million to $25 million. Presently, the company does not expect that rectification and remediation would cause any material impact on the underlying earnings of the company for FY20 or beyond.

As per the release, the cumulative same store sales continued to improve, as the fourth quarter replicate stabilised sales from the prior periods. Also, the company is actively managing its overall inventory, with the concentration on dipping inventory compared to previous year closing levels, which witnessed better working capital and cleansing of aged/ off-range stock with some influence on gross margin.

Further, the margin pressure continues with gross margin impacted by the competitive retail market and related clearance activity. Besides, the FX environment impacted the cost of goods sold, and the full year gross margin contracted to 61.1% against 62.8% for the prior year.

Reportedly, the company has been witnessing growth in e-commerce sales with the full-year result of $16.0 million for the year to 30 June 2019. Also, the growth in e-commerce stood at +43.6% compared to FY18, and e-commerce sales stood at 2.8% of total sales. Further, Michael Hill improved on the brand collection sales, which depicted 32.5 percent the of entire product sales for FY19 period due to the launch of fresh branded bridal collections. In addition, the company is working towards managing the store portfolio optimally; therefore, it has shut down eleven stores who were under-performing and has opened ten new ones.

In Australia, the business was down by 5.9% in the total same store sales for the year â better than the negative of 8.8% in FY19H1. Also, the company closed eight underperforming stores while four new stores were opened, and the total number of stores were of 168 as on 30 June 2019.

In New Zealand, the total same store sales contracted at a lesser rate at -5.9% for the year against the negative 6.4% in FY19H1. Michael Hill closed two stores and opened two new stores; the total number of stores stood at 52 as on 30 June 2019.

In Canada, the total same store sales contracted at a rate of -1.6% for the year compared to a negative 2.7% noted in FY19H1 period. Besides, a store was shut down, while four new ones were opened in the year, which came to a total number of eighty-six stores as on 30 June 2019.

It should be noted that the above-mentioned figures provided by the company are un-audited. In addition, the numbers mentioned for 11 months period depicts accounting adjusted sales outcome along with June preliminary sales before the final accounting adjustments.

Woolworths Group Limited (ASX: WOW) is a large-cap company in Australia. The stock of the company is constituent of S&P/ASX 200, S&P/ASX 200 Consumer Staples (Sector), S&P/ASX 50, S&P/ASX 20 and more. 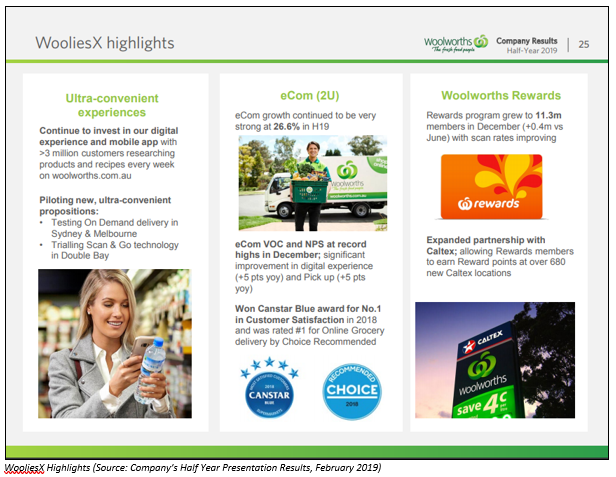 Currently, the retailer has been under pressure by the media regarding the aggressive stance on mitigating prices. According to a survey conducted by a prominent investment bank, the tensions between retailer and suppliers continue to rise due to strategies instigated to mitigate price rises. Also, the survey had reckoned that the outcomes could be losing market share to competitors or Woolworths should be collectively decide with suppliers.

Nevertheless, the survey depicted increased overall supplier score compared with prior year survey. In addition, the market share of Woolworths might improve, and competitors are closing the gap on supplier partnerships.

Recently, a federal court had a ruling in favour of Woolworths. The case had been filed by the Australian Competition & Consumer Commission (ACCC) regarding the environmental claims. As per the release by ACCC, the court had stated the practices by the retailer were not misleading or false. Further, the claims by the company related to products such as bowls, cutlery and disposable plates of âSelect ecoâ range were not misleading.

Tags:
Woolworths Group Ltd (ASX: WOW) ASX: MHJ
All pictures are copyright to their respective owner(s).Kalkinemedia.com does not claim ownership of any of the pictures displayed on this website unless stated otherwise. Some of the images used on this website are taken from the web and are believed to be in public domain. We have used reasonable efforts to accredit the source (public domain/CC0 status) to where it was found and indicated it below the image.