Partner Agreement with L3Harris- On 11 July 2019, Kleos Space announced to have entered into a commercial channel partner agreement with US-based technology firm L3Harris Technologies for the marketing of the Kleos product suite to government agencies in the United States.

Under the terms of the agreement, L3Harris will place the Kleos product suite on their GSA Earth Observation Solutions (EOS) Schedule and through a collaboration with the organization, prepare and present mission scenario demonstrations to the National Geospatial-Intelligence Agency. 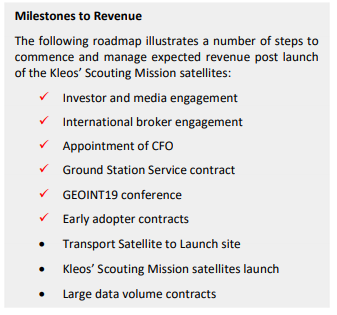 Sales Expert for South American market â On 10 July 2019, the company informed the stakeholders of the appointment of regional space expert, Pierre Duquesne as sales representative for the South American market to target planned investments of more than EUR 45 billion in the maritime and port sector in Latin America and the Caribbean. Mr Duquesne, a Franco-German executive, holds over twenty years of experience in different business development, marketing, sales and general management roles in the regional space industry, most recently as Managing Director for Airbus Intelligence in South America.

Pierre will supply his services via his âPrime Space-as-a-Serviceâ consultancy that aims to support the adoption of new âAs-A-Serviceâ business models.

According to The Corporacion Andina de Fomento (CAF), the development bank of Latin America, the outlook by 2040 for the maritime and port sector in Latin America and the Caribbean suggests an attractive environment for growth with planned investments over EUR 45 billion in the coming decade.

The companyâs initial strategy as laid out in AGM Presentation 2019 illustrated briefly as follows. 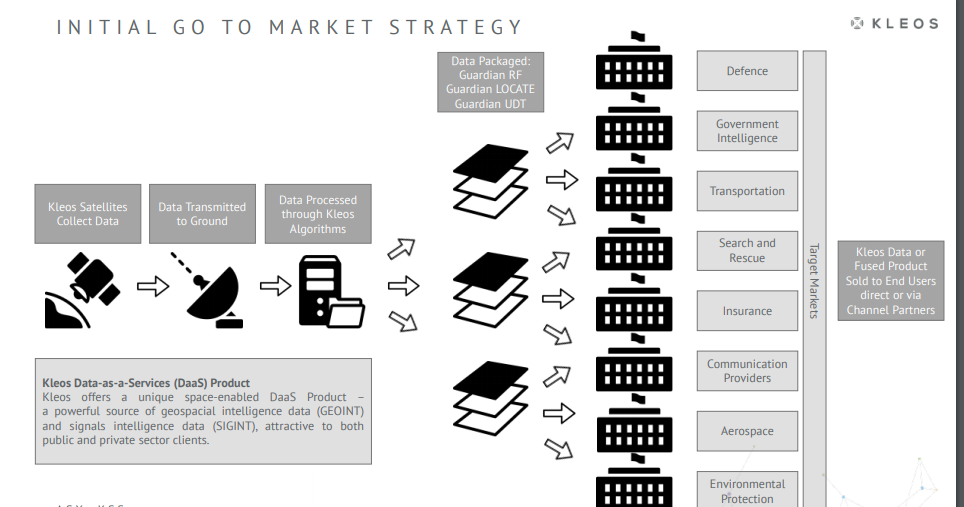 In the presentation, the company also mentioned that its mission is to deliver maritime RF activity data to help disrupt illegal fishing, smuggling, trafficking and security & border challenges, all worth more than USD 80 billion.

The financial grant aid means Kleos is a part of the European Space Agency Business Applications programme process. The company is targeting to be on contract with initial funding receipts by the end of the year 2019.

Virgin Australia Holdings Limited (ASX: VAH), based in Bowen Hills, Australia, is engaged in the operation of domestic and international airline business in Australia. Virgin Australia Holdingsâ market capitalisation stands at around AUD 1.44 billion with approximately 8.45 billion shares outstanding. On 11 July 2019, the VAH stock settled trading at AUD 0.165, down 2.941% by AUD 0.005 from its previous closing price.

Details of Affinityâs investment in Velocity were originally announced to ASX on 29 August 2014; however, there is uncertainty regarding the terms/timing of any such exit transaction.

On 4 July 2019, it was announced to the market that Virgin Australia received the interim authorisation from ACCC (Australian Competition and Consumer Commission) to develop cooperation with Virgin Atlantic on operation flights between Australia and the United Kingdom/Ireland, via Hong Kong, Los Angeles and any other possible mutual connecting points. Currently, the two airlines, which already have a codeshare arrangement, do not operate flights on any of the relevant routes.

Therefore, the above authorisation would enable the two companies to coordinate on a couple of business aspects such as combined management of prices, inventory, and marketing strategies.

In addition, Mr Hou Wei was appointed as Non-Executive Director. Hou Wei will serve as the representative of the HNA Group. Moreover, Mr Du Ming was appointed as Alternate Director for Mr Hou on the Board of Virgin Australia in late May 2019.

The recent changes were introduced to the companyâs board after the resignation of two leaders. The former nominated representative for HNA Group, namely, Mr Zhang Kui, and his Alternate Director, Mr Luo Jiaqui, decided to resign.

Trading Update - Virgin Australia Holdings, on 17 May 2019, released its earnings guidance for the financial year 2019. As per the company, the FY19 underlying earnings are expected to be at least $ 100 million down on FY18 comparative result of $ 64.4 million, reflecting uncertainty of revenue trading conditions in the domestic market and inclusive of annual fuel and foreign exchange headwinds in excess of $ 160 million.

In addition, VAH estimates revenue growth to be around 6% for FY19, even though the revenue growth has moderated for the second half of FY19 and expected to be lower than 2% for the last two months of FY19.

However, the company delivered a record 1H underlying result despite higher fuel costs and supported by the core VA Domestic business (see figure below). 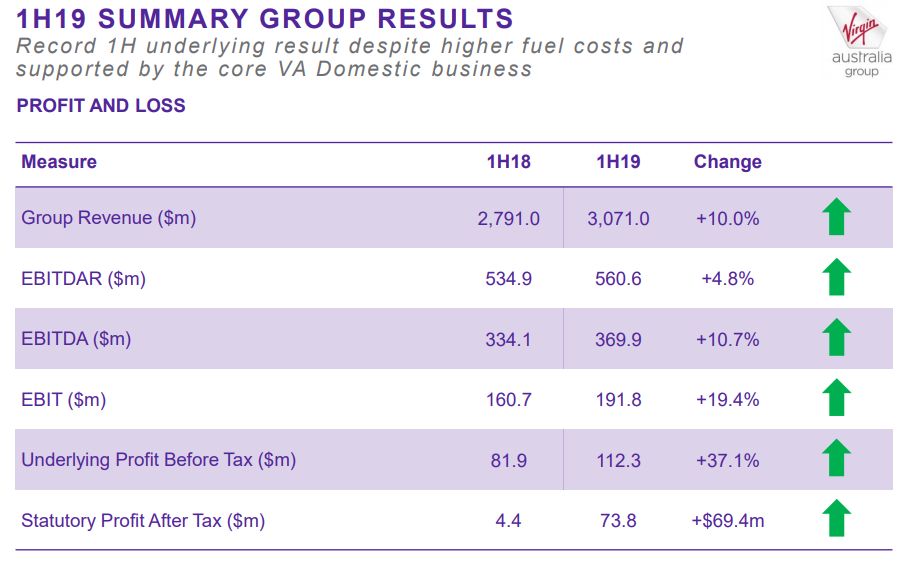