Cirrus Networks Holdings Limited updated the exchange on its recent contract wins and provided the market update on the results for FY19. Regeneus Limited released an announcement regarding the pro-rata entitlement offer along with an update on business restructuring for the purpose of saving costs. Let us now look at the details on the above announcements.

Contract Wins: The company recently updated that it has secured two contracts with the WA state government with total value in excess of $5.5 million. One contract relates to the provision of Cisco SmartNET maintenance and support to the State Government’s Child and Adolescent Health Service. The 3-year contract renewal will involve maintenance and support services being extended to Perth Children’s Hospitals’ Cisco Infrastructure. The contract was previously provided to the company in 2016. The second contract involves the provision of a high-performance storage solution to the WA Governments’ Public Transport Authority. A week back, the company secured another contract with the ACT Government for maintenance and support of their Cisco infrastructure over the next 3 years. The contract represents a monetary value of $5 million.

Market Update: The company recently released a market update providing details on unaudited results for FY19. Total revenue for the year is expected to be $88 million, up 16% on previous year. The company expects to report record EBITDA amounting to $1.8 million. Strong growth in FY19 is driven by an overall increase of 36% in services revenue along with an improved performance in terms of gross margin. An uplift of 80% in services gross margin resulted in total gross margin of 46% in FY19, as compared to 35% in FY18. Overall blended gross margin for the period increased to 18%, as compared to 15.4% in FY18. During the year, the company generated record cash from operating activities amounting to $2.16 million.

Managed services revenue in FY19 increased by 91% in comparison to FY18 revenue. Gross margin in the category achieved a growth of 181%, with gross profit of $3.7 million in FY19, as compared to FY18 gross profit of $1.3 million. The company witnessed a lower than expected result for product revenue due to delay in some significant contracts to FY20, which were earlier expected to occur in Q4FY19.

The revenue growth and strong contribution to the gross margin line by services suggest that, the strategy of growth through higher margin services and diversification of geographical base have resulted in sustainable improvements in financial outcomes.+ 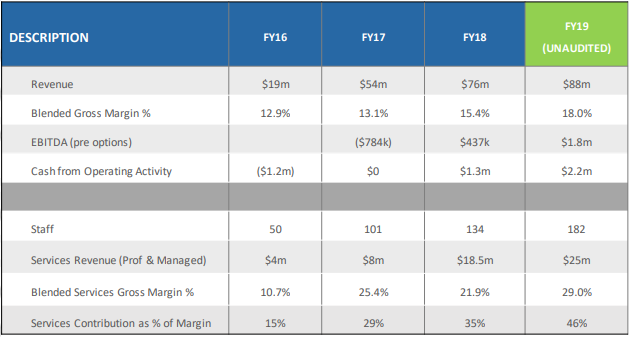 Outlook FY20: The company has stepped in into the year closing a number of significant deals that were earlier expected to be closed in Q4FY19. The new contracts are in addition to the company’s new managed services contracts valuing more than $3 million in Canberra. The company signed these contracts in H2FY19, which will deliver a full year impact in FY20. The company has a strong pipeline of opportunities to drive further growth in the coming year. In FY20, the company expects the combination of professional and managed services gross margin to cover overhead costs during the period. The breakeven point is expected to occur in Q4FY20. Overheads during the period are expected to increase by 2.3% in FY20, as compared to $1.2 million per month in FY19. Revenue for the year is expected to be approximately $100 million on the back of higher margin service contracts. Gross margin contribution from all services is expected to be more than 50% of the overall gross margin.

Entitlement Offer: The company recently provided an update regarding the pro-rata non-renounceable entitlement offer. The offer booklet and personalised Entitlement and Acceptance form related to the offer has been released to the shareholders. The offer involves an issue of approximately 39,689,190 new fully paid ordinary shares to eligible shareholders. Regeneus will offer the shares on the basis of 1 new share for every 6 existing shares at an issue price of $0.08, that will help raise a total amount of approximately AUD$3.2 million.

Restructuring of Business: The company has recently completed the restructuring of its operations that has resulted in a reduction of 50% in recurring operating costs, to $250,000 per month. The restructuring aims at aligning the company’s operations with its revised strategy for utilising its Progenza and Sygenus technologies, providing an extended cash runway to complete a major licensing deal of OA in Japan and developing therapies for the global pain market. The restructuring exercise involved reduction in headcount of employees, that better aligned with the company’s resources and its strategic priorities. In addition, the company is planning on delivering further cost savings by securing new smaller premises and will be relocating from its current location.

As a part of the restructuring, the company’s CEO has agreed to reduce his potential cash compensation of $650,000 per annum to $290,000 per annum, with an objective to maximise cash utilisation by the Company. In order to support the company’s plan to bring Progenza for osteoarthritis for marketing in Japan by 2023, executive director and CSO, Graham Vesey agreed on a reduction of his executive role to reflect the reduced focus on the company’s RGSH4K and Animal Health platforms. This will reduce his remuneration to $140,000 per annum. The executive remuneration reduction has resulted in total cost savings of $605,000 and provides for more efficient use of cash.

During the six months ended 31 December 2018, the company reported a loss of $2.7 million, broadly in line with prior-year, corresponding period loss. 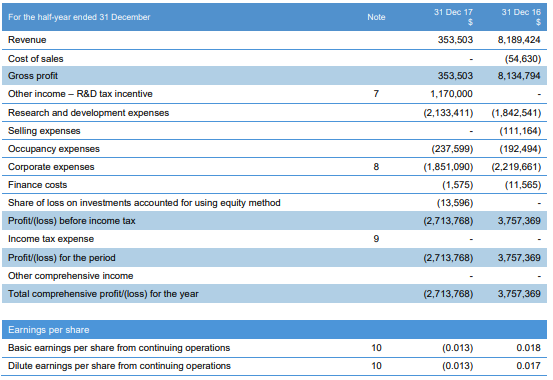