Cannabis is one of the growing industries in the world. Cannabis, a plant with an ancient history, is a legalised sector, anticipated to grow beyond double the size it is currently, in the upcoming 5 years period. Australia is well positioned to capitalise on the growing demand for medicinal cannabis, or it could be said that the country is actively capitalising on the present opportunity.

Australia legalised cannabis exports in 2018, and the country is meeting a substantial demand in the world through the export of medicinal cannabis. Pharmaceutical companies are processing cannabis into medical grade cannabis. Global demand is mostly driven by North America and Europe, which depicts a disadvantage to the Australian cannabis producing companies on the back of geographical freight disadvantage.

Some of the big Australian cannabis companies have been building reputation, globally, and the demand for Australian medicinal cannabis products is growing gradually. Now, the world has countries wherein the recreational uses are legalised. The other nation, who has taken a step ahead in legalising cannabis for recreational purpose is Canada, which has further created an opening in the sector. The cannabis market might face deficit in its supply because of the rising demand of cannabis.

Let us now look at the three cannabis stocks as follows:

On 25 June 2019, Althea Group Holdings announced that it has furthered its ties with the Drug Science Medical Cannabis Working Group. The partnership with the independent scientific committee is for growing the number of patients recommended with medical cannabis in the UK region.

It was reported that Drug Science would be launching the United Kingdom’s first national pilot for medicinal cannabis through its ‘Project TWENTY21’. Also, the project would be launched on 18 July this year, and it is targeting to register twenty thousand patients before 2021 concludes. Furthermore, Althea has been picked from a limited number of medicinal cannabis companies for supplying a range of its products on commercial terms.

Reportedly, Project TWENTY21 would be targeting patients suffering from chronic pain, anxiety, multiple sclerosis, Tourette’s syndrome and PTSD with a focus on the veteran community. It is reported that the project would exclusively target the patients, wherein the alternative treatment method had been unsuccessful. 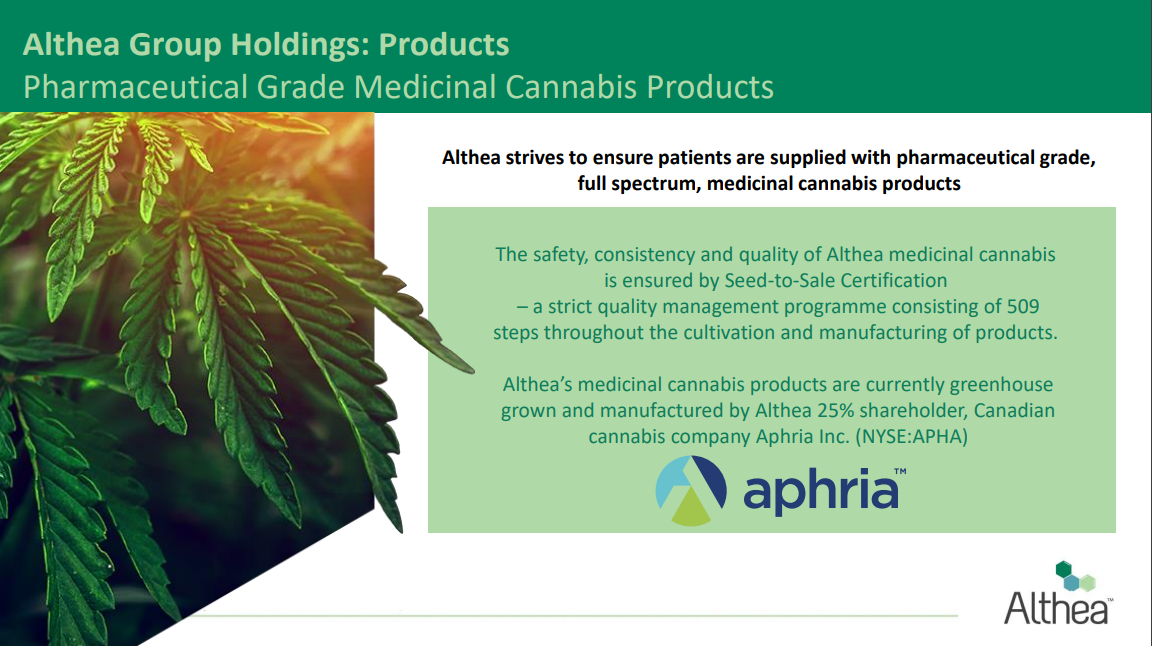 As per the release, the project intends to develop a body of evidence through a real-world data registry to record the safety, efficacy, patient feedback and quality-adjusted life year (QALY). Later, the data will be utilised to aid in the applications to health authorities in the anticipation of a fresh regulatory system for medical cannabis in the United Kingdom region.

It was reported that the patient treatment and monitoring would be administered by My Cannabis Access Clinics and allied doctors in locations that include London, Glasgow and Bristol. Also, the pilot is scheduled to commence in Q4 CY19, and potential patients would be able to register for participating in the pilot via its website.

Dr Robert Pawinski, Chief Medical Officer of Althea Group, stated that the company is proud to be able to supply the medicinal cannabis and resources for the national pilot to ensure patient access. He also mentioned that the company believes the trial program would provide significant data, which would provide basis for the utilisation of medicinal cannabis and notify the public health and shareholder decisions.

Prof David Nutt, Chief Scientific Officer and Chair of the Scientific Committee of Drug Science, stated that collectively with the United Patients Alliance – the first medicinal cannabis support group in the UK, leading academics and several cannabis producers, Drug Science will initiate a treatment network for a maximum of 20k patients. David Nutt mentioned that the opportunity would provide access to vital therapy without breaking the law.

Clarke French, Director & Founder of United Patient Alliance Director, stated that the Alliance had been delighted to partner with Drug Science on Project TWENTY21, and the alliance believes that it is a vital initiative. He also mentioned that policy which was based on evidence and availability of cannabis medicines on NHS is deserved by the people suffering from the ailments in the United Kingdom region. Additionally, a body of evidence would provide a basis to allow cannabis medicines availability to the needy patients.

In an ASX announcement dated 21 June 2019, Althea Group reported that its medical cannabis had received its first patient prescription in the United Kingdom. Additionally, the permit for a manufacturing and cultivation facility in Australia was granted by the Frankston City Council.

Althea asserted that the first prescription in the United Kingdom is the result of continuous work since the company entered into the highly regulated UK market. It expected to receive more patients’ prescription in the upcoming period, and the demand would fulfil through the supply coming from Australia.

Althea believes recent developments in the United Kingdom would create an important distribution channel for the company’s medicinal cannabis, which is manufactured in Australia. It was reported that the newly permitted manufacturing and cultivation facility had been approved by the Office of Drug Control (ODC), and the receipt of permit is a significant step in the progress of the project.

Josh Fegan, CEO & Managing Director of Althea Group, stated that the group is excited to receive the first prescription for the company’s medicinal cannabis in the UK, and the achievement is very significant. He mentioned that the preparation and work delivered such results, and thanked the Victorian Government specifically Invest Victor and the council for the permit of the manufacturing and cultivation facility.

Agricultural technology company CropLogic Limited (ASX: CLI) is a provider of cutting-edge technology to growers supporting them in making decisions.

On 25 June 2019, CLI reported the commencement of hemp farming at the company’s popular 500-acre Trial Hemp Farm in Central Oregon, United States. The farm is operated by LogicalCropping – a wholly owned subsidiary of CropLogic Limited.

Irrigation Methodologies: Small-scale farm cultivators use drip tape & mulch plastic method as an irrigation methodology. The procedure of installing this irrigation system involves laying the drip tape and mulch plastic. The drip tape is then connected to a high-pressure hose and an irrigation pump. A machine is used to plant the seedlings through poking a hole in the mulch plastic, which leads to providing water. Later, a farm worker does the work of planting.

The procedure is complicated in comparison to other methods; however, the method gives positive contributions on the yield in plant volume and its CBD percentage. The company plans to utilize the technological capabilities by using agronomy skill and its AgTech products. CropLogic intends to use the pivot irrigation methodology to compare yield rates and develop and optimise an evidence base for this season.

James Cooper-Jones, CEO of CropLogic, stated that LogicalCropping had achieved a milestone on time due to a dedicated and experienced management team with demonstrated experience of years in cropping and plant science. He also mentioned that the attention in the company’s farm management, agronomy and AgTech skill along with LogicalCropping as a best CBD generating hemp biomass source is still rising, with the progress made on it not gone unnoticed.

On 29 May 2019, CropLogic announced that a debt instrument for USD$4.25 million had been agreed. Of the total, USD$2.25 million was available immediately, while the rest of the funding would be available on the same terms. It was reported that the CropLogic is fully financed for the hemp production in 500 acres. With the debt instrument, total funding stands at over A$9 million.

As per the release, the terms of the funding involve a base interest rate of 9.5%, and repayments would start post the completion of seven months. Also, the term includes a fixed conversion of 6 cents. Furthermore, the investors include a consortium of North American & European investors led by Atlas Capital Markets, and the consortium has experience in investments in the industrial hemp industry.

Outlook: CropLogic believes the hemp network of consortium would be beneficial to the company’s growth strategies; hence, the company incentivised the consortium through royalty to increase the global hemp sales of CropLogic. It expects to use the funding to advance industrial hemp trial farm, which had raised over A$9 in the previous four weeks prior to this announcement.