On 31 July 2019, the company released the activities report for the quarter ended 30 June 2019. Accordingly, it was asserted that the company had utilised the capital, it had raised during March this year.

AVZ mentioned that the assays from drilled holes in 2018 were received and analysed during the past two quarters, which resulted in a material change to JORC Mineral Resource of Roche Dure prospect. Also, it has improved the quality and not the quantity. Consistently, the Indicated Mineral Resources improved 41.7%  to 269Mt grading at 1.65% Li20 at the Manono Project; 67% of the project’s resource falls under this classification. Besides, a reduction in Fe content was seen, which came down to 0.96% from 0.99%. Further, the by-products credits from Tin production at Roche Dure are expected to be included in Manono Project’s DFS. 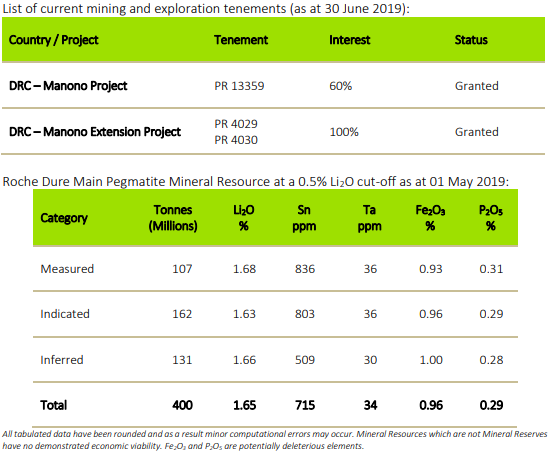 As per the release, the target time for the delivery of Roche Dure DFS remains Q1 2020. Also, the metallurgical works for Phase 1 are about to complete, and the results from communication test work are being reviewed. Besides, the company appointed a project manager for the Manono Project during the quarter. Further, on 9 July 2019, GR Engineering Services was awarded the engineering portion of DFS.

Accordingly, during the period, the company incorporated a strategic relationship with Huayou to propel the commercialisation of the Roche Dure prospect. Also, Huayou would provide expertise in the completion of DFS, financing, offtake finance, logistics and EPCM. Besides, the company is engaged with Zhejiang Huayou Cobalt Co via its parent Huayou International Mining (Hong Kong) Limited, who is a substantial shareholder of AVZ.

Reportedly, the company has increased the equity interest in Manono Project, this was executed via the operating subsidiary to increase 5% stake. Subsequently, it would result in 65% interest of AVZ in the Manono Project. Also, a payment of US$5.5 million would be paid upfront and the remaining amount in the next 36 months.

As per the release, the company announced results from the 5MTPA scoping study during the quarter. Also, the results depicted NPV10 of ~US$2.63 Billion, which is pre-tax and pre-royalties. Besides, the study was based on the concentrate sale price of US$750/tonne.

In an announcement dated 31 July 2019, the company reported the activities report for the quarter ended 30 June 2019. 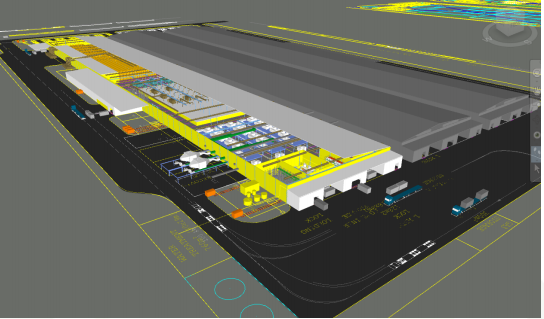 Reportedly, Magnis owns one third of Imperium3 Townsville (iM3TSV),during the quarter, iM3TSV had progressed on the feasibility study of lithium-ion cell manufacturing facility in Townsville, Queensland. Also, an initial draft has been submitted to Queensland Government in recent times, but it would be released in final format to the Queensland Government on or before 30 September 2019. The study confirms the suitability of the project due to market proximity to growing Asian economies, logistics support through Townsville port. Besides, the business case continues to grow stronger driven battery market fundamentals, increasing government support and local business engagement.

Further, the project appears economically beneficial with the prospect of ~1150 jobs in the high-tech industry, sustainable industry, supporting the regional economic imbalances while transitioning the county to lower carbon economy and associated industries.

As per the release, the company reports that several developments occurred during the recent months, and one significant result was processing of the oxide material as mined. Also, the company had emphasised on improving efficiency, and results have depicted >99% purity for the graphite products through utilising only four stages of floatation.

As per the release, the company’s technology partner Charge CCCV (C4V) supplied batteries to US based Martac, the company holds 10% stake in C4V. Also, the supplies included lithium-ion batteries based with the BMLMP cathode, and the size was 20KW. Besides, due-diligence has been ongoing for the New York battery plant funding.

On the financial front, the company had ~A$1.88 million in cash and cash equivalents on 30 June 2019, and the company has provided a loan of A$1.3 million to C4V, which is expected to be repaid in the next two quarters. Also, the working capital reimbursement to iM3TSV for $400k is anticipated by the conclusion of the September quarter.

Boart Longyear Limited is engaged in the business of providing products & services to the mining industry. It offers drilling services, drilling equipment and performance tools. 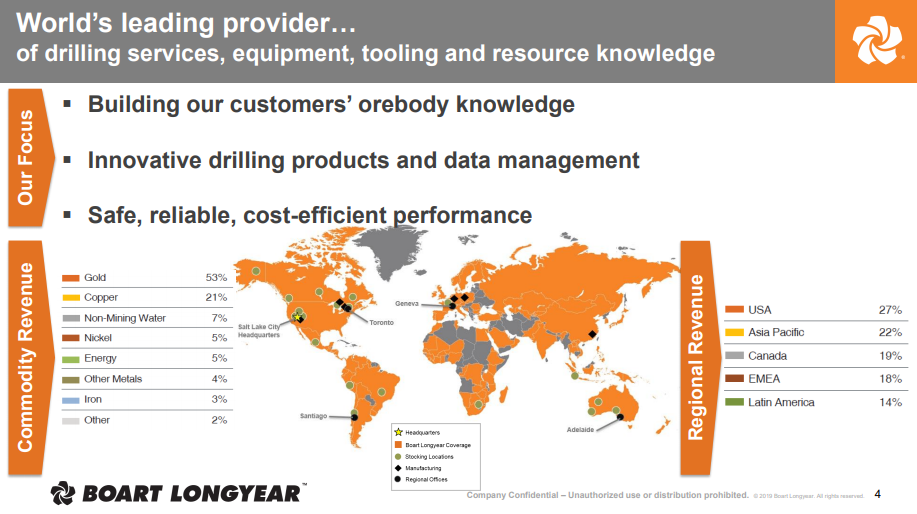 On 25 July 2019, the company updated on the capital structure of the company. Accordingly, the company has agreed with its financiers to alter the terms of facilities, which increases and extend the Asset Back Lending Revolver (ABL) and BackStop Term Loan Facility of the company.

Also, the amended debt provide the company with further liquidity on the ABL, and extension of facility maturities from 2020 to 2022.

The Asset Back Lending Revolver (ABL) with PNC Bank was increased by US$25 million to US$75 million, which would mature in July 2022. Besides, the BackStop Term Loan with existing lending partners remains unchanged on the principal size, but the scheduled maturity would be two months after the due date of ABL, which would be October 2022.