A company’s financial and operational performance is the most significant factor considered by an investor before making an investment decision. The information on these aspects is delivered by companies through their annual reports, that help investors identify the long-term growth prospects of companies. FY 2019 has just passed, and several ASX-listed firms are releasing their Annual Reports, affecting the Australian share market considerably.

The S&P/ASX 200 Index closed the trading session higher at 6471.2 points, with a rise of 0.5 per cent or 31.1 points on 27th August 2019. Moreover, three ASX-listed firms involved in the Resources sector have also ended the trading session in green on 27th August 2019, following the release of their annual results. Let us take a look at each one of them in some detail below:

A dynamic mid-tier mining and exploration company of Australia, Sandfire Resources NL (ASX: SFR) is a premier copper-gold producer that joined the ranks of Australian copper producers in 2012, post successful commissioning and construction of its 100%-owned DeGrussa Copper-Gold Mine that is situated at around 900km to the north of Perth in Western Australia.

Sandfire has recently released its FY 2019 annual results, highlighting its strong financial performance amid advancement in its growth and diversification strategy. The company delivered an outstanding net annual profit after tax of $106.5 million for FY 2019 attributable to its equity holders, despite a decline in copper prices during the year.

The revenue of the company (net of treatment and refining charges and price adjustment losses) improved from $570.04 million in FY18 to $592.2 million in FY 2019. The company produced 69,394t of contained copper and 44,455oz of contained gold from DeGrussa at a record low C1 cost of US$0.83/lb, signifying its best-ever operational performance and strong production in FY 2019. Sandfire reported strong cash flow of $210.4 million from operating activities for the year. 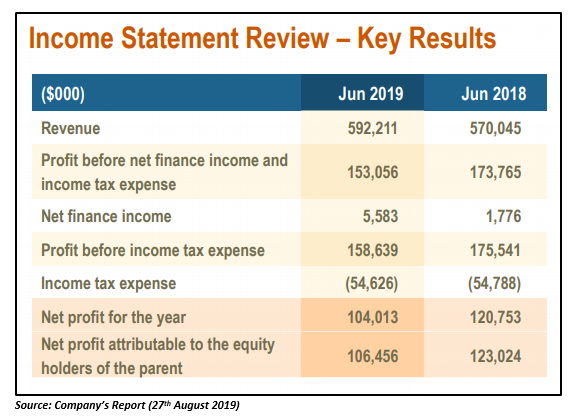 Maintaining its dividend stream from profitable operations, the company also declared a final fully franked dividend amounting to 16 cents per share for FY2019, following its interim dividend of 7 cents per share for 1H FY2019. The final dividend carries the payment date of 29th November 2019. As per the ASX, the annual dividend yield of Sandfire stands at 4.7 per cent.

On 27th August 2019, SFR ended the trading session at AUD 5.700, with a rise of 3.07 per cent relative to its last closed price. With ~1.47 million shares of the company in rotation, the stock’s market cap was noted at AUD 882.36 million at the time of writing the report. SFR has delivered negative returns of 25.97 per cent, 13.46 per cent and 16.97 per cent during the last six months, three months and one month, respectively.

A global uranium leader based in Australia, Paladin Energy Ltd (ASX: PDN) has two mines in Africa, including Kayelekera in Malawi and Langer Heinrich in Namibia. The company also holds a diversified portfolio of development assets in North America and Australia, with supreme uranium price leverage. The company has placed both of its mines on maintenance and care due to a consistent low uranium spot price and to protect shareholder value and resource.

On an operational front, the company notified that there was no production held in FY 2019 as the Langer Heinrich mine was transitioned to care and maintenance in August last year. 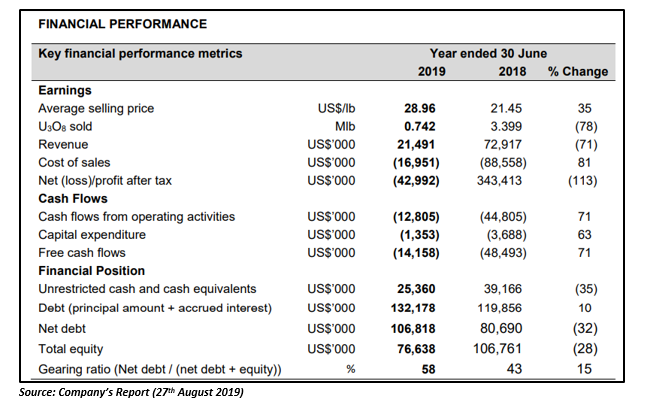 Following the release of its annual report on 27th August 2019, PDN closed the trading session higher on the ASX at AUD 0.135, up by 3.84 per cent in comparison to the previously closed price. PDN’s market cap was recorded at AUD 227.77 million. The stock opened the trading session at AUD 0.13, fluctuating between a high and low value of AUD 0.14 and AUD 0.13, respectively during the intraday session. PDN has generated a negative return of 21.21 per cent on a YTD basis.

The metal and mining giant, Aurelia Metals Limited (ASX: AMI) holds a dominant position in the highly prospective Cobar Basin. The company mines and explores metals including silver, copper, gold and zinc from its wholly owned Peak and Hera gold and base metal mines. The company has two major processing plants with a combined capacity of approx. 1.3Mtpa. 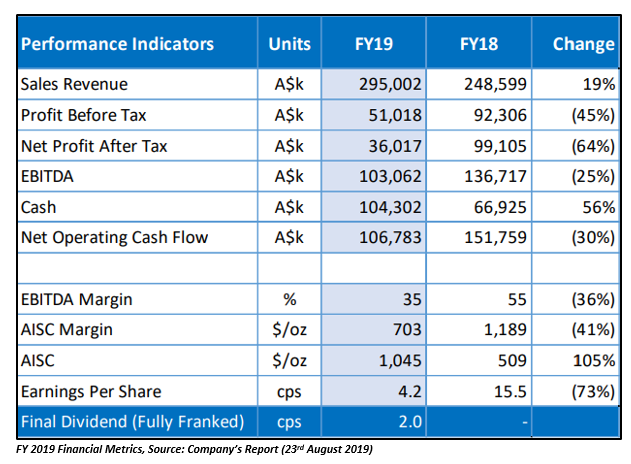 The company declared a fully franked dividend amounting to 2.0 cents per share for the six months ending 30th June 2019. The dividend valuing $17.4 million is to be paid on 2 October 2019, reflecting ~50 per cent of net profit and net cash generation in FY 2019. As per the ASX, the annual dividend yield of Aurelia currently stands at 3.74 per cent.