For the week gone by, S&P 500 made its all-time high of 3019.87, driven by technology stocks. Tech index NASDAQ also made new all-time high in the week to 8321.50. During the week, global semiconductor design & manufacturing company Texas Instruments Incorporated reported a USD 1.31 billion net income for Q319, down 7% from USD 1.41 billion reported during the same period a year ago. Its revenue for the June quarter stood at USD 3.67 billion, down 9% year-on-year from USD 4.02 billion registered in the year-ago period. The company, which attributed the fall in its revenue to broad-based weakness, indicated that the demand for microchips on a global level is unlikely to slowdown as long as feared. As a result of this statement, the company’s shares swung into a positive trajectory.

The week also saw US darlings Tesla and Facebook reporting a loss and a decline in net income for the second quarter, respectively. Let us have a broader look at how these two major US companies performed in their second quarter of the year.

Tesla Inc., founded in 2003 and specialising in electric car manufacturing, reported a GAAP net loss of ~USD 408.33 million in the second quarter ended 30 June 2019, compared with a loss of ~USD 702.14 million in the previous quarter. The company attributed significant reduction in its second quarter loss to strong delivery of vehicles as well as continued progress on efficiently managing costs.

Meanwhile, the company’s total revenue for the June quarter stood at ~USD 6.35 billion, up from ~USD 4.54 billion reported in the March quarter. Meanwhile, during the second quarter of the year, the company achieved record vehicle production of 87,048 units and vehicle deliveries of 95,356 units. The second quarter also saw a free cash flow generation of ~USD 614 million, backed by operational improvements and growth in vehicle production and deliveries. 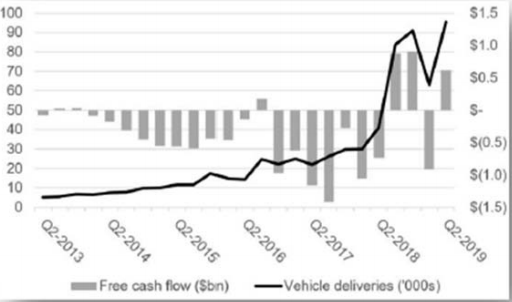 At the end of the quarter, Tesla had cash and cash equivalents of ~USD 5 billion, which is also the highest ever for the company. The American electric car maker expects to return to GAAP net income during the third quarter of the year. Moreover, in Q3 CY19, the automaker plans to focus on generating more cash and using cash in a sustainable manner. It will also expand its footprints in terms of vehicle production in new regions and roll out new models.

Another major American company Facebook reported a decline in its net income during the second quarter of 2019. The online social media and social networking service company’s net income for the June quarter stood at ~USD 2.62 billion, down 49% year-on-year from ~USD 5.12 billion in the year-ago period. However, the company reported a 28% year-on-year increase in revenue to ~USD 16.89 billion in Q219, compared with ~USD 13.23 billion in the same period a year ago. Below figure highlights the company’s financial performance during the second quarter.

During the month of June 2019, Facebook’s daily active user base grew 8% year-on-year to 1.59 billion, while monthly active user base as of 30 June 2019 stands at 2.41 billion, representing an increase of 8% from the same period a year ago. Its mobile advertising revenue grew 91% year-on-year and accounted for nearly 94% of advertising revenue for Q219. During the reported period, the company registered USD 3.78 billion in capital expenditures, inclusive of principal payments on finance leases. At the end of the June quarter, the company’s cash and cash equivalents and marketable securities reached USD 48.60 billion.

According to the company estimated figures, the daily user base of Facebook, Instagram, WhatsApp, or Messenger exceeds 2.1 billion people. Additionally, every month, over 2.7 billion people use at least one of Facebook’s services.

Facebook has reached a settlement with the Federal Trade Commission (FTC), under which it will pay a fine of USD 5 billion to the commission concerning a data privacy probe. The penalty is the largest to date fine imposed by the organisation on a tech company for violating consumers’ privacy. The fine amount is nearly 20 times more than the largest penalty imposed by any organisation related to data security across the world.

The settlement was made over allegations that the company inappropriately shared information related to its customers, to whom it had conveyed that their information would remain private on Facebook. The new accord requires the company to ensure that it keeps promises in the future.

Owing to the agreement reached between the FTC and Facebook on 24 July 2019, the company will also modify its corporate structure, requiring it to create an independent privacy committee of directors on the board. The committee will hold the responsibility of making decisions regarding the users’ privacy, ending for the first time the final authority of CEO Mark Zuckerberg over user privacy related decisions.

The settlement requires the company to keep a greater oversight on third-party apps and encrypt user passwords, as well as provide clear and visible notice regarding its facial recognition technology usage. Moreover, the company is barred from using telephone numbers of its customers for advertising that it obtained for security purposes. Additionally, the company is required to set up, deploy and maintain a comprehensive data security program.

Every day, over 85 million people use Facebook in the US and Canada. The company via targeted advertising monetises information of its users, and this accounted for most of its revenues in the year 2018.

Facebook has made a disclosure regarding facing a new antitrust investigation in its home country. The company was informed by the FTC about the antitrust probe in June 2019, according to a company statement. This investigation is completely different from the one which cost the company a whooping USD 5 billion settlement. Under the fresh probe, the company would be investigated in connection to violations related to the antitrust law of the country.

Additionally, the Department of Justice has unveiled its plans to start a broad antitrust review of the leading digital platforms in the country. However, no company names have been announced in relation to the department’s probe. Facebook is already facing several probes in Canada and Europe amid regulatory agencies’ efforts to crackdown on the dominating position of US tech giants like Facebook and Google.

As a result of probes, fines and regulations, the company expects a considerable raise in its expenses and sluggish revenue growth in the near future. All these events might result in the company changing its business practices that could be adverse for its business. Several hurdles seem to be on the road ahead for Facebook.